The historic sites of the National Park Service’s World War II Valor in the Pacific National Monument will mark Pearl Harbor Day on Sat., Dec. 7, with several events commemorating the 72nd anniversary of the day that instigated America’s entry into World War II.

With the theme, “Sound the Alarm,” this year’s commemoration will focus on the thousands of Americans who answered the call to duty in the wake of the attack on Pearl Harbor on the morning of Dec. 7, 1941. In the hours and days after the attack, many Americans had very little information about what had happened on Oahu. In some cases, it took months for families to receive the devastating news that they had lost their loved ones. In stark contrast, modern communication has replaced letters and telegraphs with the web, email and social media.

The “Sound the Alarm” commemoration of the attack will showcase the importance of communication, perhaps most impressively, by connecting Pearl Harbor survivors across the country via an interactive live online broadcast of Saturday’s harbor ceremony. During the Pearl Harbor ceremonies, attack survivors and other World War II veterans will be able to interact with one another and view commemoration day ceremonies in their own hometowns live.

At 7:55 a.m.—the exact time the Imperial Japanese Navy aerial attack began on Dec. 7, 1941—survivors, military officials and others attending the anniversary ceremony at Pearl Harbor (held in full view of the USS Arizona Memorial), will pause for a moment of silence. This year’s keynote will be given by Secretary Max Cleland of the American Battle Monuments Commission.

In honor of those who served on the USS Oklahoma during the attack on Pearl Harbor, the National Park Service will host a remembrance ceremony.

Marching in the evening parade with be attack survivors, military and government officials, marching bands and parade units from Hawaii and the Mainland. The parade will start at Fort DeRussy in Waikiki, and continue along Kalakaua Avenue to Kapiolani Park.

For more information on all of the above “Sound the Alarm”: 72nd anniversary Pearl Harbor Day commemoration:  events, visit the Pacific Historic Parks website. 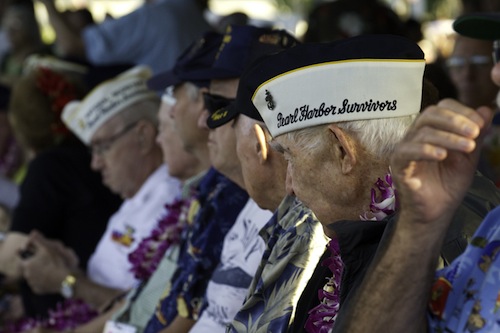 Seven decades after President Franklin Delano Roosevelt’s declaration of the day as “a date, which will live in infamy,” tangible evidence tied to the events of Dec. 7, 1941 is still visible at multiple Pearl Harbor locations. Machine-gun strafing holes from Imperial Japanese fighter planes still dot the now unused runway at Ford Island and airplane hangars at Hickam Air Force Base. Oil, sometimes called “black tears” still seeps up from the sunken USS Arizona, beading the surface of the water at the battleship’s memorial. The battleship is final resting place for many of the 1,177 crewmen who lost their lives during the attack and crewmembers who survived but wished to be interred there after their deaths. The number of American casualties on the day of the attack totaled more than 2,300 sailors, soldiers and civilians.

Nearly four years after the Pearl Harbor attack propelled the United States into World War II, Imperial Japan’s formal surrender took place in Tokyo Bay on Sept. 2, 1945, aboard the USS Missouri. The “Mighty Mo” battleship is now permanently anchored in Pearl Harbor, a ship’s length from the USS Arizona and its memorial.