The Koolau mountain range, as majestic as it appears today, ascending skyward like a verdant curtain of green on Oahu’s Windward Coast, looked very different just 500,000 years ago.

Then the western half of a million-years-extinct massive caldera—which extended eight miles between modern-day Kaneohe and Waimanalo, and four miles east to Kailua’s Mokulua islets—the range was part of a large, Oahu-dominating volcano, Koolau (Hawaiian for “windward”). A cataclysmic landslide event a half-million years ago changed the landscape of the island and the volcano forever, sweeping the latter’s entire eastern half and most of its caldera into the ocean.

The Koolau we now look upon in awe, then, is not a true mountain range, but the breathtaking result of eons of wind and rain erosion post-landslide. The combination of these forces of nature reduced what geologists believe was once a 9,800-foot shield volcano to its current 3,100-foot-high point, Konahuanui, and carved the signature fluted cliff face of the Koolau’s windward side.

Many of Oahu’s best hiking trails are here, ascending valley ridges rising inland from metro Honolulu and Central Oahu to the Koolau’s flora-rich summits and roughly 37-mile windswept spine, luring adventurers with the promise of complete escape into unsullied nature, remarkably close to modern urbanity. The most scenic of these trails often require practiced hiking skills, rugged stamina and full-day commitments, however, thereby keeping the Koolau wonderfully free of much human traffic. Images of its secret, little-seen wonders up close still stir the senses.

Oahu-based photographer David Chatsuthiphan’s love of hiking the Islands was born of his first-ever Koolau ascent in the summer of 2010 on the Kuliouou Ridge Trail. He’s since hiked 11 other Koolau trails, ranging from moderate-level summit-ascending hikes to expert-only treks along its often razor-thin spine, chronicling many of these in stunning photos on his website journal of outdoor adventures, Unreal Hawaii.
Here, we share a portfolio of images and stories from his Koolau journeys.- Derek Paiva 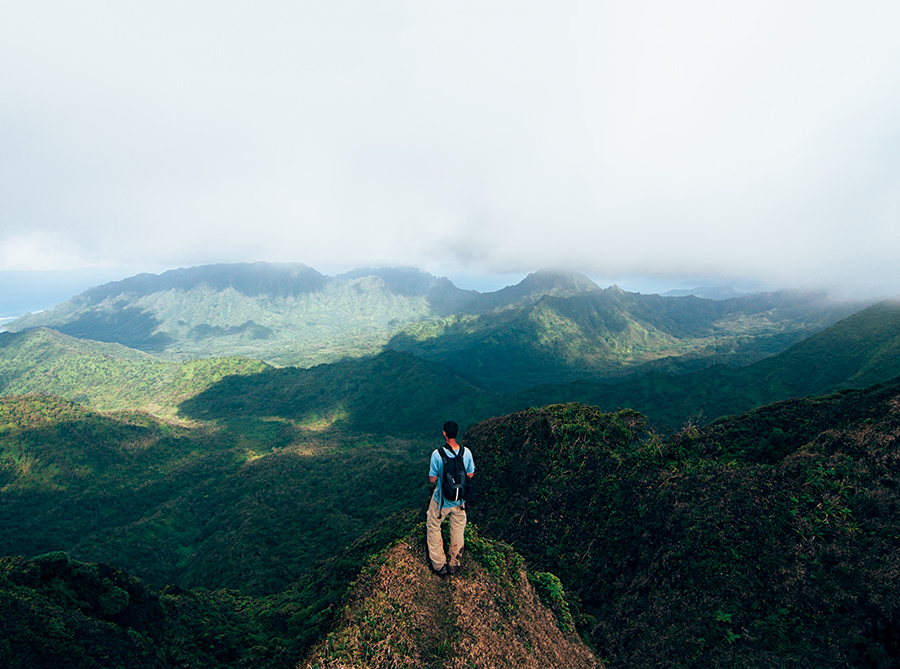 Standing above the Windward Side’s Punaluu and Kahana valleys, with the cloud-covered summit of Puu Manamana in the distance.
“The summit is so hard to catch on a clear day. Sometimes the whole thing is socked in,” says Chatsuthiphan. 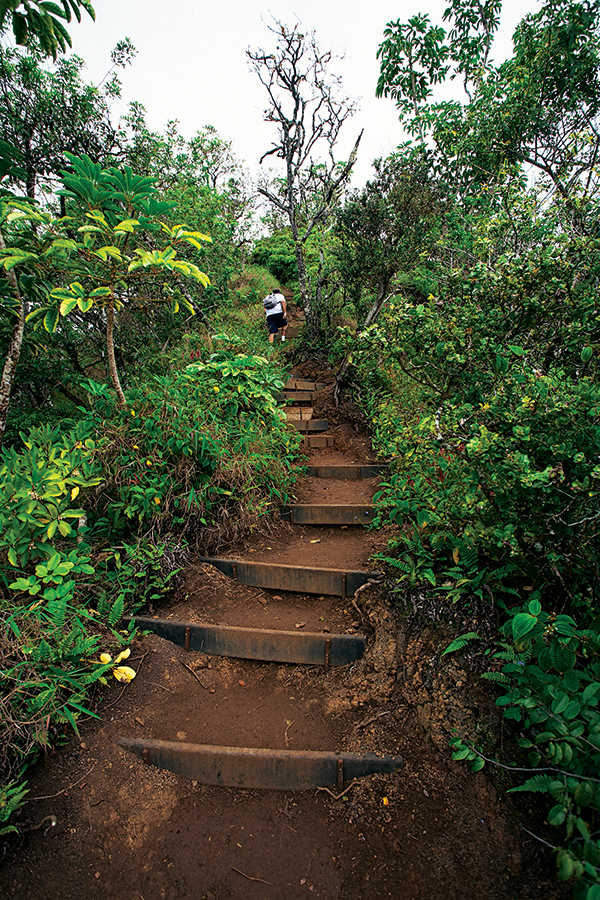 A wood plank stairway near the Kuliouou Trail summit.
“Finding stairs like these is awesome when you’re hiking,” explains Chatsuthiphan, “without them, this would likely be a channel where water would just erode the dirt.” 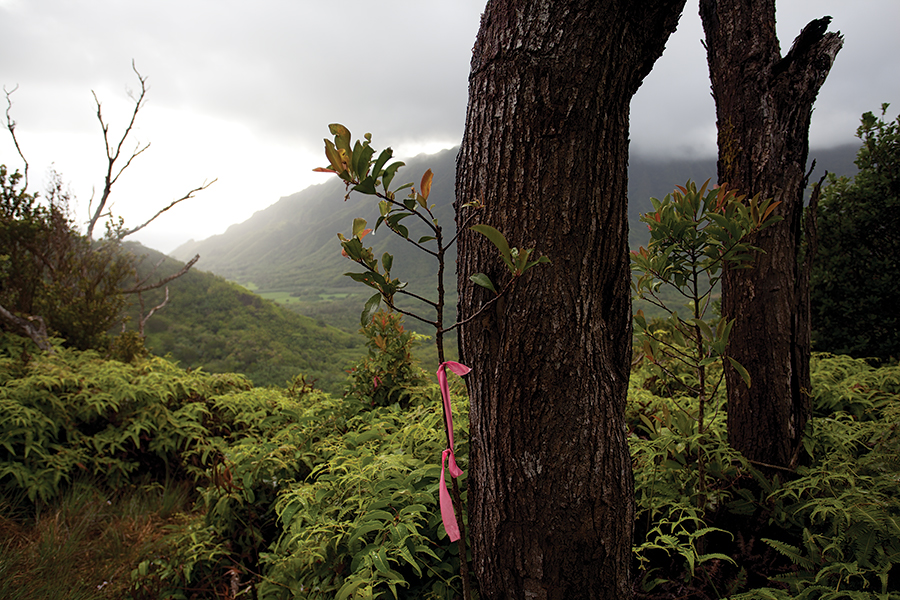 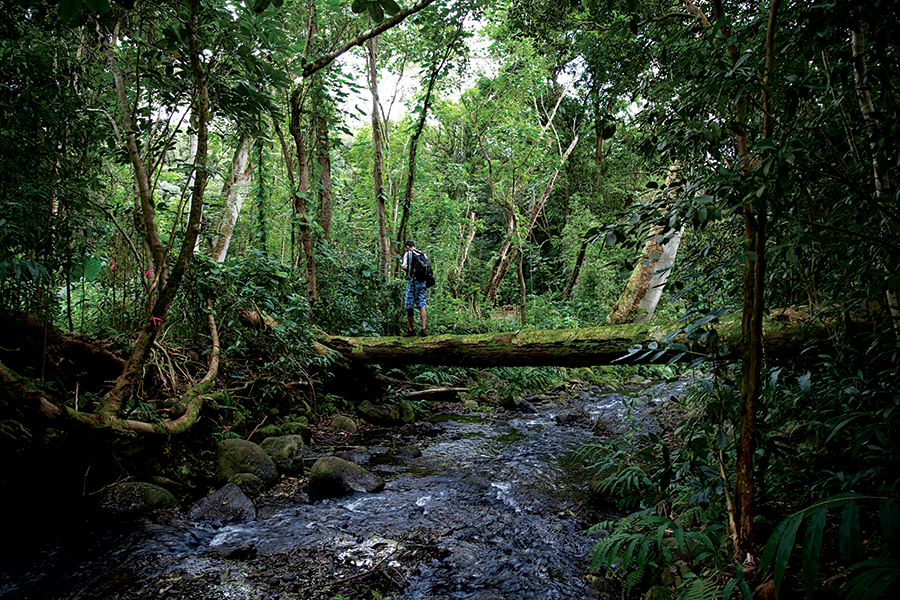 A fallen log makes crossing a stream at the base of the Koolau easier. 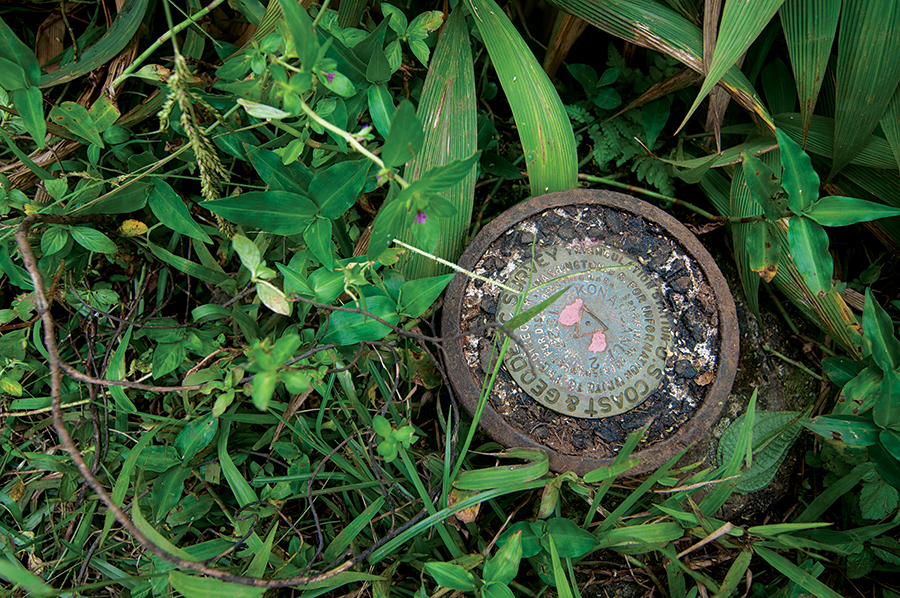 A marker, placed by the U.S. Coast and Geodetic Survey (now the National Geodetic Survey) in 1927, is the only permanent sign of human encroachment at the summit of Puu Konahuanui, the highest of the Koolau’s peaks. On clear days, Konahuanui’s summit can be seen from the far-below Nuuanu Pali Lookout, which the mountain neighbors. 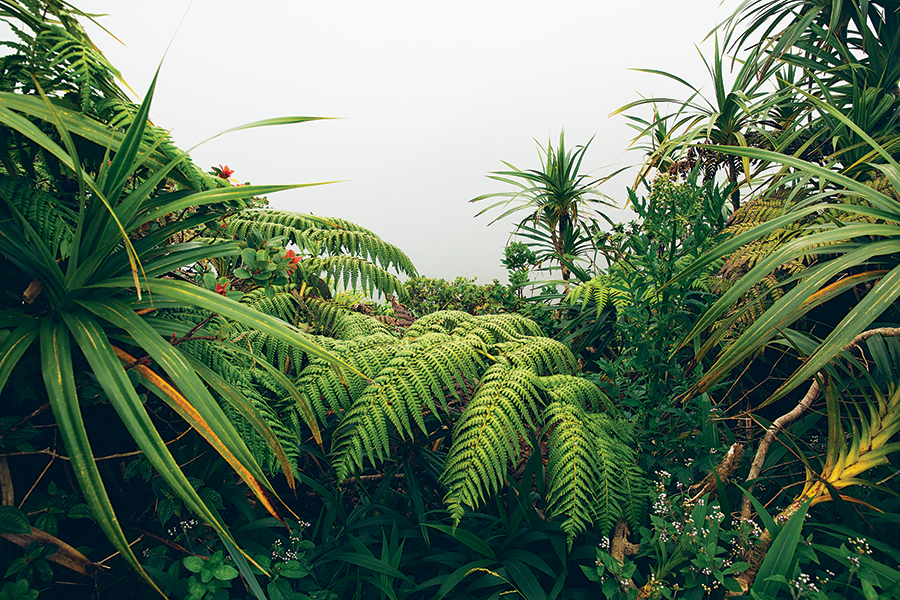 Cloud cover on the Konahuanui summit.
“For some reason, [cloudy] photos are some of my favorites,” admits Chatsuthiphan.
“The top of Konahuanui is super lush. It rains every day up there. It’s windy and it’s always muddy.
The first time I was up there it was clear. The next time, I was socked in, but it cleared up after about 15 minutes.” 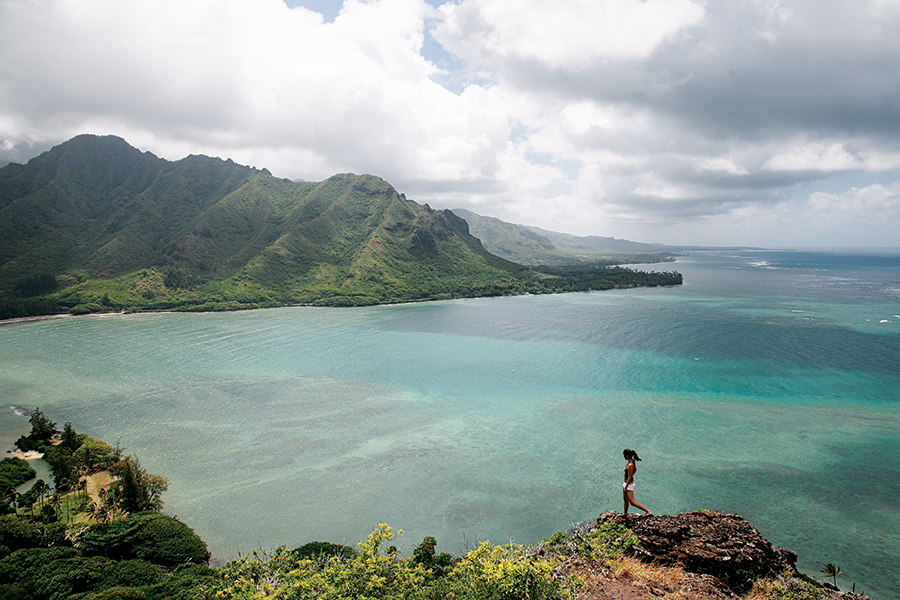 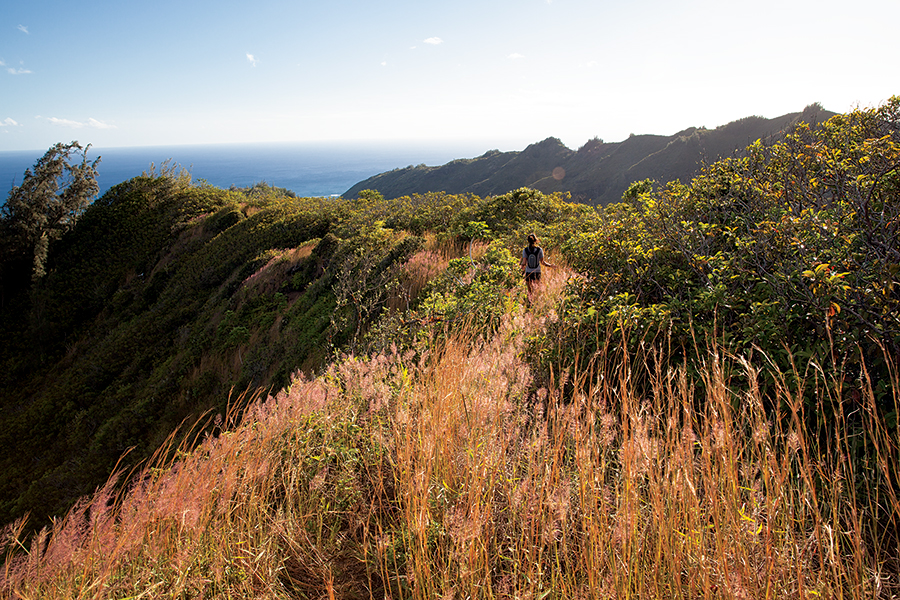 Afternoon on the Koolau’s southeast spine.
“We always hike in the morning. But for this one we were hiking in the afternoon, so by the time we were done, the sun was setting,” says Chatsuthiphan.
“This is almost at golden hour. The sun lit everything up. The colors were exploding. The grass turned pink.” 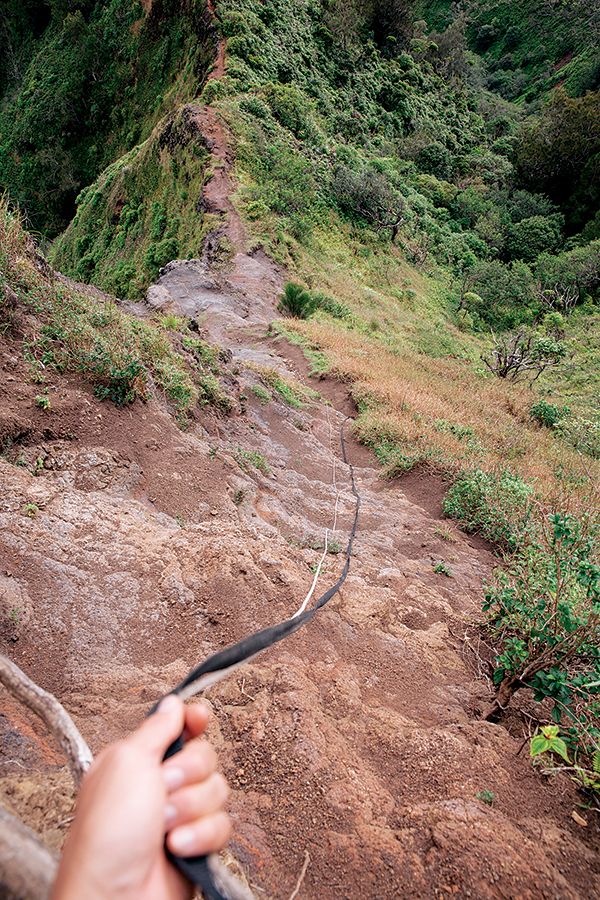 A guide rope for an eroded portion of a ridge trail. 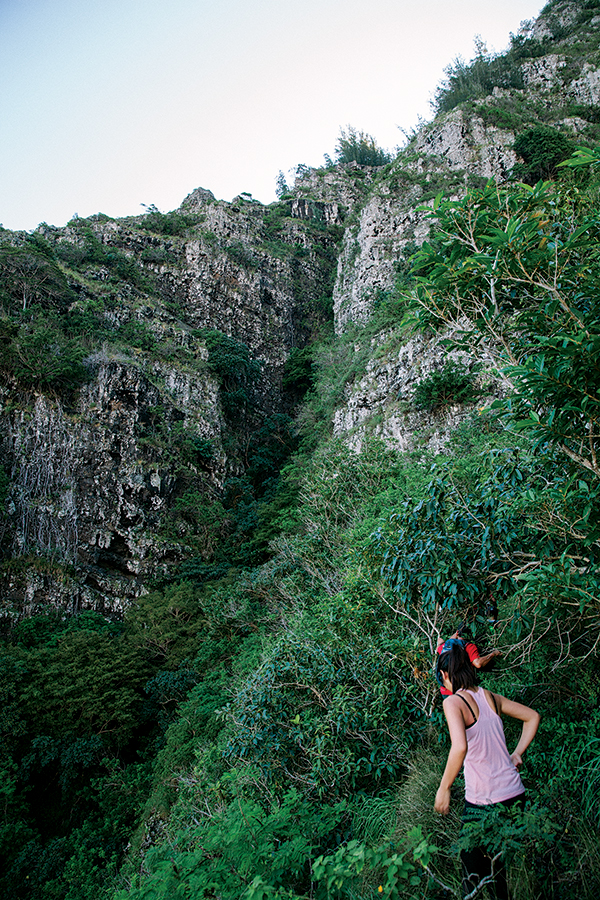 Eroded Koolau base rock on an extremely challenging ascent. 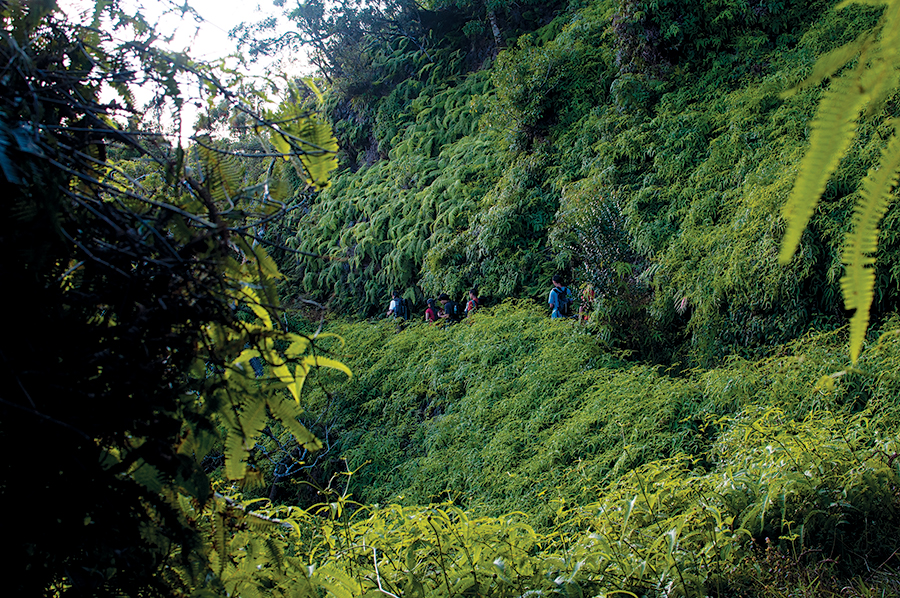 On the summit ridge-ascending Poamoho Trail.
“This is a state-maintained trail cut into the ridge in this portion,” says Chatsuthiphan.
“You don’t see this much. It’s a super-scenic hike but it needs a lot of planning.
It’s kind of long [seven miles round-trip]. And you’re always hoping it’s going to be clear at the top.” 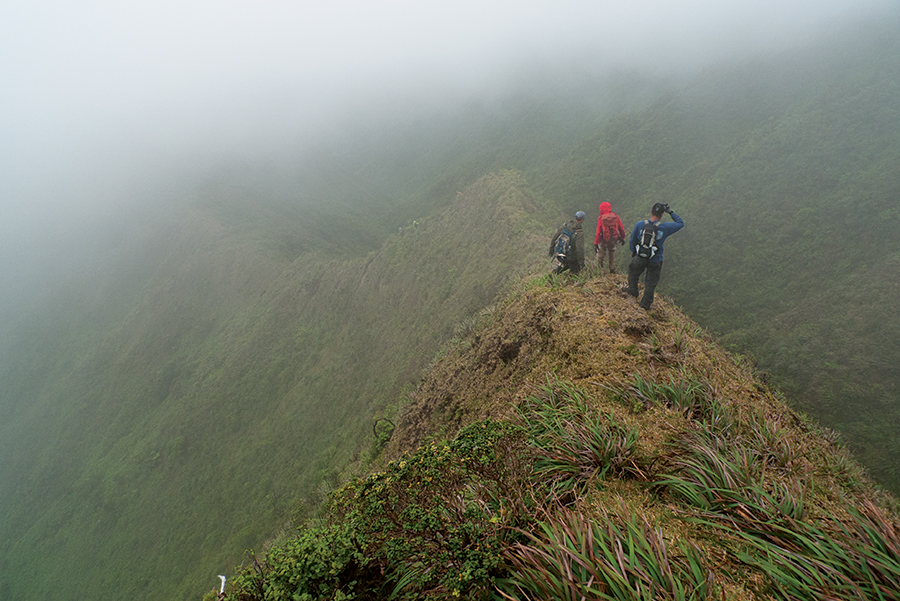 Afternoon ridge clouds.
“We’re really high up here, coming down a ridge from a summit,” explains Chatsuthiphan.
“The day had started off clear, but the summit got super cloudy. The clouds actually made [the hike] look more intimidating.
I like clouds sometimes because they hide all of civilization. If it wasn’t cloudy here, you’d be able to see [Central Oahu] homes off in the distance.” 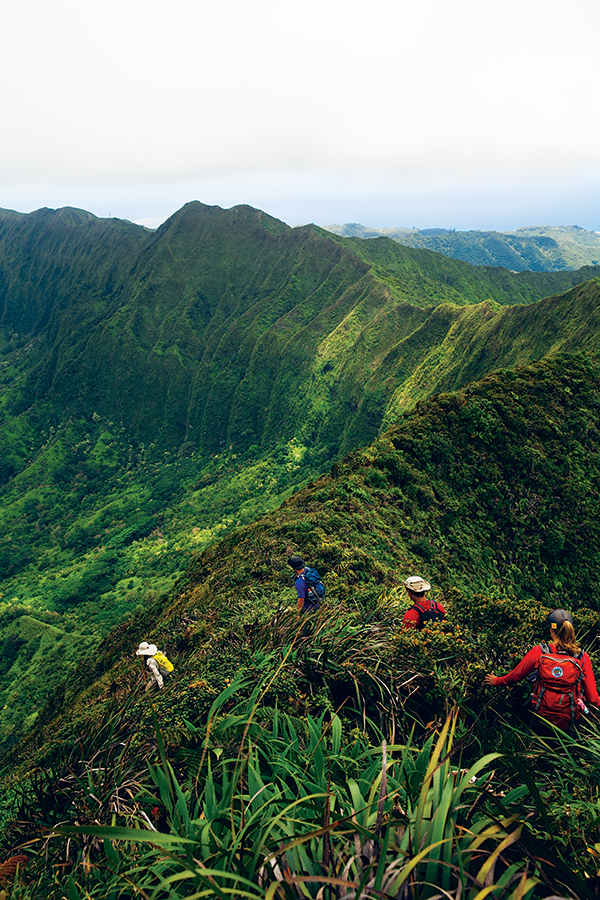 Hiking the Koolau spine. “We’re on the summit trail here looking south toward Makapu‘u Point and the windward side of the Ko‘olau,” explains Chatsuthiphan, “this is probably one of my favorite views on the island.” 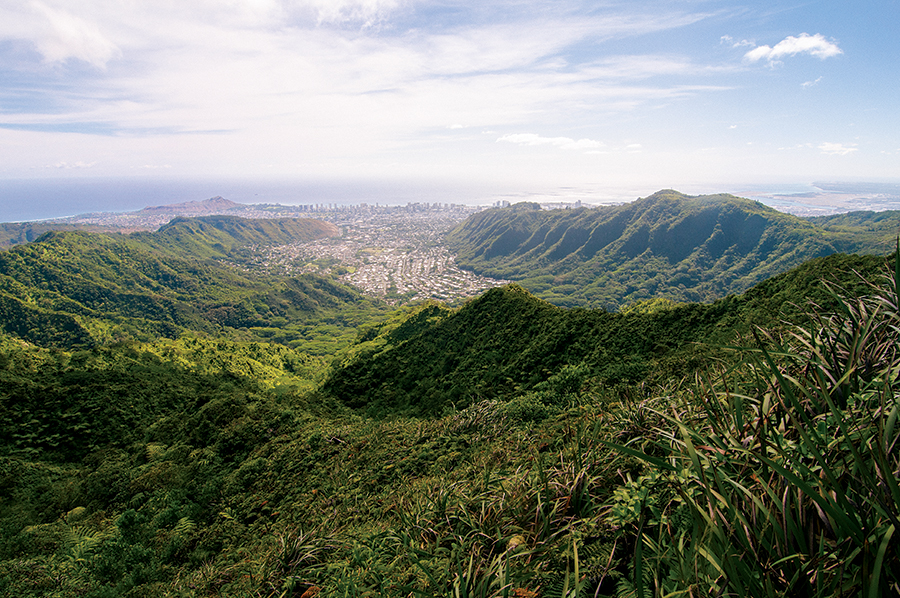 View of the back of Manoa Valley from the Ko‘olau spine, with Leahi crater (Diamond Head) and Honolulu in the distance. 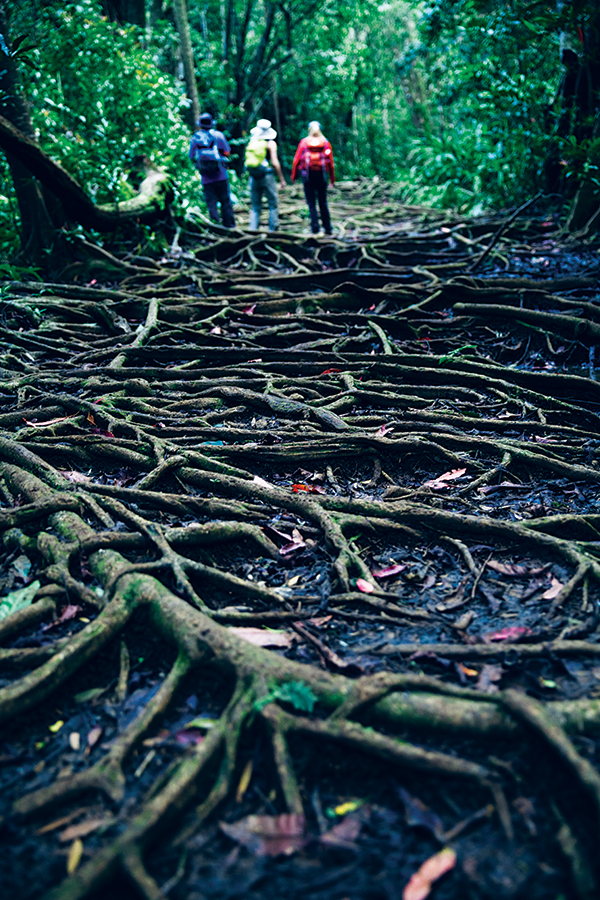 Tree root system on a Ko‘olau ridge trail. “We see this all the time on the trails,” says Chatsuthiphan, “they’re cool. But they’re the reason you want good shoes. When the roots are wet, they’re super slippery.” 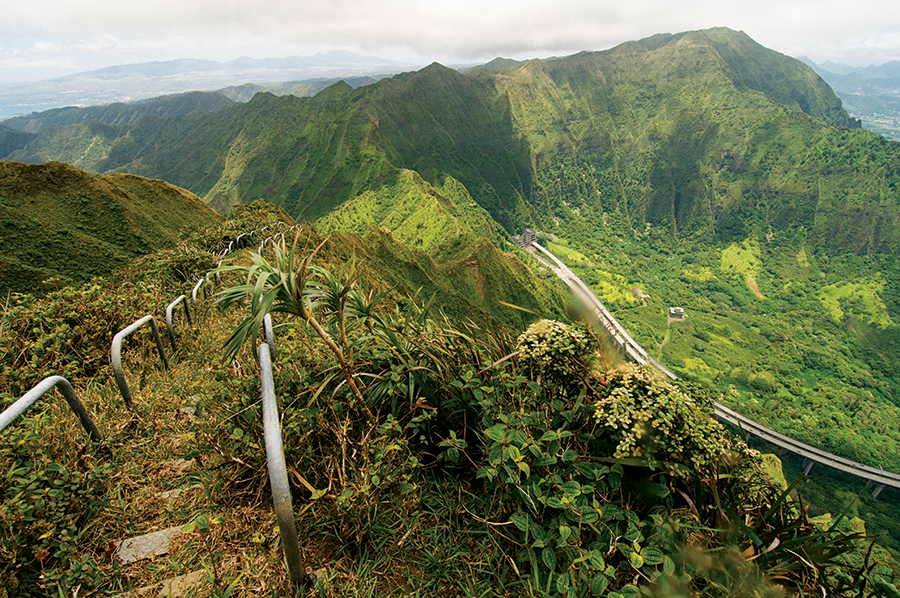 View of the Windward Side’s Haiku Valley from the old Haiku Radio Station site.
Commissioned in 1943, the station relayed radio signals to U.S. Navy vessels in the Pacific until the 1950s,
when the Koolau ridge-top site was taken over by the U.S. Coast Guard for a global Omega Navigation System.
A huge antenna stretched across the amphitheater-shaped valley from the site, prior to the station being closed permanently in 1987.
The metal stairway here marks the top of the closed-to-the-public Haiku Stairs. A ribbon of the H-3 Freeway cuts through Haiku Valley below. 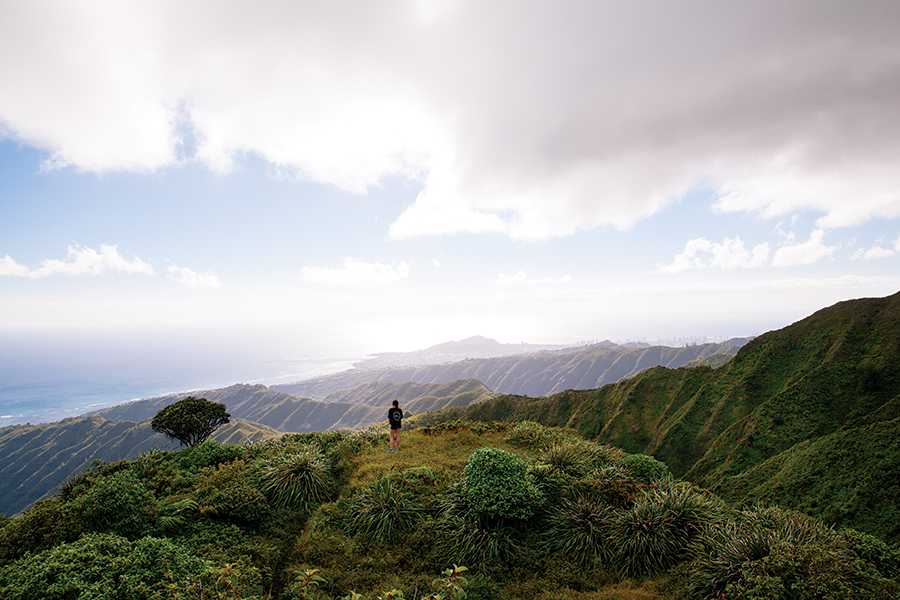 A small plot of grass on a Koolau summit trail provides a panoramic view of the ridges of Oahu’s southeast urban valleys and, at the photo’s center, Leahi crater and Waikiki.