Hulihee Palace — situated near the center of the Big Island’s historic Kailua-Kona area and known for its Hawaiian and Victorian artifacts — is hosting monthly heritage-focused days called An Afternoon at Hulihee Palace.

This month’s event, set for 4 p.m. Sun., July 15 on the palace grounds, remembers the late John Adams Kuakini (1789-1844). A cousin to King Kamehameha I and governor of the Big Island, Kuakini who built Hulihee Palace and Mokuaikaua Church, which sits directly across from the palace on Alii Drive.

The event is hosted by the Daughters of Hawaii and Calabash Cousins. In a news release issued by the nonprofit, docent coordinator Casey Ballao said: “Kuakini first built Mokuaikaua Church, finishing in 1837.” She added, “That same year, he started construction on Hulihee, with the excavation of the cellar. Kuakini employed craftsman and laborers that had jumped sailing ships to build his grand home and it was completed in 1838. It was a great source of pride.”

Kuakini didn’t enjoy his mansion for long, though. He died six years later, at age of 54. His obituary stated he was “the sole survivor of the iron-hearted chiefs that constituted the household of Kamehameha I.” Princess Ruth Keelikolani (1826-1883), the half-sister of King Kamehameha IV and V, inherited Hulihee after the death of her husband, William Pitt Leleiohoku. (He was the adopted son of John Adams Kuakini.) 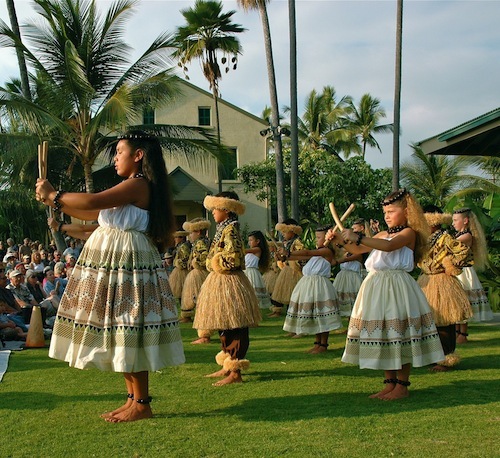 Afternoon at Hulihee is part of the palace’s series of free monthly events that honor Hawaii’s past monarchs and historical figures. Donations are appreciated. If you go, bring a beach mat or chair as seating won’t be provided.

Many of the artifacts are tied to the era of King David Kalakaua, who ascended to the crown in 1874 and reigned until his death in 1891. Two years later, the monarchy was overthrown and a provisional government took shape. Hawaii later became a U.S. republic, territory, and finally, in 1959, the 50th state in the union.

The Daughters of Hawaii group serves as the palace caretaker. The organization was founded in 1903 and opens membership to any woman who is directly descended from a person who lived in Hawaii prior to 1880. Helping the Daughters in its efforts since 1986 are the Calabash Cousins; membership is available to all.

Hulihee Palace is open for self-guided tours from 9 a.m. to 4 p.m. on Tuesdays through Saturdays. Admission, which includes a self-guided tour brochure, is $6 for adults, $4 for seniors, and $1 for children under age 18. Volunteer docents are sometimes available to give guided tours. For additional information, click here.