After a stretch of nearly three decades punctuated by close calls with destruction-by-lava, the last residence in the Big Island’s Royal Gardens subdivision was consumed by Kilauea volcano’s flow over the weekend.

The subdivision’s last resident, Jack Thompson, and a videographer were evacuated from the area by helicopter on Friday. When Thomspon returned the next day for an aerial view, only some tin roofing and a water catchment were visible, according to news reports.

Previously, Thompson, a Royal Gardens resident for about three decades, had seen lava flows almost completely surround his home, which was once operated as a bed-and-breakfast called “Lava House.” In December, when lava flowed within 500 yards of his home, he told Honolulu-based Hawaii News Now (TV news, KGMB and KHNL): “After 30 years, you know, it’s not scary anymore.”

During 1983 — the year Puu Oo, a cinder cone Kilauea volcano’s eastern flanks, began erupting — lava flow destroyed houses and other buildings in Royal Gardens, which was then a largely undeveloped 1,800-acre community situated about 4 miles below the cinder cone. The subdivision consisted of 1,500 residential lots, and 75 homes had been built before the Puu Oo eruption. While the others were long ago consumed, until last week, Thompson’s property had always been fully spared. 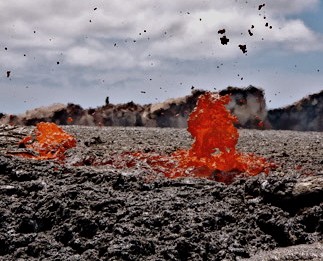 An image of the Royal Gardens area (pictured, top of page) was issued on Feb. 24 by scientists at the Hawaiian Volcano Observatory. It’s a composite image — an overlay of a thermal image on a normal photograph — showing active flows traveling from the Puu Oo to Royal Gardens. The names of roads not covered by lava are shown in white text. Thompson’s home — then last occupied residence — is just west of the Plumeria-Hoku intersection. Red and purple areas show recent, but inactive, flows, while the yellow and white areas are active breakouts. The image shows that the main active flow front is about level with Plumeria Street. Behind this flow, at the top of Royal Gardens, near Ekaha Street, is another area of active breakouts.

A photograph (pictured, below) shows what remained of Royal Gardens in December. Thompson’s home is the in the upper third (center) of the green oval area.

Below is an observatory-issued summary highlighting recent volcanic activity tied to the ongoing 29-year Puu Oo eruption, among the longest-lasting Hawaiian eruptions in recorded history. The first written accounts of eruptions in Hawaii date back to the 1820s, when American missionaries arrived on the Big Island. 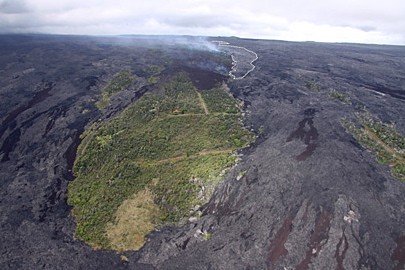 “The eruption in Kilauea’s middle east rift zone started with a fissure eruption on January 3, 1983, and has continued since at Puu Oo cone, or from vents within a few kilometers to the east or west, with few interruptions.” The summary continues: This year, “in early August, the Puu Oo crater floor collapsed to a depth of about 245 feet below the east rim of the crater as lava burst from vents on the lower west flank of the cone.” Lava reappeared in Puu Oo on Aug. 21 and filled the crater. On Sept. 21, “a fissure eruption on the upper southeast flank of Puu Oo drained lava lakes and fed a lava flow advancing in a southeast direction. Since then, activity has waxed and waned, with a lava tube feeding slow-moving pahoehoe flows to the southeast — into Royal Gardens, with some flows spreading to the coastal plain (within a few kilometers of the ocean).