Lanai has always been the definition of home for Grant Kaye.

Of his 36 years, the Oahu-born photographer has been a fulltime resident of the island for only four—from the days following his birth up until his parents, Robin and Sally, moved the family to Pennsylvania just as Kaye was about to begin school. Now living near Lake Tahoe, Kaye returns several times annually to visit his parents who, a decade ago, finally moved back to retire in the home they long ago bought, moved away from, but always kept on Lanai.

Ultimately assuring Kaye could call nowhere else in the world home, however, were the summer vacations he’d spend on Lanai from grade school through his high school graduation—times spent reconnecting with friends, his extended hanai ohana (adopted family) and the island itself. On Lanai, the Pennsylvania kid would revel in days and nights spent spearfishing, camping, beaching and exploring with his summer buddies. Guided and educated by family friend “Uncle” Albert Morita, a game warden who was raised on Lanai, Kaye found the little-populated, largely undeveloped 140-square-mile island an undiscovered country ripe for exploration.

“Every trip back, my dad and I would spend as much time as we could with Uncle Albert, who would always want to take us to somewhere that we’d never been before,” remembers Kaye. “His family had lived on [Lanai] forever and he had such a deep love for the island and still does. We’d go to see petroglyphs or a heiau, always someplace different.”

Those summers also offered Kaye a window onto Lanai changes both subtle and manifest, from the 1992 shutdown of the island’s economy-dominating 70-year-old Castle & Cooke/Dole Food Co. pineapple operations to its turn toward a tourism-based economy at the hands of California billionaire David Murdock. Murdock’s 1985 purchase of Castle & Cooke gave him 98 percent ownership of Lanai’s lands, which he eventually sold to another billionaire, Oracle Corp. co-founder and chairman Larry Ellison, in 2012.

Ellison has since spoken of his intent to grow his purchase into a super-luxury visitor destination while preserving much of Lanai’s current landscape and lifestyle, and create a self-sufficient green community for the 21st century. News stories have chronicled positive Ellison projects, such as the restoration of island cultural sites and a long-shuttered Lanai City community swimming pool, as well as the controversial planning of a third large-scale resort on Lanai’s untouched northeast coast, among other projects.

On visits home in November 2013 and February 2014, Kaye began photographing the Lanai landscapes collected here with a clear-eyed, very personal mission in mind.

“First off, I just really wanted to share how beautiful the island is,” says Kaye. “I think a lot of people have a misconception of Lanai as being a dry, barren wasteland that’s not worth visiting. But it’s really very diverse, beautiful and full of stories, places, history and so much mana (power) and culture that I feel privileged to have experienced because of my family’s connections to the island.”

Kaye also wanted a document of places “tied to really strong memories of my childhood and people,” not because these were necessarily slated for change or destruction, but because the precise certainty of change is unclear. (A second collection of Lanai photos by Kaye, focusing on residents of the island, will be published in HAWAII Magazine later this year.)

“I want [people] to take away that Lanai is a special place that’s worth protecting and worth saving because it represents something that everywhere in the state used to be,” says Kaye. “If I did my job with these photos, they’ll get a sense of that.” 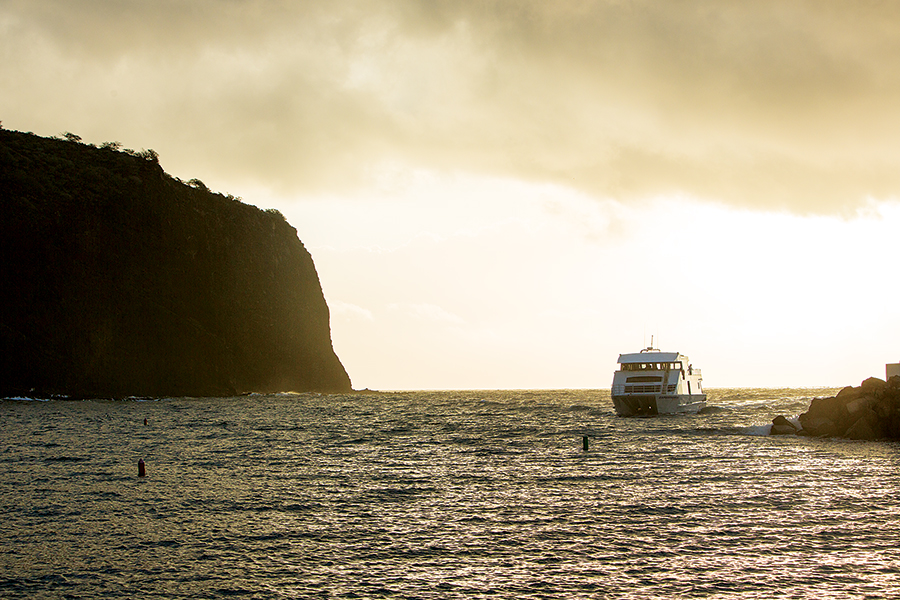 Arrival of the interisland Maui-Lanai Ferry. “The ferry is the island’s lifeblood. Everybody goes to Maui for shopping or to see the doctor. Stuff is really expensive and limited on Lanai, so the ferry is crucial to being able to live there.” 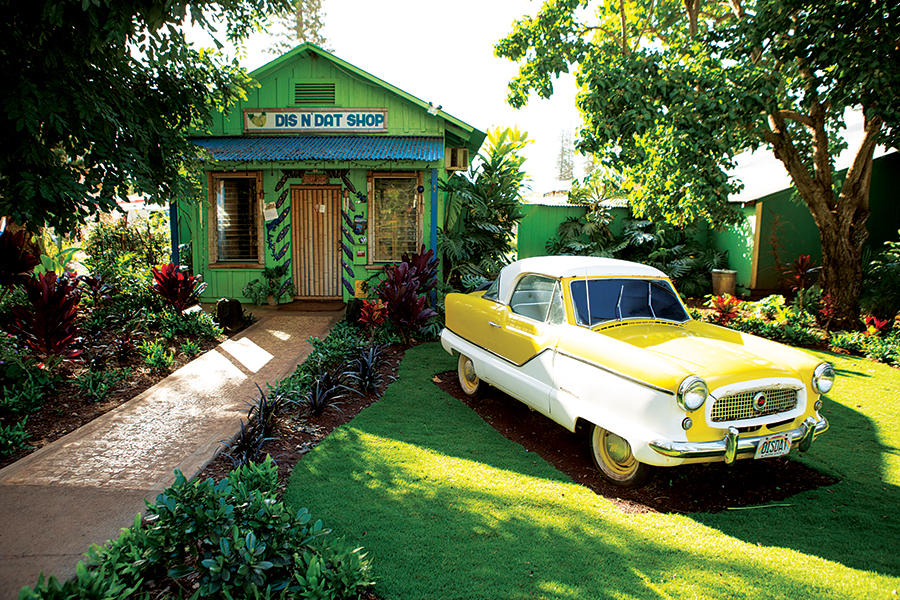 Their construction dating as far back as the 1920s, the structures housing the businesses surrounding Lanai City’s town square and Dole Park are largely the same in architecture and square footage. “Every time I would return while growing up, there’d always be a new store or a new restaurant opened by someone who’d moved here from off-island. It always was and still is really difficult for people to open retail establishments because [many properties], with few exceptions, were owned by [Dole] and now Ellison.” 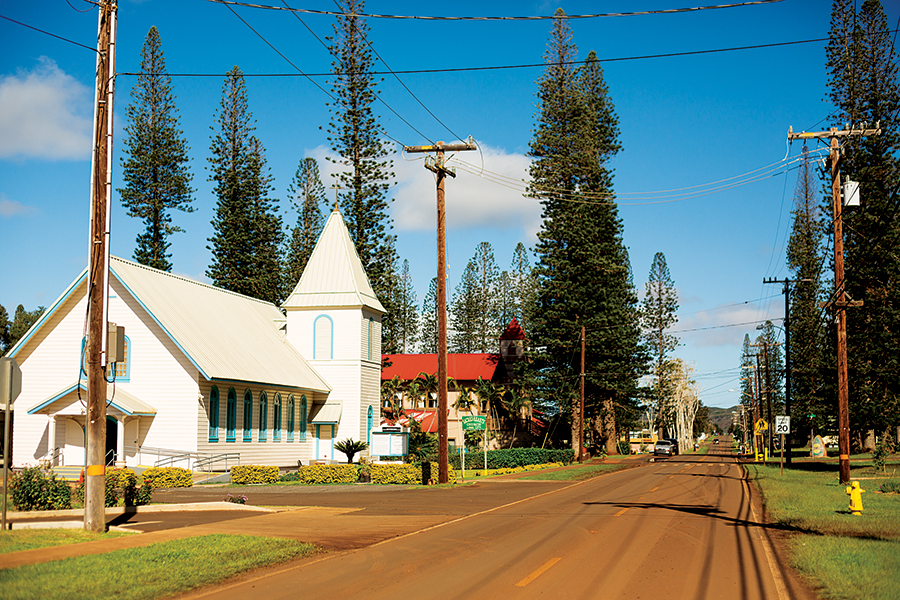 Morning traffic in Lanai City near Dole Park. “This was actually a pretty quiet morning and not what [traffic] looks like most of the time these days.” 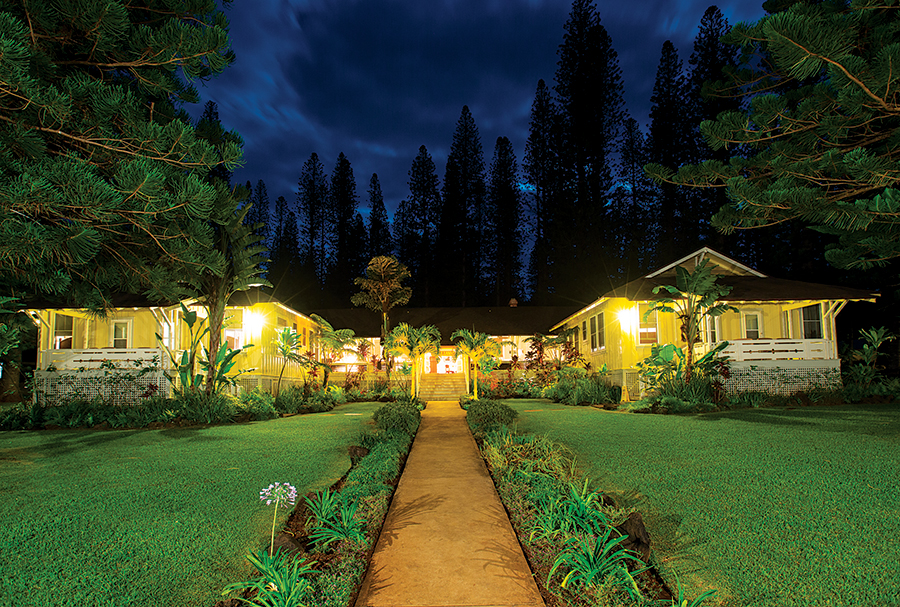 Built in 1923, Hotel Lanai was the island’s first lodging property, constructed by James Dole, then-president of the Hawaiian Pineapple Co., to house visiting company executives. (The company was renamed Dole Food Co. in 1991.) “The Cook pines behind the hotel are a distinguishing characteristic of Lanai City.” 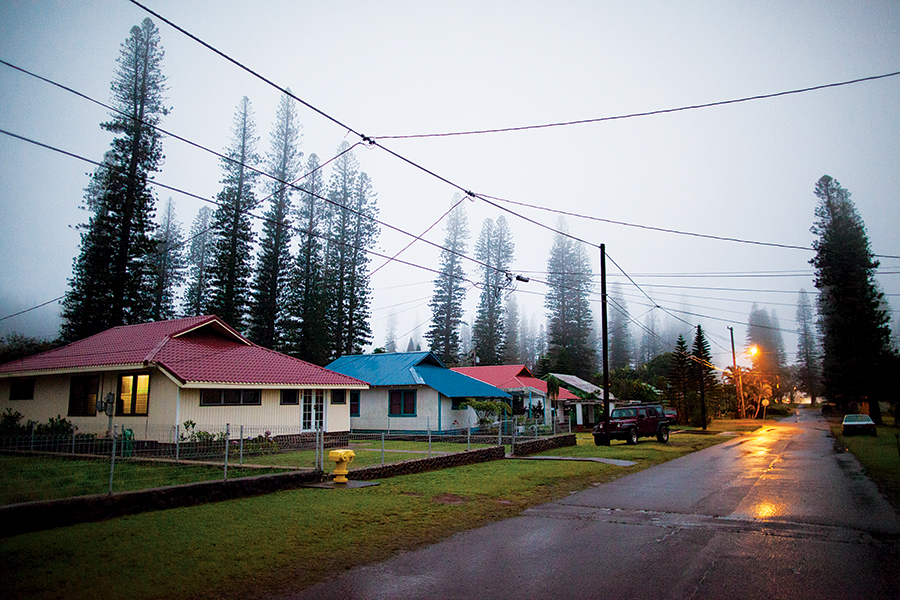 Lanai City residences on ‘Ilima Street. “I shot this really early in the morning as we were getting up to go shopping on Maui. It’s 6:30 a.m., very misty and rainy. My parents’ home is behind me.” 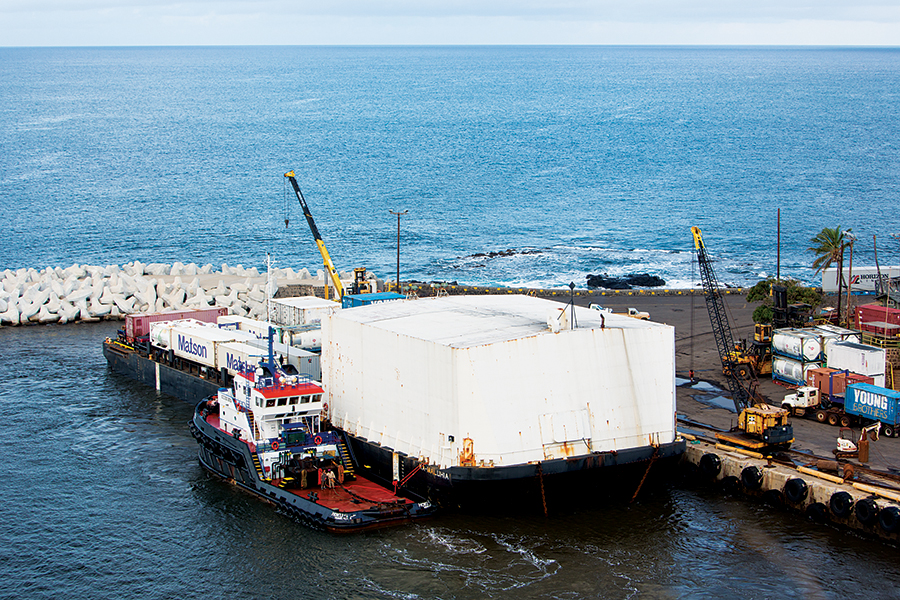 Barge Day at Lanai’s only port, Kaumalapau Harbor. “The Lanai barge comes in once a week [on Thursdays]. It’s another lifeline and how a lot of groceries and large items like cars get to Lanai. On Wednesdays, if you want to make cookies, need milk and can’t find it at the store, you’re out of luck. After the barge arrives, everybody goes to the store.” 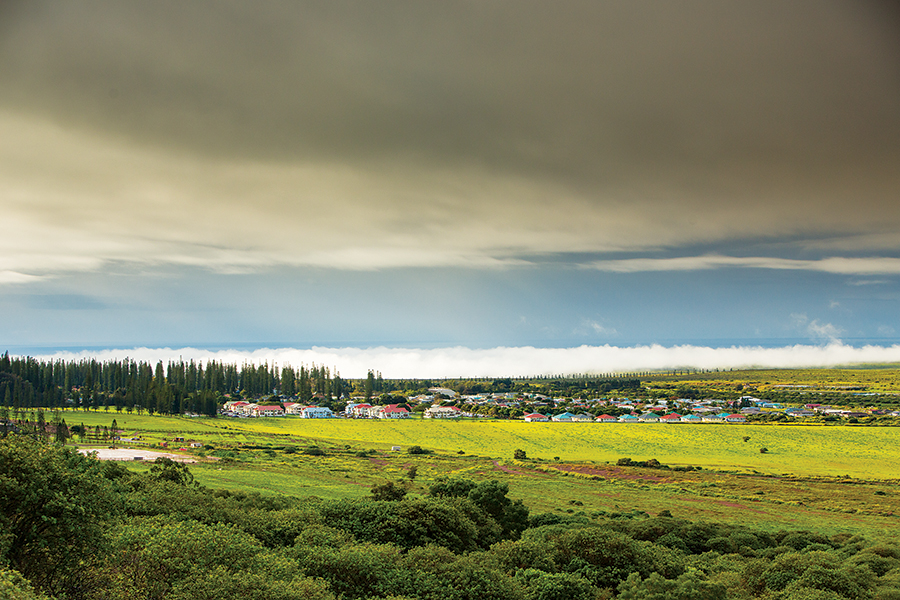 View of Lanai City. “There’s a bend in the road heading to the Keōmuku coast where everybody pulls off to get a look at the city. I was really angry at the rain while driving around. The rain stopped just as I got here and the sunlight shined through for two minutes. You can see the mist over the Pālāwai Basin past the city and the ocean on the other side of the mist.” 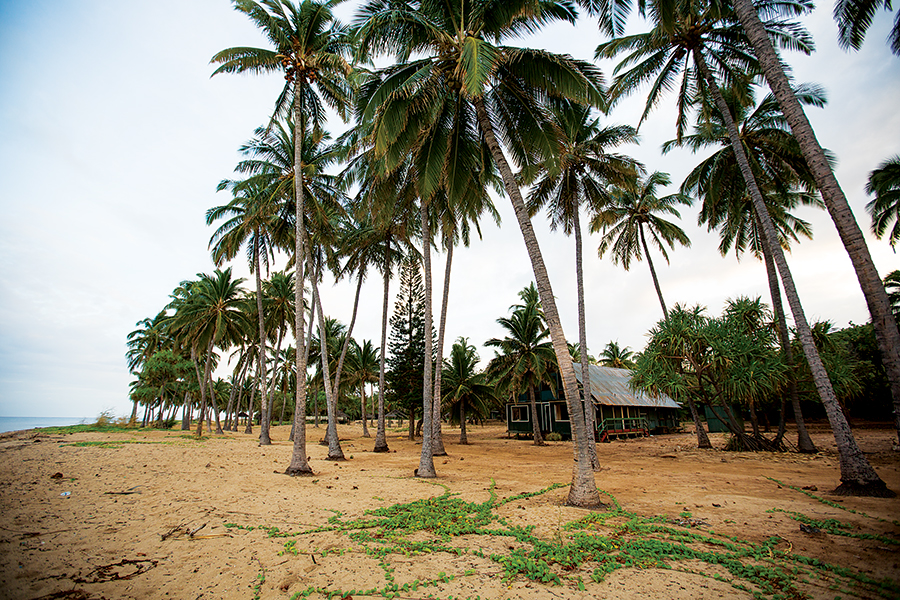 Club Lanai site at Kahalepalaoa Beach. Pulama Lanai, Ellison’s management entity for his Lanai holdings, is proposing the island’s third major resort property—to join the existing Four Seasons Resorts Lanai at Manele Bay and Lodge at Koele, both constructed in the early 1990s—for this beach on east Lanai’s Keomuku coast. “I have mixed memories of this place because I remember what it was like when it was operating as Club Lanai. Day trips were run here [from Maui] for snorkeling. And it was weird driving here from Lanai City and seeing a tour boat, tourists and people sitting around a bar. It eventually closed and got totally run down. But on this trip with my dad and Uncle Albert on one of our let’s-go-to-a-place-we’ve-never-been missions, it had been cleaned up.” 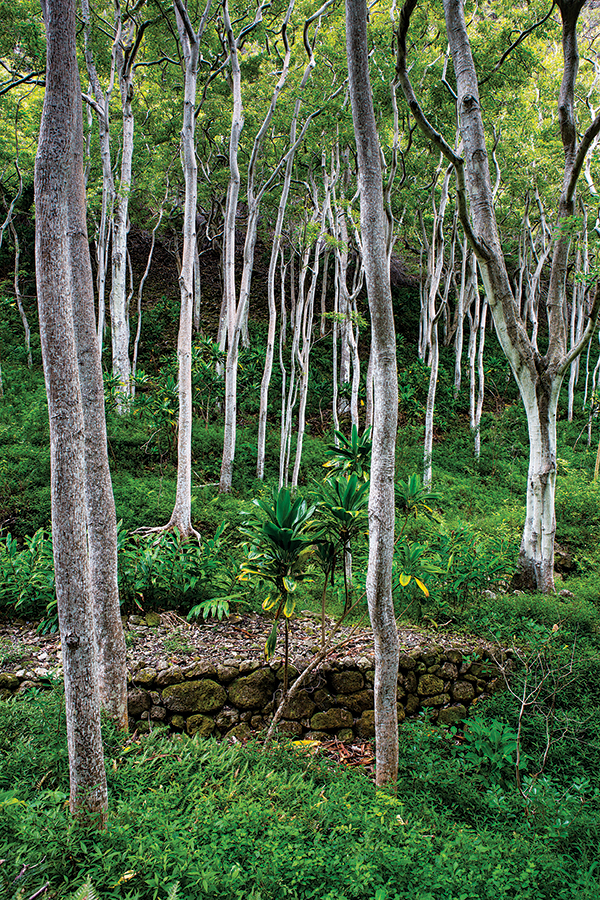 Early Hawaiian loi kalo (taro terraces) in Maunalei Gulch. “Maunalei is probably the most special place on the island. It’s closed and completely off limits because it’s where the island draws all the water from the aquifer. I was lucky to be able to go with a group from Pulama Lanai led by “Uncle” Kepa Maly, who’s the cultural director for Pulama. They’re restoring all the ancient structures there as well as the modern pump house. The light in this photo is natural. It was raining. Then the clouds parted and there was this crazy sunlight that came in sideways and made it look as if I had lit the trees.” 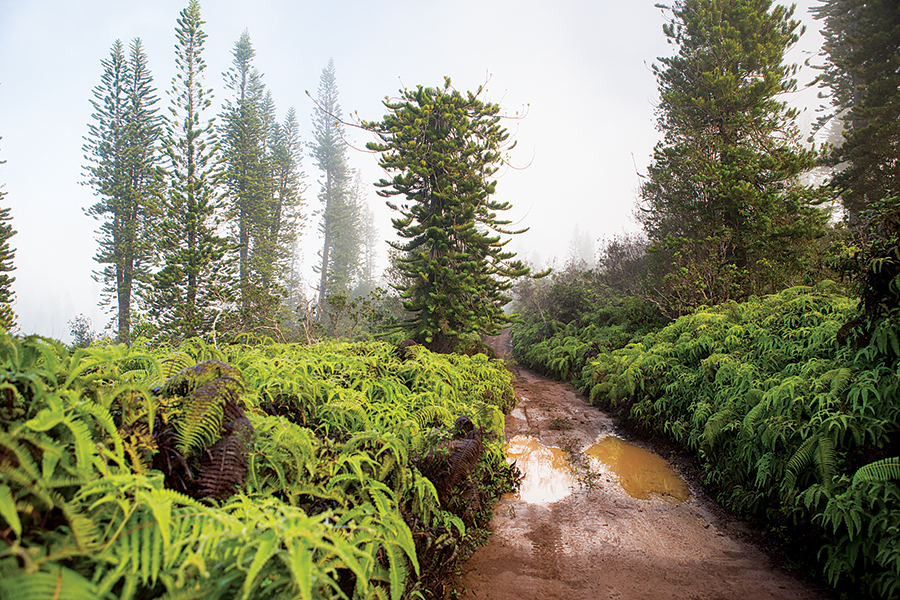 Munro Trail on the climb over Lanaihale. The 12.8-mile four-wheel-drive trail climbing the summit of Lanai’s highest peak was named for New Zealand naturalist George Munro, who arrived on island in 1890 and planted the lush, upland ohia lehua, ironwood, eucalyptus, pine and ‘uluhe fern forests above Lanai City. “Munro realized that, being in the rain shadow of Maui and Molokai, the island didn’t really have a perennial stream system. These trees catch the clouds and replenish the aquifer. The trail is a good three- to four-hour walk and really pretty.” 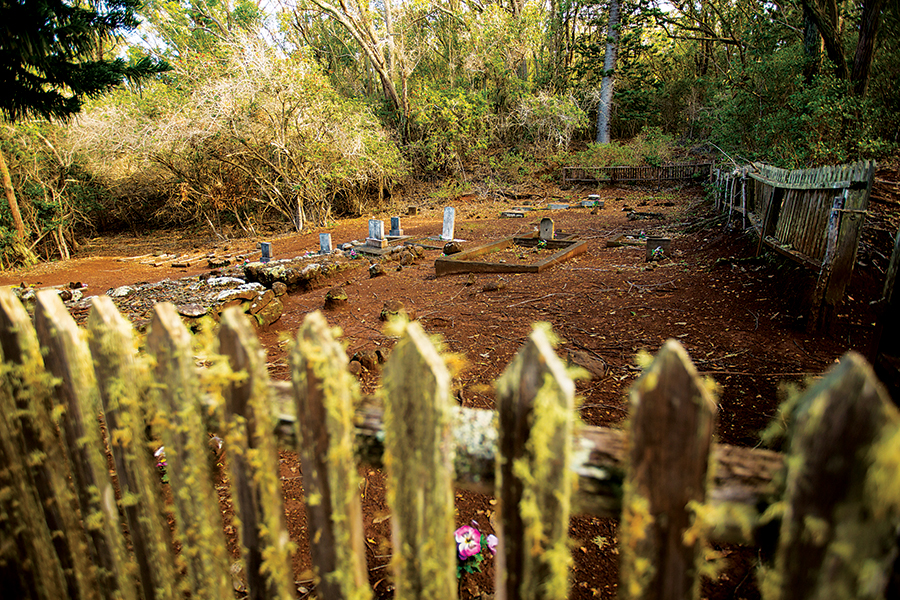 A Hawaiian cemetery near Koele. “My dad and I were visiting the graves of some of the older Hawaiian [residents] I remembered from when I was little. I’d heard about the cemetery, but had never actually been here before this trip. Being in the eucalyptus trees up here is always kind of spooky.” 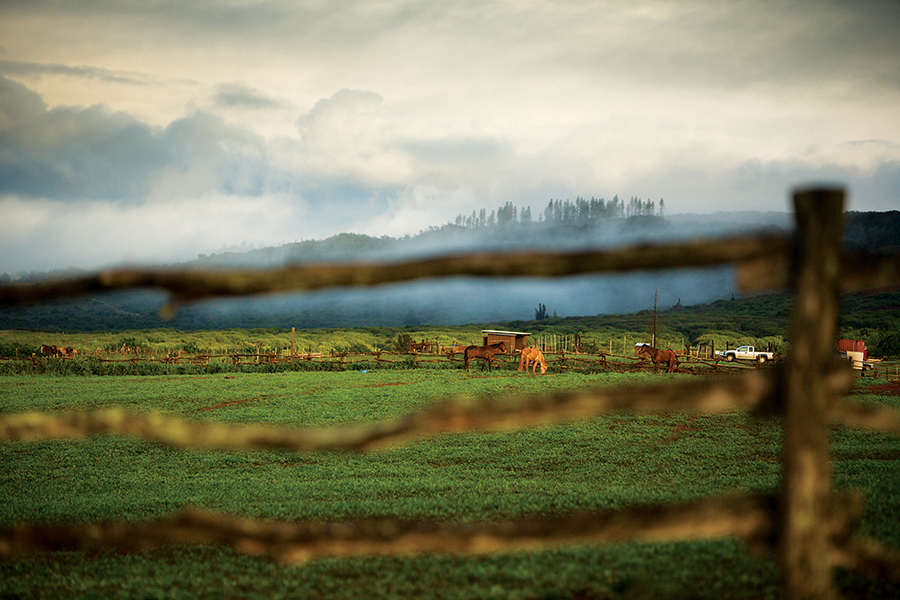 Koele Stables outside Lanai City. “Koele is a really special place for me because [we knew] the family that lived at the ranch that was here before [Lodge at Koele was built]. The horses are for hotel guests. I think this spot was all pineapple before the hotel.” 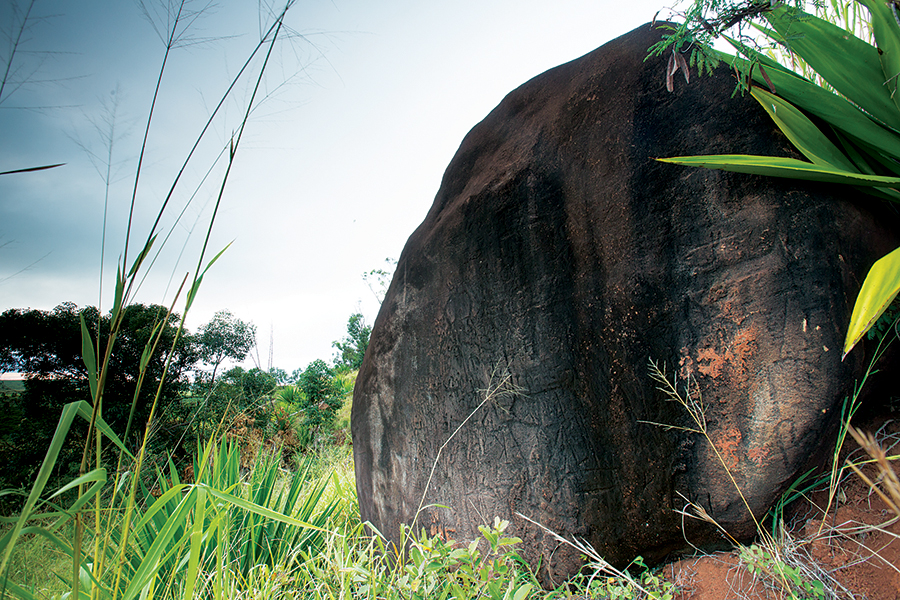 Luahiwa Petroglyphs. A hillside overlooking the former pineapple fields of the island’s massive Palawai Basin is strewn with large boulders like this one, most marked by engravings of indeterminable age. “The boulder in this photo is about the size of a car.” 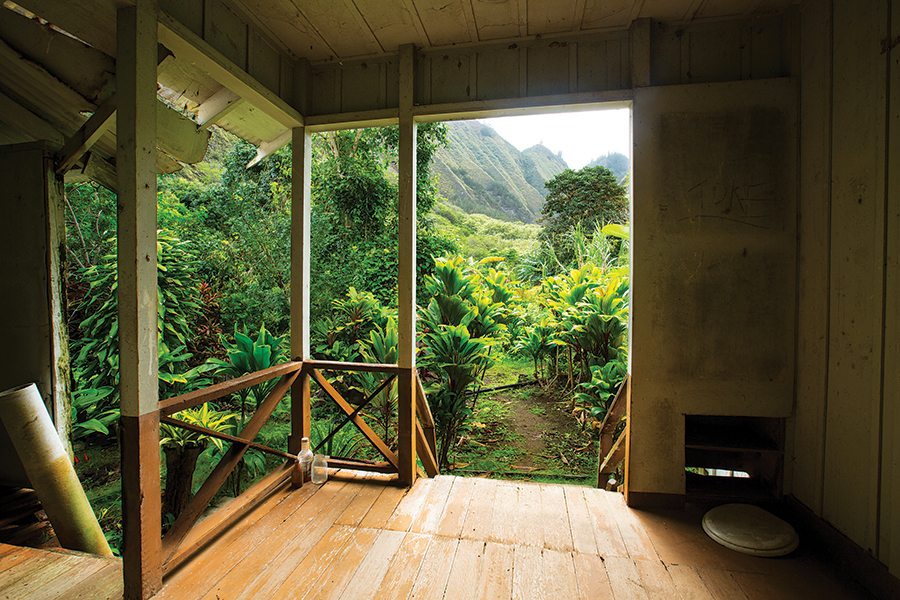 Abandoned Maunalei Gulch pump house caretaker’s residence. Built in the 1920s, the home’s porch opens to a stunning view of the verdant aquifer. “This is another protected place you can’t get to without permission. Pulama is working on a huge project to refurbish the property and turn it into a cultural center. The house is built onto the side of the pump station. Whenever we could get into the gulch as kids, we would wander around and see which parts of the house had fallen apart since our last visit.” 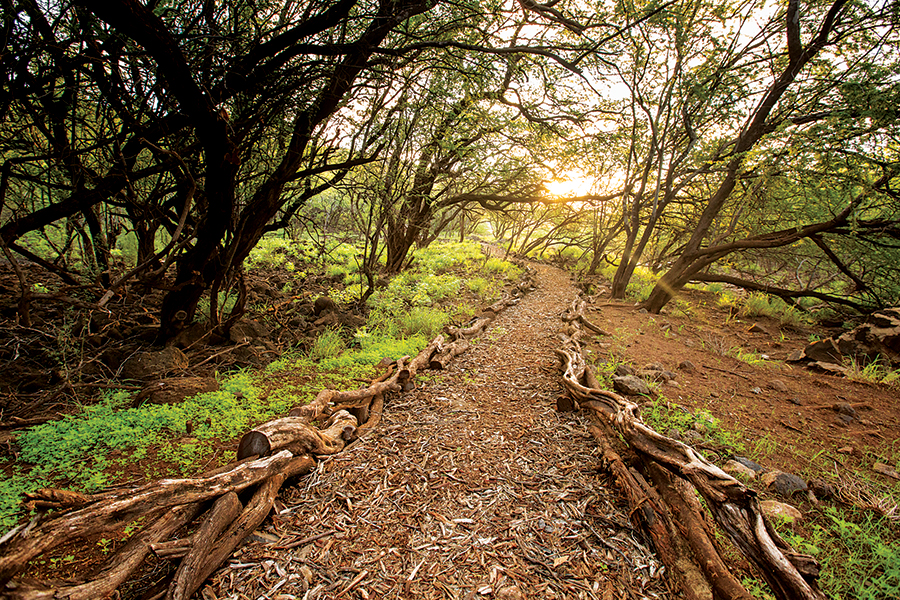 Kaupakuea Heiau Trail. “This is a recent path built to the heiau by the Pūlama cultural restoration crew. When Pulama gave Uncle Kepa money to look into cultural sites around the island, they found [Kaupakuea]. It was right behind a parking lot at the harbor for the [Maui-Lanai] ferry. Hundreds probably knew about it. But it wasn’t on the cultural radar until these guys found it.” 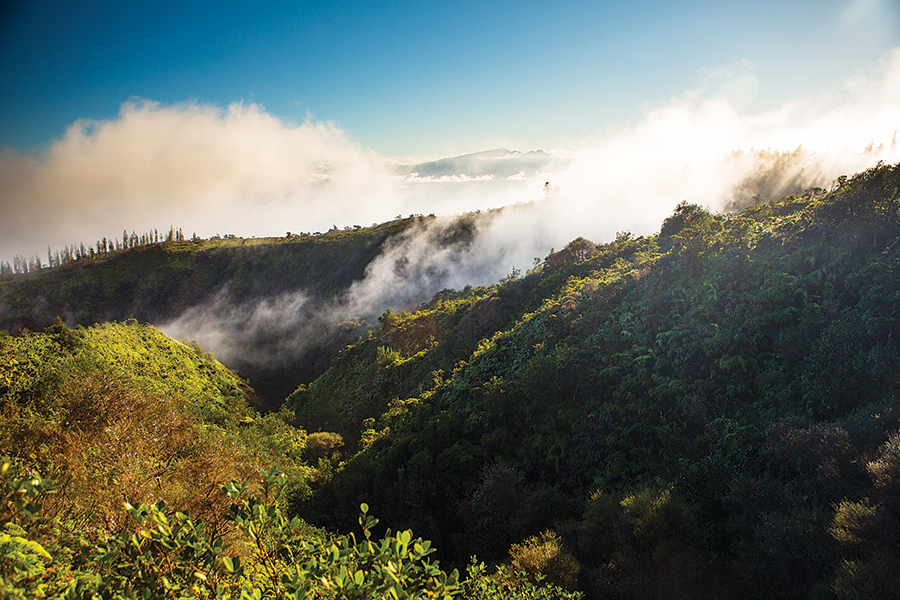 View from the top of Lanaihale on the Munro Trail. The West Maui Mountains, across the Auau Channel, are visible through the mist. 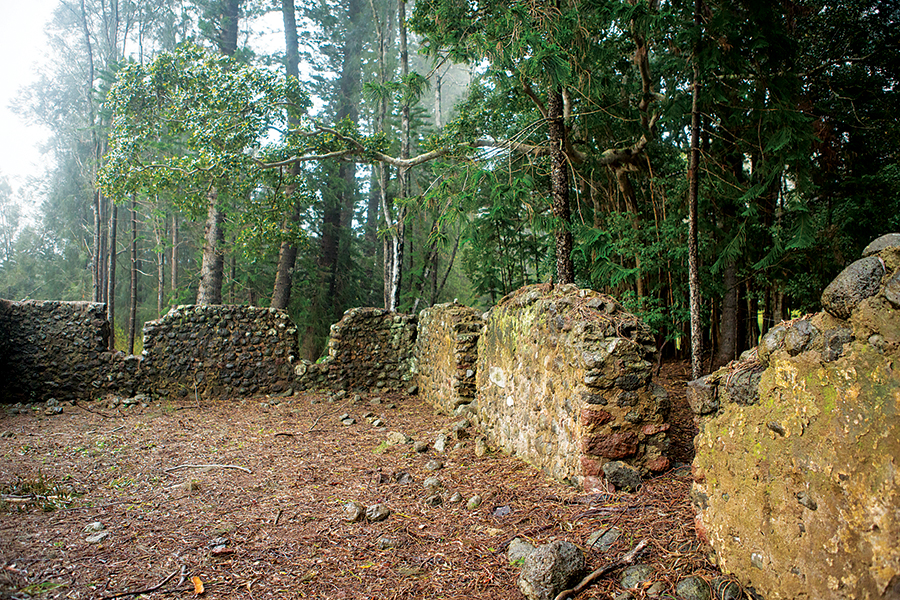 Ruins of a church and schoolhouse, constructed in 1846, above Lanai City. The ruins are alongside the nine-hole Cavendish Golf Course, built in 1947, which is still open to golfers. 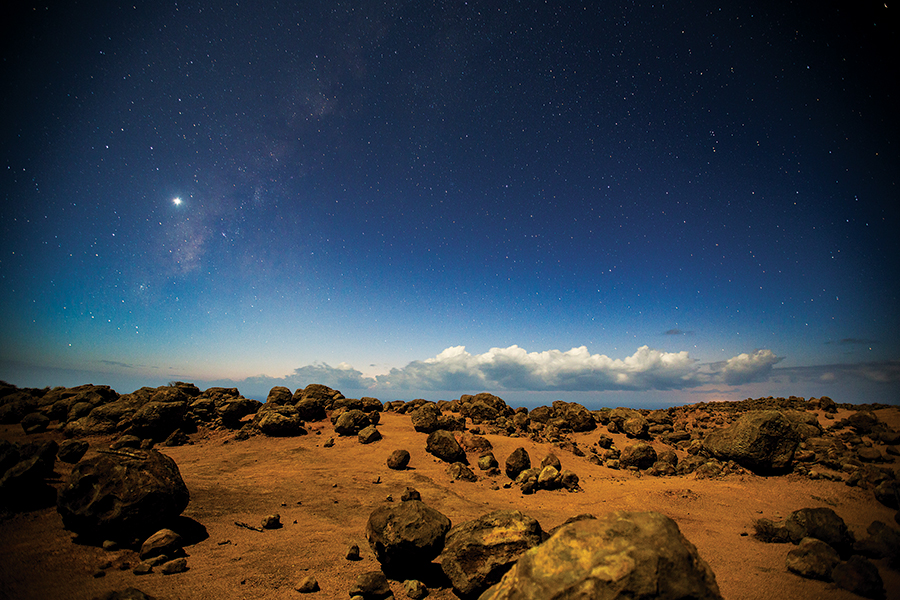 An evening view of Keahiakawelo, also known as “Garden of the Gods.” Former Lanai owner David Murdock had once slated a massive wind turbine project for land near this expanse of erosional rock formations and spires formed by centuries of wind carving. “Keahiakawelo is an awesome place for me. It’s windswept, barren and looks like a NASA photo from Mars. You always pass through it on the way out to Polihua [Beach] on the island’s north end. When the wind farm was in the works, I went here every time I was back on island to just wander around. It’s an amazing landscape. You really get a cool sense of how wind impacts the landscape. There are sweeping views [across] the channels here. And, if it’s clear at night, you can actually see Oahu. If the wind farm had been built, there’s no question that there would have been wind turbines all over this photo.”

Categories: In the Magazine, Lānaʻi