Expedition to Hawaii seamount Loihi seeks clues about creation of Earth, other worlds

Pele is on the move.

Hawaiian moolelo (legends) credit the fiery-tempered volcano goddess Pele with creating Hawaii’s myriad volcanoes, as she is said to have buried her sacred fire in each island until she finally found a permanent home in Kilauea caldera on Hawaii’s Big Island. But recently (or recently for an immortal goddess) Pele has been feeling out the Loihi seamount as a new deep-sea home.

Located 22 miles off the southeast Kau coast of the Big Island, Loihi is currently just an underwater volcano. Someday, the estimated 400,000 year-old seamount could become the ninth island in the Hawaiian chain. Don’t plan that Loihi vacation just yet, though. With scientists estimating that the budding island will likely take another 10,000 to 100,000 years to breach sea level, most of us would, like Pele, need to be immortal to visit.

For a few fortunate modern-day researchers, however, this is not the case. On June 25th, University of Hawaii at Manoa associate professor of Oceanography Brian Glazer led a team of researchers from the Oahu campus, the University of Minnesota, IFREMER Centre de Brest in France and the Woods Hole Oceanographic Institution (WHOI) in Massachusetts to study the largely unexplored depths of the Loihi seamount. Among the tasks of the 12-day expedition—which wraps up today (July 7)—were water sample collecting; exploring the seamount’s thick, iron-oxidizing microbacterial mats; and making a detailed map of Loihi’s deep, unexplored base.

A relatively young volcano, the submerged Loihi is akin to a window into Hawaii’s past, representing what the Islands looked like millions of years ago. Like Loihi, each of the Hawaiian Islands was created by a hotspot under the sea floor. There, magma erupted and hardened for millions of years, creating underwater volcanoes that eventually broke the ocean surface and became islands. Loihi was formed on the same hotspot as Mauna Loa and Kilauea, the two remaining active volcanoes of the Big Island. As a nod to Pele’s movement away from her Kilauea home, scientists have named one of the seamount’s craters Pele’s Pit.

Loihi is Hawaiian for “long” or “tall,” which suits the seamount—it was named for its long and narrow shape. Although it’s more than 10,000 feet high, even the tallest point on Loihi still remains more than 3,000 feet below the ocean’s surface. 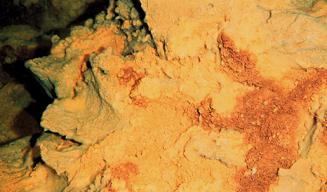 The fledgling island may never reach the surface, and certainly won’t in our lifetime. Despite this, Loihi’s very existence is a boon to researchers, who have done numerous expeditions to the seamount to learn more about the island-making process and the ocean around it.

The iron-oxidizing bacteria could play a key role in balancing the ocean’s chemistry. For deep-sea dwelling and upper-ocean organisms alike, iron is essential for growth. This is especially true for tiny organisms like phytoplankton, which form the base of marine food webs. Thus, learning more about Loihi’s “Iron City” could provide key insight to how Earth’s oceans are balanced.

“Iron City” can also tell us more about Earth itself—and the possibility of life beyond our little blue planet. Because the iron-eating bacteria leave traces of their existence in the form of rust in rocks on the ocean floor, it may be possible to determine whether other geological features are created in a similar way. If researchers accomplish this, they could use this formula to determine how other, still-unexplained Earth features developed. On a universal note, this could potentially give researchers a much simpler way to search for life on other planets.

To accomplish all of these goals, Glazer’s research team planned to utilize WHOI’s Sentry, an autonomous underwater vehicle equipped with a high-resolution camera, sonar systems, and chemical systems. Sentry was expected to map 40 square kilometers around Loihi’s base—nearly 10 times more surface area than previously explored. Sentry was also set to collect water samples that could reveal how iron and other chemicals cycle around Loihi, and how many of those chemicals contribute to the ocean environment.