You ask.  We answer.

In the early part of the ’90s, I went to see a dinner show at the Maui Tropical Plantation starring Buddy Fo. It was the most fun show I have ever been to. We went every time we were on Maui. When we came back and the show was no longer going, I only got blank stares when I asked about Buddy. I hope you can find some information. Is he still going strong and entertaining people?

At 75, Buddy Fo is still going strong.  We just talked to him on the phone.  He sounds great, and he and wife Sammi perform Monday nights at the Fairmont Orchid on the Big Island.

Fo was tickled that you remember his Hawaiian cowboy show at the Maui Tropical Plantation, Dorci. It was just one step in a legendary career.

After World War II, Fo put together the Invitations, the first Hawaii vocal group to land a national recording contract. Their Liberty Records album, RSVP, was named by HONOLULU Magazine as 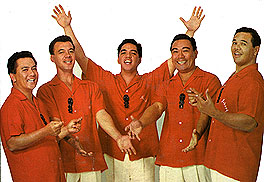 one of the 50 Greatest Hawaii Music Albums.  Unfortunately, it’s no longer available. Here’s what they looked like, in red shirts and white pants they bought from Liberty House.

After the Maui shows, Fo retired—only to be dragged out of retirement by his friend Don Ho. Fo’s memories of playing with Don are captured in the new biography, Don Ho: My Music, My Life.