Scan the rugged, leafy hills that are the backbone of Kauai’s east side on the drive between Wailua and Kapaa towns, and it doesn’t take long to make out the profile of Nounou Mountain. More famously known as “Sleeping Giant,” its emerald ridgeline resembles a human figure reclining on his back, chest held high and chin jutting toward the sky.

Hawaiian folklore varies as to why the colossus never so much as blinks an eye. In one story, he is a beloved builder of heiau (temples), with fields of kalo (taro) planted in his footsteps, who, after eating too heartily at a lū‘au held in his honor, slips into a deep sleep. In another tale, the big guy is something of a pest, his slumber foisted on him by fishermen who trick him into eating snooze-inducing rocks tucked into super-size servings of fish and poi.

Standing at the base of Nounou on a sunny spring day, gazing at the giant, however, I’m opting to think of him as a kindhearted gent who wouldn’t mind my hiking companion and me ascending almost 1,000 feet along the Nounou-East trail, which levels out at his chest.

On an island known for its multitude of breathtaking nature trails, many of them lengthy and challenging daylong adventures, the Nounou-East trail may be one of Kauai’s most popular for its brevity and location. At just two-miles long, the trail’s vistas are accessed quickly, allowing visitors to easily fit a few hours of pleasant hiking into their schedules. Additionally, its trailhead is less than 10 miles from Lihue Airport.

Nounou-East is one of 34 trails and roads on Kauai administered by Na Ala Hele, Hawai‘i’s statewide trail and access system. If you’re looking to reap dazzling scenic rewards for taking on a difficult hike, the Nounou-East trail is hardly in the same league as the plunging sea cliffs and deserted white sand beaches of the Na Ala Hele system’s 11-mile Kalalau Trail on Kauai’s majestic Napali Coast. However, by this morning’s end, I find Nounou’s payoff wonderful just the same.

The Sleeping Giant trail begins with a soft-on-the-feet path zigzagging through stretches of fragrant ironwood pines and guava trees. Less than a half-mile into the hike, my companion has already stopped several times to photograph stunning views of Nounou Forest Reserve mauka (inland) and Wailua Bay makai (seaward). Instead of finding contentment strolling casually and enjoying the foliage shimmering in light tradewinds, I’m itching to pick up the pace. I can’t help it.

A marathon runner who sometimes enjoys the dare of a trail run, I find the fun-to-navigate uphill trail too perfect to pass up. I drift ahead. But my faster pace soon slows as I encounter a brittle, if brief, lava-rock outcropping.

My photographer friend turns down my offer to hold his gear while he ascends the rocks. (I suspect some worry on his part. Given my impulse for impromptu running, I might jog away still clutching his camera.) When we’re both on level ground again, he smiles and gives me the OK to dart ahead. We will meet up next at the giant’s chest.

Approaching the trail’s halfway point, I stop to take in some new views: reddish details in the outline of the giant’s massive head. I want to leave the path for a closer look, but a cliff-hazard sign warns that overhanging ground could break off  under the weight of a hiker. For now, I keep my feet firmly planted on the trail. 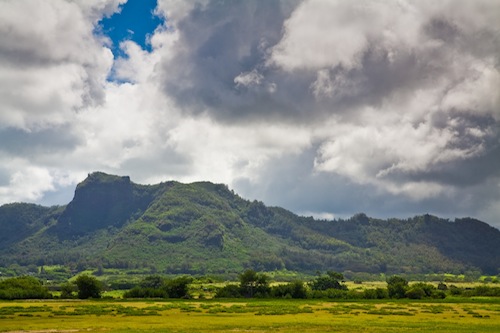 Can you see the reclining figure of the sleeping giant? Hint: It’s head is on the left side of the photo. Photo: David Croxford.

A quarter-mile below the giant’s chest, I pass through a thicket of hala (pandanus) trees stitched together by aerial roots. My solitude is interrupted by the chatter of hikers at a nearby trail junction. I follow their sounds to a grassy patch with sheltered picnic tables—the giant’s chest.

Here, I find sweeping views of the  Pacific, the mouth of the Wailua River and cloud-veiled Wai‘ale‘ale, Kauai’s dominant mountain, which, with annual  rainfall of more than 452 inches, is also one of the wettest places on the planet.

The other hikers continue on another trail, which descends the giant’s neck  before rising to his head. My photo-snapping friend and I decide to push on, too, finding the path well worn and fairly easy to follow. Even so, trail-running is not an option for me here, as there are narrow sections with scary-steep drop-offs near either side.
Also, both under and above the giant’s chin, I encounter a dozen or so yards of mild rock-climbing. Sound a bit dicey? It kind of is.

As it turns out, the state trail officially ends at the giant’s chest and Na Ala Hele  advises against continuing on. My companion and I did not know this. The other hikers also appeared to be unaware of the  advisory, which is posted on the Na Ala Hele website. If there was an advisory sign at the giant’s chest, I didn’t see it. 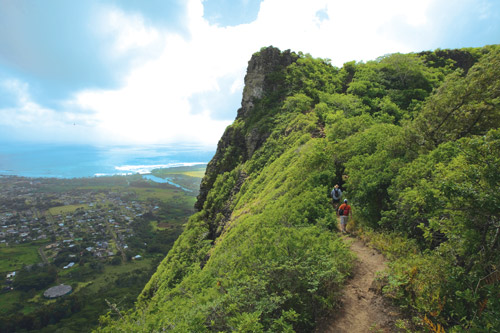 So, on this ideal day for outdoorsy  pursuits, we blithely follow one another to a tree-studded plateau at the end of the add-on path—essentially, the giant’s forehead.

I’m a bit surprised to see my gear- lugging companion excitedly scrambling up the last rocky haul, working hard to steady himself and his camera bag. Then it occurs to me: He can’t help it.

If I find it difficult to resist the itch to jog on a path well suited for trail running, how can a professional photographer like my friend pass up the chance to take in a picture-perfect 360-degree view of Kauai’s eastern coastline?

A giant impossibility, I think.

Watch This Trippy Hawaii Travelogue from 50 Years Ago

How to Make Hawaii-Style Huli-Huli Chicken

Admire the View from These Live Hawaii Webcams

Check Out Our Past Issues