Got surf? Holding period under way for 2011 Vans Triple Crown of Surfing on Oahu

Even so, the official holding period for the 29th annual Vans Triple Crown of Surfing is under way. The 38-day, six-event professional surfing competition (three for men, three for women) is the surf world’s most prestigious annual contest. It’s also the final stop for surfing’s best on the 2011 Association of Surfing Professionals yearlong world tour.

Each Triple Crown event keeps an extended holding period, with competition happening only on days with big surf—in general, sustained wave heights of 15 feet or higher.

The first event of the series, the Reef Hawaiian Pro, is slated for Haleiwa’s Alii Beach Park. Organizers have called today and every day since Sat. Nov. 12 — the holding period start date — a “lay day” due to small surf at Haleiwa. While yesterday’s waves were rated as solid along the North Shore, out of a northeast direction, Haleiwa requires swell from a northwest direction. 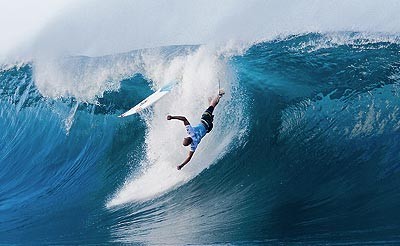 If you’re on Oahu over the next month, Triple Crown competition is worth the drive to the North Shore—especially when surf is seriously big. Click here to check on surf conditions and the status of events. All events run from 7:30 a.m. to 4 p.m. Expect thousands of surf fans and media on big-wave days.

Triple Crown pros have to compete in all three events in their respective gender categories, with each event crowning an individual champion. The male and female surfer who gains the most points over all three of their events wins the Vans Triple Crown of Surfing overall championship.

Surfline.com, official forecasters for the $830,000 Vans Triple Crown of Surfing, is predicting small to moderate pulses of northwest swells for Haleiwa during this week. The Reef Hawaiian Pro requires four days of competition during a 12-day holding period to crown a champion.