Gwen Stefani, No Doubt and families relax in Hawaii

Recording on the Big Island of Hawaii or just taking a vacation?

Gwen Stefani and her No Doubt bandmates bassist Tony Kanal and guitarist Tom Dumont were snapped with their families on Thursday enjoying a makeshift Slip ‘N Slide on a Big Island beach.

The rock band had reportedly been on the island most of the week. 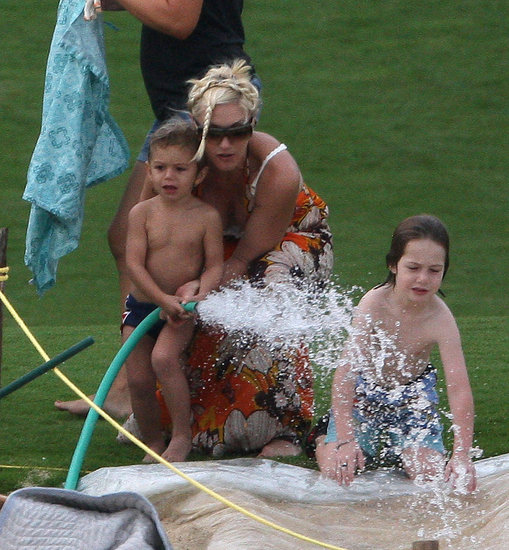 Perhaps opting to keep her usual designer duds back in Los Angeles with her husband, rocker Gavin Rossdale and two-month-old son Zuma, Stefani threw on a loose casual orange tropical print dress and hit the beach with her firstborn son Kingston, 2. (That’s mom and son holding the water hose, right.)

The rest of her No Doubt bandmates—sans drummer Adrian Young—soon joined the fun with their families.

The band’s still-untitled sixth studio album—its first together in seven years—is rumored for an early 2009 release.