If you’ve spent any of your Hawaii time on Oahu in the last four decades, either as a resident or visitor, chances are good you’ve also spent some of that time on TheBus. Fact is, TheBus has become such an omnipresent, reliable and necessary part of life on Oahu, it’s actually hard to believe the service is only 40 years old.

The first fleet in the city’s TheBus program took to the streets of Honolulu on March 1, 1971, under then-mayor Frank Fasi. Since then, the familiar yellow, orange and rainbow-striped bus fleet has grown to provide more than 75 million rides to residents and visitors every year, pretty much across the entire island of Oahu.

TheBus has been recognized twice by the American Public Transportation Association as “America’s Best Transit System,” in 1994-1995 and 2000-2001. It remains the only mass transit system to win the recognition twice..

There are currently 531 buses in TheBus fleet, with 11 percent of them fuel-electric hybrids. Every one of them has a bike bike rack.

With one-way adult fares at $2.50 (allowing one free transfer for each paid cash fare) and discounts for seniors, military and children, TheBus is one of the most affordable ways to get around Oahu. Visitors can also get a four-day bus pass for $25.

You can literally navigate around the entire island on a Honolulu city bus—which travel to all of Oahu’s major shopping malls, museums, restaurants, beaches and nearly every attraction on the island. 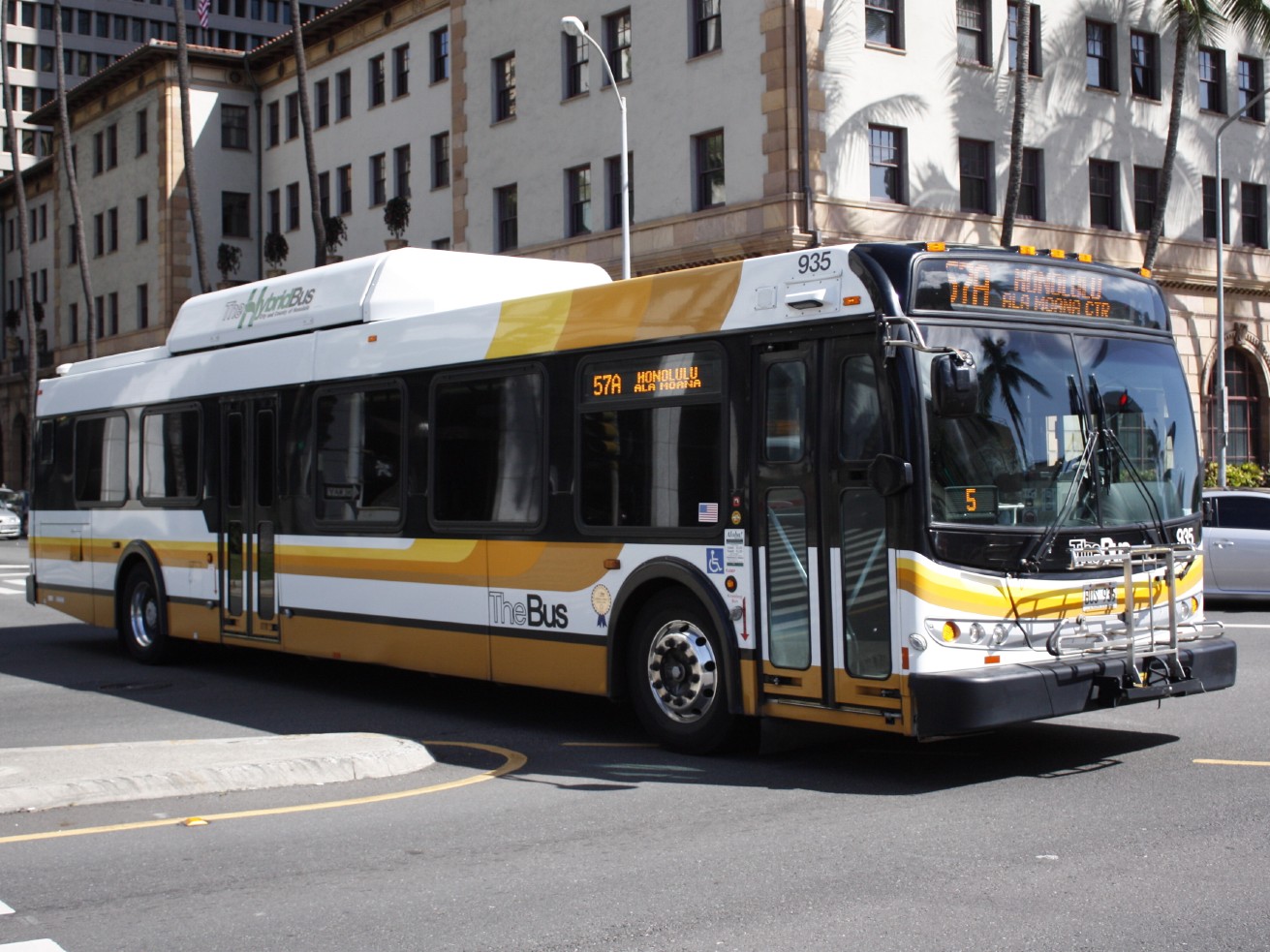 Our pick for best ride for first-time Oahu visitors, though? Definitelty, TheBus Circle Island route, which offers a scenic ride around Oahu via the North Shore and windward coast.

Here’s how to get on board:

• The No. 52 will travel west, passing through downtown Honolulu, central Oahu’s farming community of Wahiawa and into historic Haleiwa town on Oahu’s North Shore. It then passes the area’s world-famous beaches such as Waimea Bay, Pupukea (where the Banzai Pipeline is) and Sunset Beach before making a pit stop at the Turtle Bay Resort near Kahuku. The bus continues south on Kamehameha Highway—which hugs the shoreline of the windward coast—through Laie, Hauula, Kaaawa and Kualoa Park before reaching the residential town of Kaneohe. The ride continues through the Pali Highway Tunnels and back to Ala Moana Center in Honolulu.

• The No. 55 takes the same route but in the opposite direction.

• Approximate travel time for both routes is about four to five hours, depending on the traffic.

Neither route will take you through Oahu’s southeast coast—past Hawaii Kai, Sandy Beach, Makapuu, Waimanalo and Kailua— or the leeward coast—past Kapolei, Ko Olina, Nanakuli, Waianae and Makaha. But there are other TheBus routes that do.

Just visit to TheBus website, and enter your starting point and destination in the site’s transit search engine, and you’ll be on your away around Oahu in no time.