There are countless pieces of information about Hawaii’s geology that residents hold as fact. Three of these are:

• We are the only state in the union made up entirely of islands.

• Our northwest-drifting Islands were formed entirely by a single magma hotspot, now located beneath the southern half of Hawaii Island and still feeding the growth of the island.

• We have the largest volcano on the planet: Mauna Loa—covering 2,035 square miles of land area (more than half of Hawaii Island’s above-ocean lands) and possessing a maximum width of 75 miles.

Turns out, we may have to scratch one of these out of the science textbooks.

The science journal Nature Geoscience reports that a recently discovered Pacific Ocean submerged supervolcano called Tamu Massif, located about 1,000 miles east of Japan, surpasses shield volcano Mauna Loa in total size. The massive undersea volcano is believed to cover an area of more than 120,000 square miles—about the size of New Mexico or the British Isles—and have a maximum width of 400 miles. 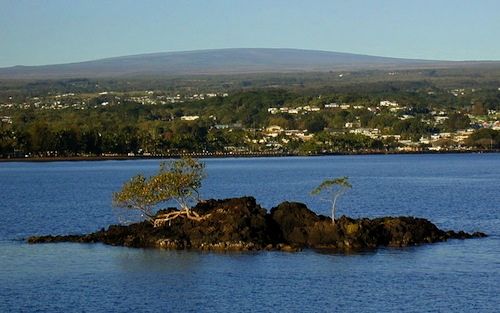 To put Tamu Massif’s, uh, massiveness into perspective, the volcano’s enormous rounded dome is only 25 percent smaller than Mars’ Olympus Mons, the largest volcano in our solar system. The name “Tamu” is an acronym for Texas A&M University, the institution where William Sager, geology professor and lead author of a study that revealed the volcano’s existence, began his research two decades ago. “Massif” is French for “massive” and a science term describing a large mountain.

Tamu Massif’s summit is about 6,500 feet below the ocean’s surface. Its base, four miles below sea level is part of an oceanic plateau called the Shatsky Rise in the northwest Pacific Ocean.

Hawaii residents can take comfort in one geological fact about Mauna Loa that remains true despite Tamu Massif’s discovery: It is still the largest active volcano on Earth.

Tamu Massif erupted for a few million years during Earth’s late Jurassic to early Cretaceous period—about 144 million years ago—and has been extinct ever since. Mauna Loa last erupted in 1984, but is still considered very much active and long overdue for another eruption.

Measured from its base on the Pacific Ocean floor, Mauna Loa is also the tallest active volcano on Earth, rising to 30,085 feet and making it even loftier than Mount Everest.