Hawaii’s celebration of the King Kamehameha Day holiday will get under way today — and wrap up next weekend — with ceremonies, parades and other cultural celebrations paying tribute to King Kamehameha the Great, who established the Kingdom of Hawaii in 1810 and was its first monarch.

King Kamehameha Day festivities start today (June 7) on Oahu. The Big Island’s celebration starts on Monday (June 10). And on Maui and Kauai, events are slated for next Saturday, June 15.

The largest celebration will be staged in Honolulu. Festivities will begin at 3:30 p.m. today when the King Kamehameha I statue, on King Street and across from Iolani Palace in downtown Honolulu’s historic Capitol District, undergoes its annual lei-draping. Volunteers will string fresh 25-foot flower and maile lei for the statue. Lei will be draped by way of cherry picker (pictured, above) over the king’s outstretched arms.

The 97th annual King Kamehameha Celebration Floral Parade — complete with its flower-studded floats, high school marching bands, pau riders, hula dancers, musicians and marching units — will wind through the Waikiki area, starting at 9 a.m. on Saturday (June 9).  The parade route will begin at the corner of King and Richards streets in downtown Honolulu and end at Kapiolani Park. Hoolaulea (celebration) events will follow in the downtown area. For additional information, click here.

Here’s a list of King Kamehameha Day events in the works elsewhere in the Islands. 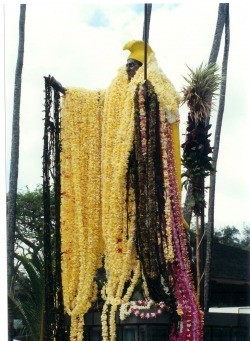 • June 15 — King Kamehameha Floral Parade in Lihue. The parade will start at Vidinha Stadium at 9 a.m. and end at the County Building on Rice Street. Hoolaulea to follow.

These Gourmet Caramel Apples are a Must-Try on Maui