Although the eruption has been relatively quiet during the past year, with mostly steady but unusually weak activity, over the span of three decades it has some produced dramatic lava flows.
Hawaii Volcanoes National Park is marking the anniversary with an After Dark in the Park talk, set for Tues., Jan. 7 at the park’s Kilauea Visitor Center Auditorium. Tim Orr, a geologist at Hawaiian Volcano Observatory, will review highlights from the past 30 years and talk about recent developments on Kilauea’s East Rift Zone.

The Pu u Oo eruption ranks among the longest-lasting Hawaiian eruptions in recorded history. The first written accounts of eruptions in Hawaii date back to the 1820s, when American missionaries arrived on the Big Island. 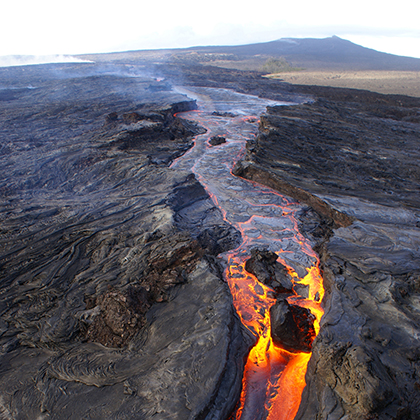 Throughout January — dubbed Volcano Awareness month — the free After Dark in the Park will present the following talks: “What’s Happening in Halemaumau Crater?,” “A Below-the-Scenes Look at Kilauea Volcano’s ‘Plumbing’ System,” and “The Story Behind Monitoring Hawaiian Volcanoes: How HVO Gets the Data It Needs to Track Eruptions and Earthquakes.”  For more information about the talks, all of which will be given by Hawaiian Volcano Observatory scientists, click here.