In a news release issued last week, Mark Dunkerley, president and ceo of Honolulu-based Hawaiian Holdings, Inc. and its subsidiary Hawaiian Airlines, said: “The name Ohana perfectly captures the idea behind this service and the role it will play in our community. This new service has always been about making it easier for friends and families throughout the islands and from overseas to share time together.” 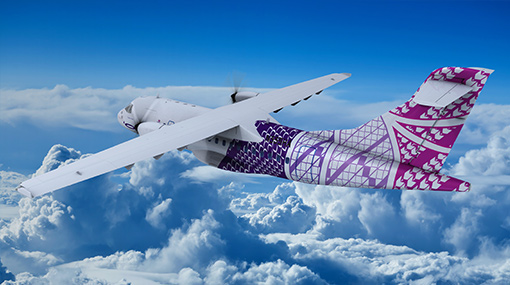 The father-son team reportedly used Hawaiian Airlines’ interisland route map as a basis for the design, and incorporated three kapa patterns: piko, representing ancestor and progeny; manu, representing both a bird in flight and the prow of a canoe, the traditional form of migration; and kalo, representing family.

In the release, Sig Zane said, “Today we invite our ancestors and kupuna to join us as we holoholo (excursion/travel) between the islands. We celebrate their art and recognize all who have traveled before us.” He added, “This symbol of our heritage is now a cherished piece for everyone to see.”

Ohana by Hawaiian flights will be operated out of gates 49 and 50 at Honolulu International Airport by contractor Empire Airlines. The new service will create up to 100 new Hawaii-based jobs in various areas of air transportation. Reservations and sales for the new operation will be handled by Hawaiian Airlines.