Hawaii officials are asking for lei donations — 50,000 strands are needed for our Memorial Day tradition of draping fresh lei at the gravesites of veterans at Oahu’s National Cemetery of the Pacific, in Punchbowl Crater, and at veterans cemeteries throughout the Islands.

Every year, Hawaii schoolchildren and community groups pitch in by stitching together thousands of lei, each made with fragrant plumeria, other flowers or ti leaves. On Sun., May 29, Hawaii Boy Scouts and other volunteers will walk through the cemetery in Punchbowl Crater, pausing at each gravesite to drape a lei, post a small American flag and salute the veteran.

If you’re in the downtown Honolulu area between 11 a.m. and 1 p.m. on May 27, stop by Honolulu Hale’s courtyard. There will be lei-sewing, music performed by the Royal Hawaiian Band, and hula — performed by Lei Day Queen Sandrina Lei Ilima Cabato De La Cruz.

The annual Mayor’s Memorial Day Ceremony is set for 8:30 a.m. on Memorial Day, May 30, at the National Cemetery of the Pacific.  There will be a posting of the 50 state flags, a traditional gun salute, performances by the Royal Hawaiian Band and Sounds of Aloha Choir, and a fighter jet “Missing Man” formation flyover conducted by the 120th Fighter Squadron, Detachment 1, Montana Air National Guard. 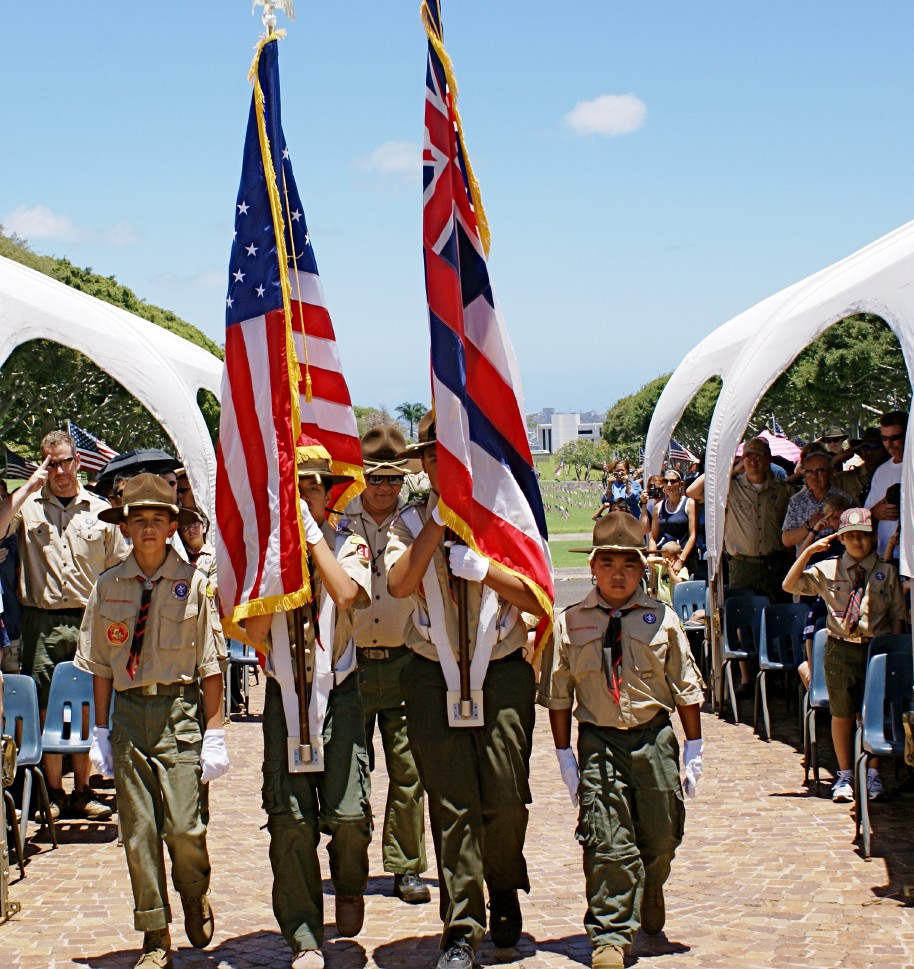 The National Cemetery of the Pacific, 2177 Puowaina Drive, is about a 15-minute car ride from the Wakiki area. The City and County of Honolulu will provide special bus service to the cemetery for the Memorial Day ceremony from the Punchbowl city bus stop on Route 15, Makiki/Pacific Heights, on Memorial Day. Free parking will be available at the Frank F. Fasi Municipal Building garage (near Honolulu Hale) for motorists boarding buses at the nearby Alapai Transit Center. Pick up at the transit center will be from 7 a.m. to 8 a.m.

According to a historical summary about the Punchbowl site, posted on the U.S. Department of Veterans Affairs website, Punchbowl Crater “was formed some 75,000 to 100,000 years ago during the Honolulu period of secondary volcanic activity. A crater resulted from the ejection of hot lava through cracks in the old coral reefs which, at the time, extended to the foot of the Koolau Mountain Range.”

The summary continues: “Although there are various translations of the Punchbowl’s Hawaiian name, ‘Puowaina,’ the most common is ‘Hill of Sacrifice.’”

For more details about the Hawaii and military history tied to the National Cemetery of the Pacific at Punchbowl, click here.

For additional information about the Mayor’s Memorial Day Ceremony, contact the Department of Parks and Recreation at 768-3002.  For bus information, call 848-5555 or click here.