The young crew members aboard the Hikianalia squint at the horizon, craning their bodies forward. The waves are small and choppy, the water a midnight blue as the hazy outline of coconut trees peeks over the waves.

“There! I totally see it!” one young woman shouts. She and her friend squeal with glee, screaming and jumping while older crew members shake hands and embrace.

That was the scene on June 15 as voyagers aboard the double-hulled Polynesian voyaging canoe Hokulea and its accompanying technical support canoe Hikianalia marked their first sighting of land—an atoll off the Tuamotu Archipelago called Arutua—since departing from Hilo on the Big Island of Hawaii on May 30. On June 16, the sister canoes docked at Rangiroa, French Polynesia.

Landfall after 16 days at sea is cause for celebration by any crew, but for those aboard the Hokulea and Hikianalia, the victory is even sweeter. Both crews used traditional Polynesian navigation practices to reach their destination. The more than 2,500-mile voyage to Rangiroa was the first leg of the Malama Honua Worldwide Voyage – the Polynesian Voyaging Society’s three-year, 47,000 mile worldwide journey. 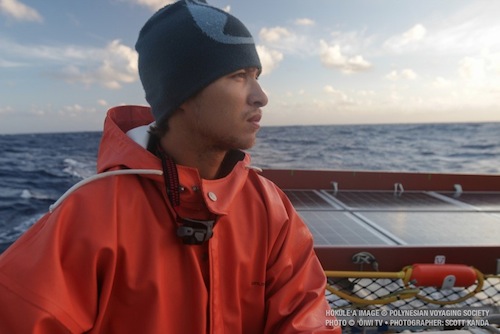 Crew aboard Hikianalia and Hokulea used the sun and the stars to navigate to Rangiroa. Photo: Oiwi TV/Scott Kanda

On its own, Hokulea has traveled more than 140,000 miles of the Pacific Ocean since its inaugural voyage more than 40 years ago—a trans-Pacific trek to Tahiti in 1976. The Malama Honua Worldwide Voyage is its first attempt to sail in other oceans. Malama Honua is Hawaiian for “caring for our earth.” The voyage’s goal focuses on fostering a global conversation about environmental sustainability.

In a blog post on hokulea.com, Hikianalia crew member David Komine wrote that the long journey is worth it because “a young new generation of future leaders and decision makers will understand the complex issues of caring for our Island Earth and take positive action to correct past mistakes.”

As the young crew learns these lessons from accompanying senior voyagers, so will the communities of the more than 25 countries where Hokulea and Hikianalia will make landfall over the three-year journey.

At Rangiroa this week, the community welcomed the crew with a large celebration, including lei, music, and dance. 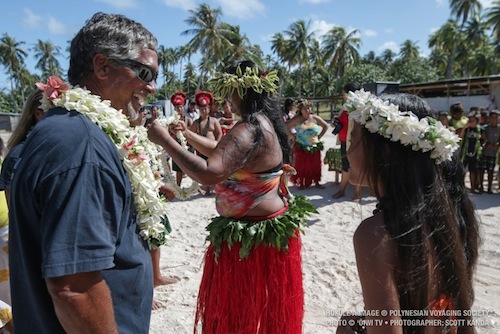 The next leg of Hokulea and Hikianalia’s journey will be a comparatively short 200-mile sail to Papeete, Tahiti. The canoes are set to leave Rangiroa tomorrow, June 21, and hope to arrive in Pepeete on June 22. Other destinations this year include Samoa, Tonga, and New Zealand. By 2017, the canoes will have reached far-off destinations including South Africa, Brazil, and New York City.