How hooponopono can bring people together

Like many Hawaiian or local students, I remember when I was first introduced to both the word and practice of hooponopono: It was the sixth grade by our teacher, Kumu Miki. Sensing a disruptive class morale due to a handful of students who weren’t getting along for days on end, kumu (teacher) spontaneously cleared our studies that morning and made the class of about 25 students sit in a circle facing each other on the floor. We were going to hooponopono.

The hooponopono is a Hawaiian family problem-solving process to restore harmony utilized throughout traditional Hawaiian society. It literally translates as “setting to right,” which Mary Kawena Pukui, the leading scholar and beacon on Hawaiian culture, further defines as, “to restore and maintain good relationships among family, and family and supernatural powers.” Its in-depth presentation exists in “Nana I Ke Kumu (Look to the Source): Volume 2,” a book on major Hawaiian culture concepts and insights by Catherine A. Lee, E.W. Haertig and Pukui.

The indigenous method has been experiencing a cultural revival since the mid-1990s and has permeated everyday local society. (No one bats a lash if Honolulu’s mayor says we need “to hooponopono and work towards finding a solution” when speaking to the press.) In a global sense, an argument can be made that it’s needed now more than ever.

There have been a number of successful case studies where locally based social workers and government agencies have and are applying the hooponopono practice, adapting it for modern settings from the corporate workplace to drug abuse treatment programs, as outlined in E. Victoria Shook’s research, “Hooponopono: Contemporary Uses of a Hawaiian Problem-Solving.” This largely intersects with areas within a Western culture, highlighting its cross-cultural efficacy. In the year 2000, kupuna (elder) Auntie Malia Craver was invited to speak to the United Nations about the hooponopono method as a means of peacemaking and its place in the world economy. 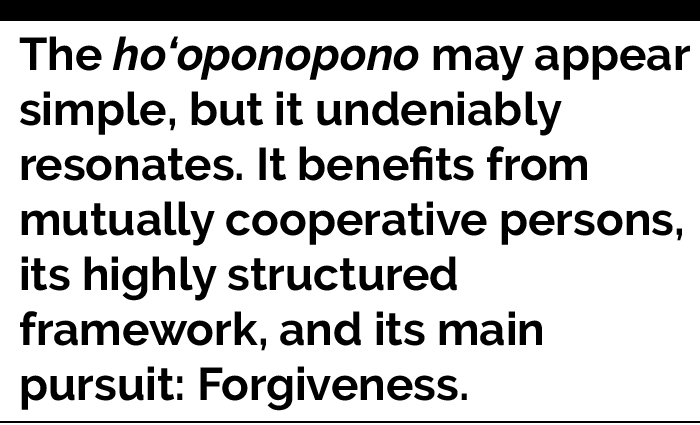 While the term itself wasn’t used by ancient Hawaiians, it is a remnant of a practice, led by kahuna (priests), that believed if someone fell ill it may have stemmed from breaking kapu (spiritual law) and only after admitting wrong and asking for atonement from the gods or from the violated person would the sufferer be physically healed.

The takeaway here is there has always been a persisting awareness by Hawaiians of how one’s mind—negative thoughts, confusion, anger and hostility—is interrelated with one’s physical health and well-being. Present day science in peer-reviewed journals consistently study and consistently affirm this notion.

It also suggests the significance Hawaii’s indigenous peoples placed on the benefits of dialogue and discussion. Talking is productive—a concept that overlaps into Hawaii’s own local culture, where “talking story” is far more involved and genuine than just the Western notion of “small talk.”

Forgiveness is always the main goal of the hooponopono. When asked about where the hooponopono fit into her personal upbringing in Hawaii, Pukui shared:

“I took part in hooponopono myself for 47 years, from semi-Christian to Christian times. And whether my ohana prayed to aumakua (ancestor gods) or to God, the whole idea of hooponopono was the same. Everyone of us searched his heart for hard feelings against one another. We forgave and were forgiven, thrashing out every grudge, peeve, or resentment among us.”

The hooponopono may appear simple, but it undeniably resonates. It benefits from mutually cooperative participants and its highly structured framework. Using the following distinct phases, as summarized by Shook, here’s how to perform a hooponopono in your own life.

How to hooponopono in 8 steps

The leading senior person conducting the hooponopono ensures the right climate is created for a successful session to take place. For some, this is a pule (prayer) to ask for assistance from a greater power or to offer a blessing that all participants can feel safe in being completely sincere and truthful throughout the process. This must be achieved in order to correctly proceed.

The kukulu kumuhana refers to the general problem that must be resolved. It also has other related meanings like “the pooling of strengths for a shared purpose” and the leader’s effort to reach out to a person who is resistant to the hooponopono process. This overall issue must be clear in order to solve its subsequent problems.

The hala, or the transgression, is explicitly stated. The word, hala, also implies that the perpetrator and the person wronged are bound together in a relationship called hihia, of negative entanglement.

Hihia recognizes that most problems have multiple layers, hurts, reactions and misunderstandings. It’s the leader’s kuleana (responsibility) as the intermediary to isolate each of these and work it through the next step until each are addressed.

The mahiki, or discussion phase, is a thorough unraveling of each problem identified. During this, the leader keeps individuals from directly confronting, talking over and not listening to one another. Hawaiians traditionally believed that allowing for escalating emotional responses discouraged problem resolution. Everyone is asked to share his or her feelings, even if they’re not directly related to the issue or relationship that inspired the session.

The emphasis of one’s manao—and this is a standout characteristic of the hooponopono—is self-scrutiny. It’s not about articulating blame, accusations and retribution; speakers are instead encouraged to self-interrogate and share openly and honestly their perspectives and state of mind with the group.

If tempers arise, the leader may declare a hoomalu, or a cooling-off period of silence, where everyone sits, reflects on the purpose of the hooponopono and reels in one’s emotions before continuing with the mahiki.

When all issues have been discussed and aired out, the mihi, a sincere confession of wrongdoings is expressed. Forgiveness is sought. It’s expected in the hooponopono protocol that when someone asks for forgiveness they be granted it. Terms of fair restitution are calmy arranged and agreed upon, if necessary.

Participants, specifically those bound in hihia, finalize the resolution process by mutually releasing the hala from their mind and lives.

7. The pani, or closing phase

During this phase, the leader summarizes what has occurred, what was discussed, and most importantly, reaffirms the strengths and empathy it took by the group to solve its conflicts. Once the problems have been kala, they are never brought up again. If there are still other dimensions of the hooponopono to be resolved, the final pani is postponed because sometimes these gatherings take multiple sessions. A pule hoopau (closing prayer) can take place.

Traditionally, the leader and participants will move onto sharing a snack or meal together. This is emblematic of the group continuing to share in a common experience and helps transition the mood from a formal problem-solving setting to a normal daily routine.