Hungry in Waimea? Here’s the all-locally-sourced Big Island burger you have to try.

Say you’re at the top of your profession as a Hawaii hotel chef. You’ve cooked at Waikiki’s famed Halekulani and done a stint in San Francisco during the food revolution of the ’80s.

At the Lodge at Koele on Lanai, you’ve won the “triple crown” from Zagat. That is, the guide rates your restaurant tops in Hawaii for ambiance, for service and for food.

What do you do next?

If you’re chef Edwin Goto, you open a hamburger stand. An almost microscopic eatery at the Parker Ranch Shopping Center on the Big Island.

“What do you think?” says Goto, who’s in an apron behind the counter when I arrive. “Sort of humble, isn’t it?”

Goto has spent his entire career staying humble. He can cook as well as anyone in the country. From Koele, I still remember his peppered loin of fresh venison and his three-color potato salad with salmon he smoked over pineapple bran. I still drool over the memory of his clear consommé with truffles and crab ravioli at Manele.

I once asked him why he didn’t become a celebrity chef. He claimed he couldn’t, that he was “a social idiot, a real backyard kind of guy.” He’d moved to the Big Island so he could spend his social time talking to ranchers and farmers. “They’re the most honest people in the world.”

Those talks resulted, apparently, in burgers. Goto (pictured, below) noticed that people could drive through Big Island ranching country, see cattle grazing, yet not be able to find Big Island beef, except perhaps as an occasional entrée on a high-end resort menu.

Goto’s Village Burgers serves up patties of pasture-raised Big Island beef, antibiotic  and hormone free, select cuts of which Goto personally grinds and hand-shapes daily. You can even get burgers made of Wagyu beef raised by Kahua Ranch, just 20 minutes up the mountain, and of difficult-to-find Hawaiian Red Veal. 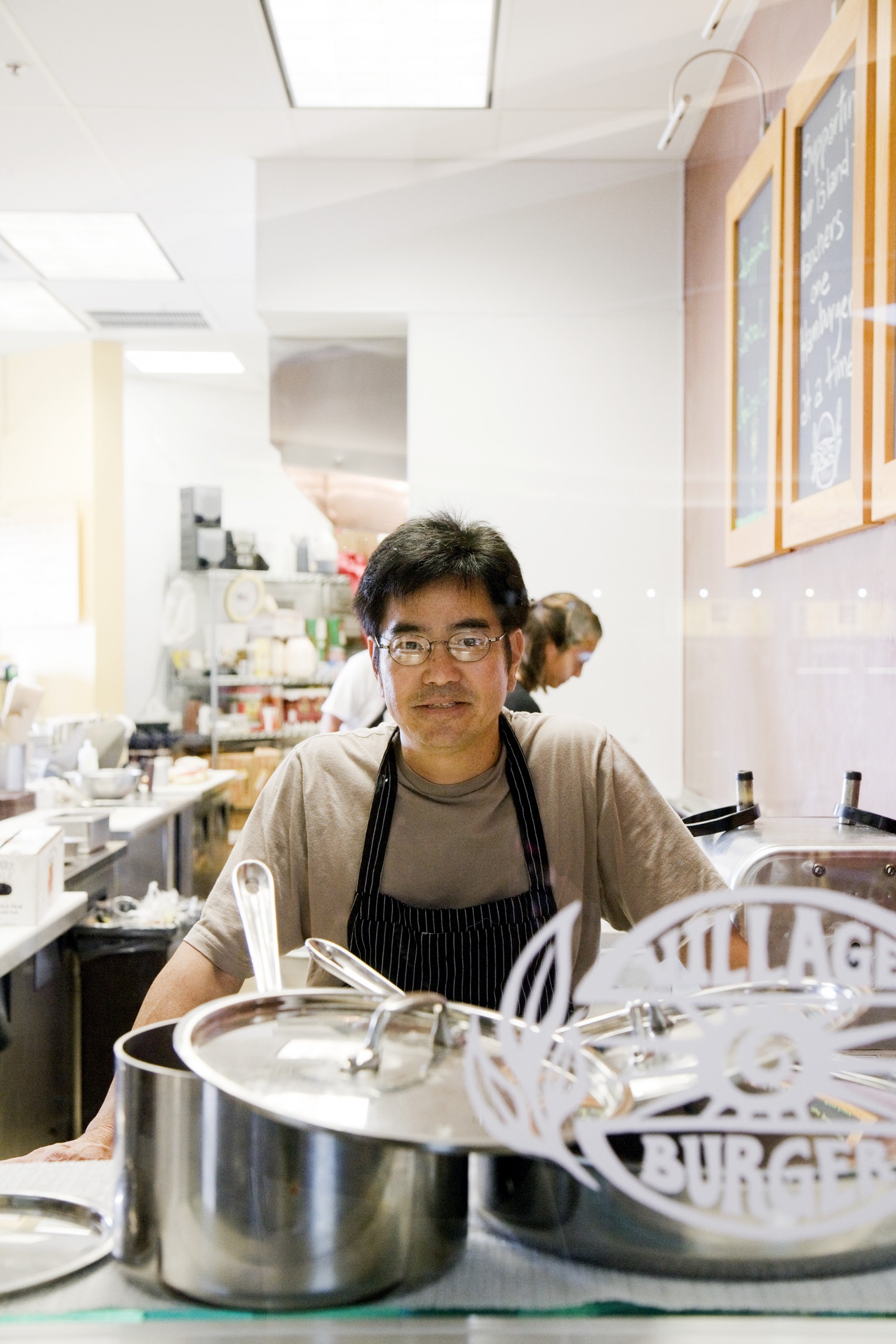 In addition, there’s an Asian-style ahi burger, Goto’s answer to the Filet-o-Fish sandwich. For vegetarians, there’s a patty made with Hamakua mushrooms, raised about a 40-minute drive away along the Big Island’s northern coast.

Most of the stuff you can get atop the burger—lettuce, tomato marmalade, avocado, goat cheese and Goto’s slow-cooked onions—is raised within a couple of miles of the restaurant. The buns are from Holy’s Bakery, founded in the nearby small town of Kapaau by a Japanese family called Hori. Nobody could pronounce their name, so they renamed the bakery Holy’s.

There’s nothing fancy about Goto’s burgers, served on wax paper.  There are only a few seats inside and outside the restaurant. Nothing fancy until you bite into a burger, and taste its rich, bright beef flavors, juicy, not greasy. Suddenly, all the talk about eating natural, locally sourced foods begins to make sense.

There’s not much else on the menu, though you wouldn’t want to skip the fries covered with what Goto calls, in an outburst of honesty, Parmesan Goop.

Just when I thought I was finished, Goto came over with cups in his hand. “Try these,” he said. Milkshakes with ice cream from Tropical Dreams, a creamery located all of a mile away. Big, thick, rich shakes. “People ask how I can charge $6 for a milkshake,” says Goto. “I’m not going to sell anyone a milkshake that doesn’t have a lot of real ice cream in it.”

He darts back behind the counter, where he hangs out 10 or 11 hours a day. “What’s it like running a tiny burger joint after supervising five major hotel kitchens?” I ask.

“You know, there’s one big difference,” he says. “At the end of day, I feel like I’ve really done something. I’ve made a lot of burgers, sold a lot of Big Island product and made some people happy.”

Drivers, Slow Down and Watch for Nēnē at Hawaiʻi Volcanoes National Park