Two of Hawaii’s most-enduring homegrown sports events happen this weekend: The Ironman World Triathlon Championship on Saturday and the Molokai Hoe on Sunday.

If you’re on the right island, you can watch at least one of them in-person.

Kailua-Kona, on the Big Island of Hawaii’s perpetually sunny west side, hosts the Ironman annually. The race—celebrating its 30th birthday this year—is the granddaddy of triathlons and the most world-renowned. It’s also one of the most grueling tests of the physical capabilities of the human body.

The all-day event starts with a 2.4 mile ocean swim in Kailua-Kona Bay, moves right into a 112-mile bike ride across the searing lava fields of the South Kohala coast to Hawi town and back to Kailua-Kona, and finally a 26.2 mile marathon back into the lava fields. It finishes back at the bayfront where it all started. (Click here for video.)

So prestigious is the Ironman among triathlons that its 1,800-plus participants have to qualify in other sanctioned international triathlons just to enter. If you’ve been in Kailua-Kona the last couple of weeks, you likely saw triathletes training alongside Queen Kaahumanu Highway for the Ironman’s running portion.

The first three competitions—which attracted at first only dozens of athletes, and weren’t even called Ironman—were held on Oahu. Once the event was moved to the more grueling Big Island course in 1981, word of mouth among triathletes boosted the Ironman’s legend and participant count to what it is today. So did this famous 1982 finish seen around the world. 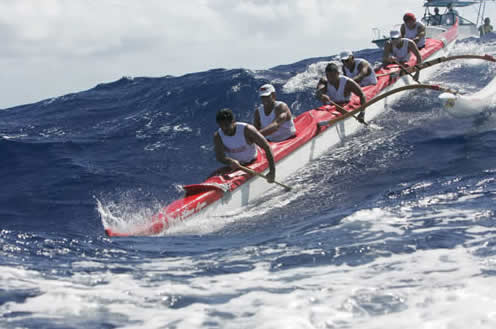 The Molokai Hoe canoe race is less renowned outside of Hawaii, but no less a monumental test of human endurance.

Each year, paddling teams from Hawaii and around the world—more than 1,000-plus participants in all—take their single-hulled canoes for a 41-mile open-ocean race from Molokai to Oahu. Doesn’t sound like much of a journey? You don’t know the Kaiwi Channel.

Even in good weather conditions, the channel separating Molokai and Oahu can be treacherous. Swells up to 10 feet sometimes swamp or capsize canoes. Tradewinds can be too light or too intense. Currents would gladly sweep the canoes far off course.

Strength—physical and mental—and teamwork are crucial just to finish what’s still considered one of the most tempestuous ocean races in the world. (Click here for video.)

If you’re on Molokai, you can watch the teams leave from Hale O Lono Harbor just after dawn on Sunday. By late morning, folks on Oahu’s south shore will start noticing the first canoes move past Hanauma Bay, Diamond Head and Waikiki before ending at Ft. DeRussy Beach next door to the Hilton Hawaiian Village.

In case you were wondering, the Hawaiian word hoe (pronounced “ho-eh,” without a glottal stop) means paddle, or the act of paddling.

For more information on events, start times and other minutiae, click here for the Ironman and here for the Molokai Hoe.