I’m at the Waikiki Shell for the first night of Kokua Festival 2008, standing in a line with about 150 people, trying to buy a $20 festival T-shirt.

The beer lines are far shorter, populated mainly by the boyfriends and husbands of the countless women in line with me. We’re missing Go Jimmy Go on stage. Tragic. But we boogie in place, inching our way towards the 100-percent-organic-cotton proof that we were here.

Hawaiian singer and ukulele player Paula Fuga goes on stage next. There’s no way I’m missing Paula. So I take a last sip of my husband Steve’s $7.75 beer, leave him in the T-shirt line, and try to find our seats—just five rows back from the stage.

Paula’s soulful lyrics and rich vocals set the late afternoon vibrating with melody. At the end of her set, I scream, “Hana hou!” (Hawaiian for “one more time”) at the top of my lungs. 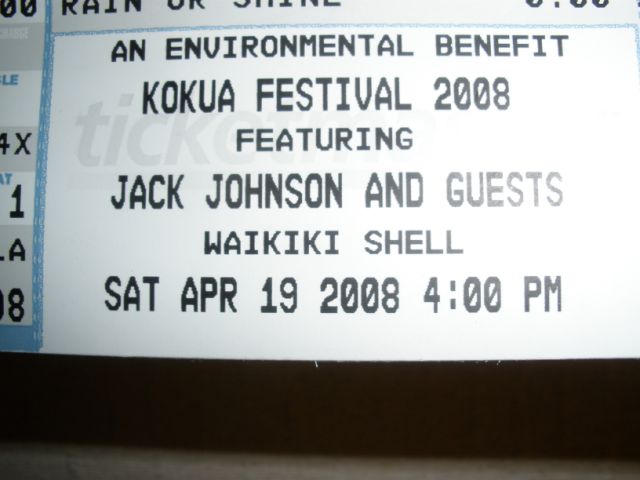 Steve, like Jack Johnson, is so far nowhere in sight.

When Dave Matthews walks out on stage, shrieking females rush back to their seats with full beers in one hand, veggie burritos in the other, purses bouncing off backsides.

The fans erupt in adulation when Dave opens with “Crazy.” Tim Reynolds—his longtime friend and fellow musician extraordinaire—joins him. Dave’s raucous vocals, contagious energy and the duo’s genius guitar riffs soon have everyone on their feet.

It’s Matthews’ first gig at the Waikiki Shell (and in Hawaii), and he’s obviously moved.

“Everything about this festival has a great vibe. It’s beautiful,” Matthews says solemnly to the masses, his normally sarcastic humor put aside.

The crowd erupts again, flashing shaka signs and cameras. Even guys previously content to politely move their heads from side-to-side while their women shake it, shout back, “Aloha Dave!” 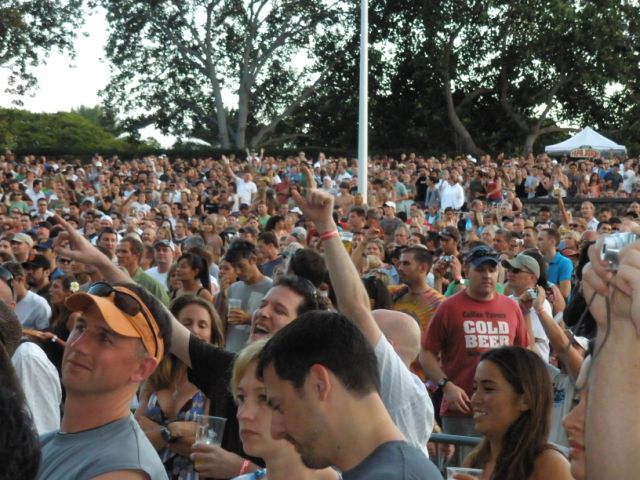 Steve finally shows up—two T-shirts in hand, with another full beer. It’s too loud to ask where he’s been. And when Jack takes the stage I’m so star-struck I just grab Steve and sing every word to every song— “Better Together,” “Banana Pancakes,” and all those Jack tunes Steve likens to chick flicks. Still, I catch him singing from time to time, too.

Jack’s set stretches into the night for a gloriously long time. He eventually calls his friends on stage: Dave, Tim, Go Jimmy Go, Mason Jennings. But first, Paula Fuga takes the mike again and she and Jack sing “Country Road”—my personal anthem to drive with both hands on the wheel, and keep an eye on the other guy.

At the end of the show, there are more shaka signs and waves of applause. Everyone takes some time to pick up discarded biodegradable plastic beer cups and trash, and put it in the appropriate receptacle on the way out.

Mahalo for your “Kokua,” Jack. See you next year!