If you ask us, it was only a matter of time before the Travel Channel’s gluttonous food travelogue Man v. Food made it to Hawaii.

Not that we consume food here the way Man v. Food host Adam Richman does. (For those not in the know, Richman likes his eats “in very large quantities.”) It’s just that Hawaii’s seemingly endless array of fantastic dishes, born of our multicultural population, seems a perfect match for a man with a bottomless appetite and a camera crew in tow.

Richman and the Man v. Food production team were on Oahu in June to film a “Honolulu” episode for the series’ second season. The hopefully tasty results of that visit will air Wednesday on the Travel Channel at 10 p.m. (Eastern and Pacific), 7 p.m. (Hawaii).

The gist of Man v. Food? It’s basically Richman traveling across America in search of restaurants that specialize in indulging serious appetites. Each episode focuses a single city. Richman soaks in a little bit of culture, but mostly digs in to exploring the city’s favorite local eateries—their specialty dishes, quality of ingredients, the restaurateurs and chefs who create the dishes. Each episode ends with Richman taking on a pre-existing restaurant food challenge during which, to put it bluntly, he gorges himself silly.

We were happy to hear that Richman sampled some tried-and-true Hawaii favorites at his first two Oahu Man v. Food stops. There was imu-cooked kalua pig, home-smoked pipi-kaula style short ribs and other luau standards at 50-plus-year-old Kalihi landmark eatery Helena’s Hawaiian Food (that’s Richman in the pic above, right side of the table, with sunglasses). On the Windward Coast, Richman stopped by Laie’s Hukilau Café for its famous “two-massive-hamburger-patties” take on the traditional loco moco.

His choice of Oahu food challenge, however, confounded us a bit: the MAC Daddy Pancake Challenge at Waikiki breakfast-all-day restaurant MAC 24-7. 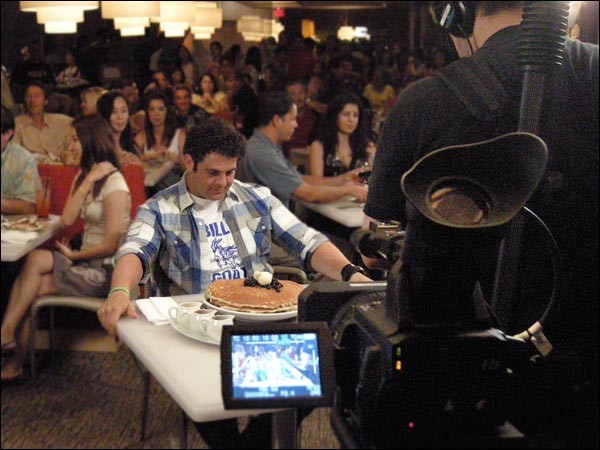 A pancake-eating challenge seemed to us like a contest Richman could take on in any city in America. His choice of pancakes confused us even more: blueberry pancakes, instead of the restaurant’s  more “tropical” banana and walnut, or pineapple, coconut and macadamia nut pancakes.

According to the video below, the blueberries in MAC 24-7’s pancakes were locally grown. We’re a bit skeptical about that since we couldn’t find a Hawaii farm that grew blueberries on anything but an experimental basis. But if he’s telling the truth, props to Richman here.

We’re guessing the rules and scope of the MAC Daddy Pancake Challenge are what intrigued Man v. Food producers most at this stop: Consume three pancakes, each measuring 14-inches-wide (!!), in 90 minutes without ever leaving the table. Finish, and your pancake order is free.

I’ve ordered MAC 24-7’s pancakes. Each is the size of an automobile hubcap. Seriously.

MAC 24-7’s Web site reports that only seven people have ever completed the challenge. One other interesting bit of trivia? The entire meal contains four pounds of flour!

Did Richman (pictured above, staring into blueberry abbondanza) beat the mammoth stack of carbs? Man v. Food producers aren’t saying, and neither are the folks at MAC 24-7, which is hosting a viewing party for the episode on Wednesday, from 5 to 7 p.m.

Us? We’ll be watching Travel Channel tomorrow along with everybody else … sans pancakes, we think.