These days the old Princeville Resort looks more like a construction site than a luxe-lodging establishment. The $40 million overhaul—which began last October—is part of the recent rebranding of the Kauai resort as the St. Regis Princeville Resort.

The revamped resort will be the only St. Regis property in Hawaii. The developers are trying to integrate the elegance of the high-end luxury chain with the resort’s island surroundings.

According to the resort’s Facebook page (yes, even luxury resorts have Facebook pages), the redesign is guided by the Hawaiian concept of ahupuaa—or what St. Regis is describing as “living in balance with nature.” (The word ahupuaa actually describes a Hawaiian land division system that extended from the ocean to the mountain. The bounty of that land, however, often depended on living in balance with nature.) Consequently, the resort will incorporate natural island elements of sea, sky and earth.

Four new restaurants will open, anchored by the first Jean-George Vongerichten restaurant in Hawaii. The eatery will place a strong emphasis on ingredients farmed or produced on Kauai. Vongerichten’s other restaurants include the well-received Perry St. and the Michelin-three star-recipient Jean-Georges in New York. 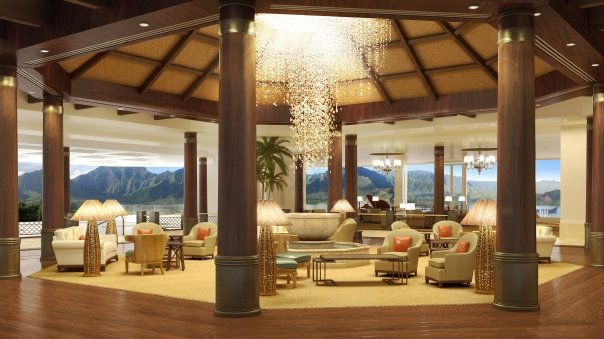 Among the other additions to the resort: several boutique shops and the 10,000-square foot Halele’a Spa offering a 24-hour fitness center and treatments that use indigenous fruit and flora.

To celebrate its debut, the resort is offering the Quintessential Princeville Experience. The deal includes your choice of complimentary activity for two with a five night minimum stay. Choose either two rounds of golf at the Prince Golf Course, an hour-long spa treatment at Halele’a Spa, an adventure package at Princeville Ranch or dinner at Makana Terrace restaurant.

The St. Regis Princeville Resort is set to debut September 19, with an official grand opening celebration scheduled for October 1.

Reservations are being taken for travel dates beginning at October 1. For more information, call (808) 826-9644 or click here.