If you’re still an expert at figuring out where Waldo is; love Hawaii’s gorgeous, green forests; and are looking for a better way to spend your online time than playing Candy Crush or scrolling through Facebook (except for our page, of course); the Hawaii Challenge may be right up your alley!

The Hawaii Nature Conservancy has teamed up with DigitalGlobe to save a swath of remote Kauai rainforest from two invasive plant species: the Australian Tree Fern and the African Tulip Tree. Both are weeds, which crowd out native plants and kill them by stealing sunlight.

Hawaii’s rainforests are home to multitudes of endemic plants and animals, many of which are endangered. Invasive species pose a serious threat to the health of remaining endemic plants and animals, since they increase competition for limited natural resources. Hawaii’s ecosystems are especially fragile: more than 60% of Hawaii’s native species are on the U.S. Endangered Species List. 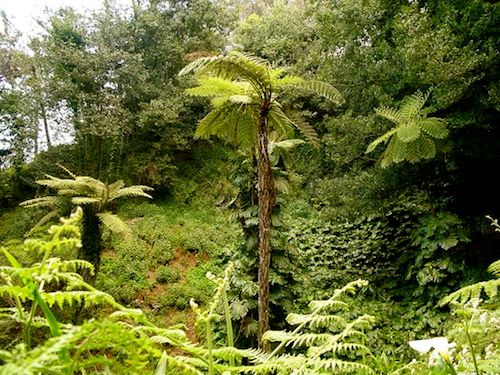 The decline of native organisms isn’t merely about losing endemic species. It also impacts Hawaiian culture, since residents sometimes use native plants for cultural practices. Additionally, rainforests are a crucial source of fresh water for Hawaii’s population, so when invasive species are allowed to thrive unchecked, everyone suffers.

Depressing, right? But don’t despair too much—thanks to a new web app, anyone can help preserve Hawaii’s rainforests without getting off the couch! The Hawaii Nature Conservancy’s Hawaii Challenge asks users to scour 3,000 acres of Kauai rainforest for these invasive plants, and tag them using high-res aerial photographs.

By participating in the Hawaii Challenge, volunteers (dubbed “couch conservationists”) can tag these invasive plant species by scrolling through a map. As users mark the invasive species on the map, Tomnod, DigitalGlobe’s crowdsourcing web app, aggregates the data and identifies tags with the most user agreement. The Hawaii Nature Conservancy then uses the data to pinpoint the location of the weeds, and eradicate them in the field using an herbicide-spraying helicopter called “The Stinger.” 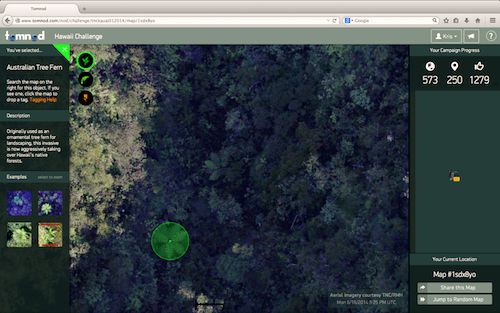 Lured by the search-and-destroy challenge (as a child, I owned several editions of the I Spy books) and the ability to make a positive impact on the environment (I was a Tree Hugger in high school), I decided to devote fifteen minutes of my life to the effort.

This quickly became at least an hour’s worth of tagging weeds. My goal of locating 50 invaders soon turned into a goal of 100, and before I knew it I had tagged over 200 Australian Tree Ferns. I was addicted. The Hawaii Challenge feels more like a game than volunteer work, and I found myself wanting to go back to it over and over.

The web app is pretty intuitive. Users are shown several photo examples of each invasive plant as training before they tackle the challenge. Take a good, long look at these images, but don’t dwell too long—if you forget what the weeds look like, a helpful sidebar on the left side of the map will bring back the example photos.

When the map loads, you see satellite images divided into rectangular tiles. These tiles break up the plant life into manageable blocks, so that you can move through the satellite images efficiently. The right sidebar gives progress statistics – total tiles seen, number of plants tagged, and a running tally of how many people agree with your tags. With each tag you are given confirmation on how many people agree with your invasive plant selections. You’re also offered a chance to change your mind if you have second thoughts.

The highest user agreement I received for a tag was 62. (Score!). But it’s normal to range in the 10s and 20s.  The map is huge – 3,000 acres of Kauai forestry – so there’s a lot of ground to cover. Another reason why it’s imperative to the success of the app that many people tag as many bad weeds as they can? The effort only targets weeds with a high number of tags. 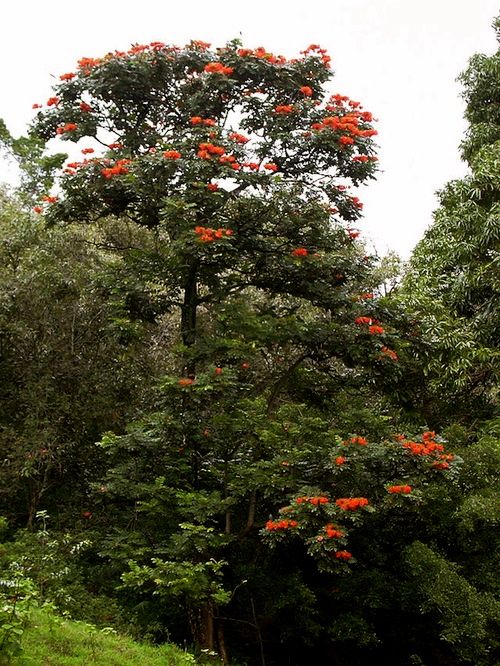 This weekend, I will probably spend another hour or two sprawled on the couch, television playing in the background as I tag weeds on my laptop. But I’m not just chasing the feeling of satisfaction I’ll get when I find the wispy tendrils of an Australian Tree Fern peeking through the forest, knowing I may be contributing to smacking it down. Although the Challenge feels game-like, the reward is ultimately more satisfying than any silly Facebook game: with every plant tagged, I’m giving back to the beautiful state that’s been my lifelong home.

The Hawaii Challenge went live on June 17 and will continue indefinitely. If the program proves successful, the Hawaii Nature Conservancy will use similar crowdsourcing for future conservation efforts.

Founded in 1951, The Nature Conservancy is a non-profit organization dedicated to diminishing environmental threats, and protecting and maintaining ecologically important environments worldwide. More than 35 countries – including every state in the U.S. – benefit from the Conservancy’s efforts. The Hawaii Nature Conservancy focuses on four major areas of conservation: protecting forests and watersheds, maintaining marine environments, halting climate change, and eliminating invasive species. They protect almost 200,000 acres of natural lands on six of our eight islands.