It’s midday on a Wednesday and my only task at the moment is to somehow put into words the almost surreal hue of clear blue water at which I’m gazing from my seat on a Zodiac raft in gentle waves off the Napali Coast.

When the raft slows down to allow us a closer look at an enormous pod of spinner dolphins swimming past us, I ask other passengers for adjectives. Someone offers: “How about cerulean? Or cobalt?”

Our captain, Chris Turner, a longtime waterman who has plied this awe-inspiring coast for many years, turns to us and smiles.

“Windex blue,” he says in a helpful, matter-of-fact manner.

He’s absolutely spot-on, too. Oddly, Windex blue really is the almost-unearthly color of the Nāpali Coast’s offshore waters beneath a cloud-dotted sky on this sunny June day. Peering over the edge of the raft, operated by outdoor adventure company Napali Riders, we watch as the curious dolphins cruise together, cautiously circling our vessel. A few yards away, dorsal fins surface and a lone dolphin leaps above the waves for a quick, showy spin. 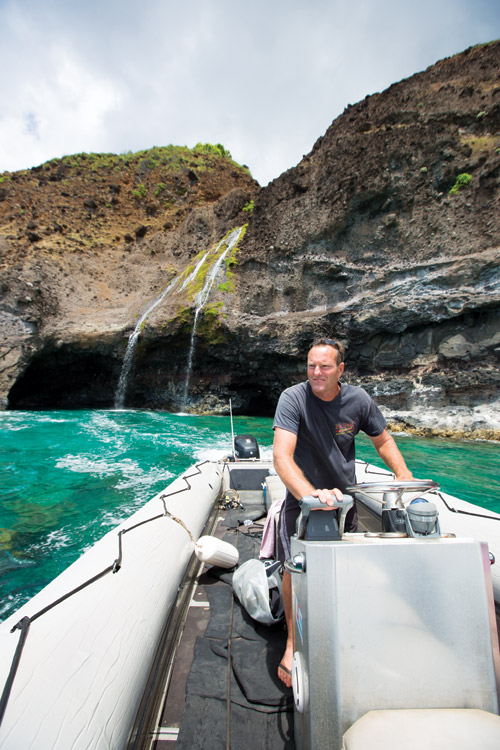 With its captivating views of boundless ocean, fluted sea cliffs rising up to 4,000 feet above sea level and seemingly infinite possibilities for exploration, the Napali Coast is a nature-lover’s nirvana. Ever-fascinated with the majestic north shore Kaua‘i coast, we’ve explored our fair share of it in HAWAII Magazine’s pages over the years—by land, on hiking trails winding around its peaks, sheer cliff faces and shoreline; and by air, via helicopter tour. Never, however, close up by sea.

I suggested it was high time we did.

And so, earlier in the morning, my camera-toting companion and I arrived at Napali Riders’ office in the westside town of Waimea encouraged by our first sight. Passengers returning from an “early bird” tour of the coast were happily checking out photos and video from their 4½-hour raft tour. My photographer friend quickly began packing his best gear in provided waterproof bags.

Turner and his crew warn passengers that there’s no guarantee all their belongings will stay dry on Napali Riders’ 30-foot adventure boat, dubbed “Seabiscuit,” as it bounces and bounds along the coastline. On a bright, beautiful morning like the one we encountered, however, my friend concluded the risk was worth a roll of the dice. Light easterly breezes from Kauai’s closest neighboring island, Ni‘ihau, were calming offshore waters, and early summer sunlight from the east was serving up crisp and clear views.

As our tour left Waimea’s Kikiaola Harbor and headed out to sea, we settled into our seats. Turner cranked up the Zodiac’s engine speed, courtesy of twin 250-horsepower outboards.

During our excursion from west side Waimea to north shore Haena and back that day, the raft’s quick bursts of acceleration caught passengers off-guard more than a few times. For me, a bit of fumbling to find a handhold while we zipped over a few thumping waves quickly became part of the fun. 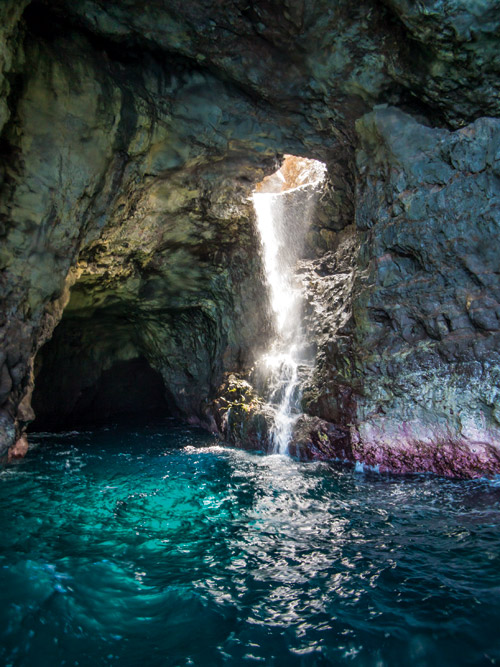 After our pause to visit with the dolphin pod, in waters just off Polihale Beach Park, on Napali’s westernmost end, our captain steers us toward a series of sea caves. The first is a hollowed-out, vertical lava tube called Open-Ceiling Cave, aptly named for its huge, nature-crafted skylight. As we float into its stone-cooled shade, Turner nods to the glow of the water.

Further down the coast, heading eastward, we glide into one of the world’s longest sea caves. Waiahuakua Sea Cave, also known as Double-Door Cave, is 1,155 feet long and horseshoe-shaped. As we enter through the cave’s “back door,” daylight disappears into a spooky blackness until the raft rounds a curve. From here, we spot a slim waterfall gushing through a hole in the cave’s ceiling.

“Look for the ghosts in the water. Our timing is just right,” Turner says with a hint of excitement.

When the afternoon summer sun sends bolts of light through the skylight-like hole, a sort-of spotlight is created. It’s then that calcium deposits rising to the water’s surface may appear, to those with active imaginations, like specters swirling about a tinted glass window. For a few minutes, I alternately watch for glimpses of phantoms below and gaze upward at the gleaming skylight waterfall and its shimmery sprays. 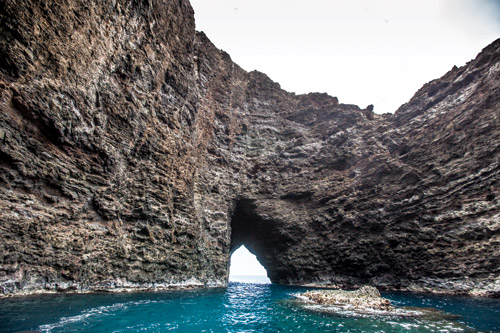 The ocean entrance and massive skylight of Open-Ceiling Cave.

As we continue along Napali, we watch kayaks and other small watercraft occasionally duck into rugged sea arches for a few minutes of cover and calm waters. All the while, we remain ever in awe of the breathtaking visual mosaic of still more towering waterfalls, lush valleys, secluded beaches and some of Hawai‘i’s most skyscraping sea cliffs.

Napali, which translates as “the cliffs” in Hawaiian, is believed to be about 5 million years old, a geological remnant of the volcanic eruptions and forces of nature that formed another of Kauai’s stunning natural wonders, Waimea Canyon. Wind, rain and crashing waves, over eons, slowly carved Napali’s famed, deeply-eroded slopes, valleys and accordionlike span of steep, sharp-edged ridges.

At our Haena turnaround point, we watch snorkelers explore the shoreline near Kee Beach, hikers at the start of the 11-mile, coast-winding Kalalau Trail and others enjoying the midafternoon good weather. The color of the water here? A sort of speckled azure, I surmise.

Ultimately, I elect not to ask the good captain.