Empty, cracked blue-green shells lie scattered about the incubator, while nine chicks huddle together, open-mouthed and squawking, during a feeding. The meal is one small step for the newly-hatched alala (Hawaiian crow) chicks, but one big leap for their species.

The nine alala chicks recently hatched at the Keauhou Bird Conservation Center on Hawaii Island, bringing the total alala population statewide and worldwide up to 114 birds. Alala have been extinct in the wild since 2002, but the species lives on in captivity thanks to the Hawaii Endangered Bird Conservation Program (HEBCP), a field program of the San Diego Zoo Institute for Conservation Research, in partnership with the State of Hawaii Division of Forestry and Wildlife and the U.S. Fish and Wildlife Service.

To better monitor the alala eggs, and to help any chicks that struggled to hatch, the staff kept the eggs in incubators rather than in a nest with their parents. Once the chicks hatched, some were raised by their parents, while others were raised by KBCC staff. Hidden by cloaks, staff used birdlike hand puppets to feed and interact with the chicks to prevent them from imprinting on humans, which could severely hinder their chances of thriving in the wild. Once their population is large enough, the Hawaii Endangered Bird Conservation Program hopes to reintroduce the alala raised in centers like KBCC to the wild.

Endemic to Hawaii Island upland forests, alala once lived in ohia koa and ohia forests, where it ate an omnivorous diet of native plants and fruits, insects, mice and the nestlings and eggs of small birds. Adult alala typically lay one to five eggs at a time, and family groups stick together until the chicks are able to fly and eat on their own. Their natural predator is the io (Hawaiian hawk), but chicks are also vulnerable to rats, cats, dogs and mongooses. 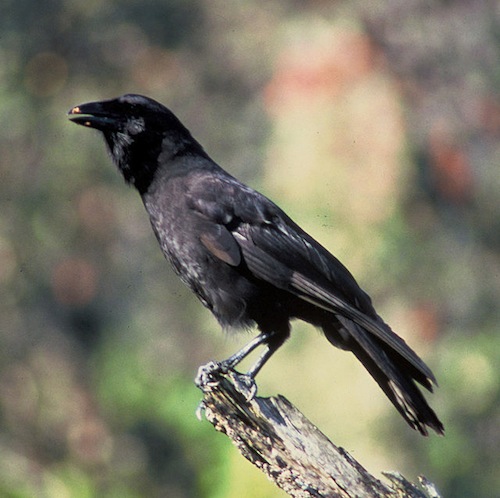 Native Hawaiians regard alala with special reverence. The birds are considered aumakua (ancestral deities) by some families. Alala were sacred to those families, providing them with protection and guidance. Thus, conservationists have cultural and environmental reasons to restore the alala population to a healthy size.

The alala have been on the federal endangered species list since 1967. In the 1890s, coffee and fruit farmers shot alala, decimating the population. Their population declined further due to mosquito-transmitted disease, predation by introduced animals like the mongoose, and loss of suitable habitat due to grazing and logging. By 1978, only 50 to 150 alala were left in the wild, and the last two alala disappeared from Hawaii Island forests in 2002.

Current alala conservation efforts are focused on steadily increasing population size. In the early 1990s, around the time that KBCC was built, there were only 20 alala left in the world. In 2011, KBCC raised a record-breaking 19 alala chicks, increasing the population to 95. There are currently 114 alala alive today, and thanks to entities like the San Diego Zoo and programs like HEBCP, their population will continue to grow.

Conservation efforts also focus on improving alala habitats for the birds’ eventual reintroduction to the wild. In 1997, the U.S. Fish and Wildlife Service received 5,300 acres of land in South Kona to create the Kona Forest Unit for the Hakalau Forest National Wildlife Refuge. The refuge contains alala habitat, and restoration efforts (such as controlling predator populations and increasing food sources) are ongoing. HEBCP and other conservation entities hope that the combination of a larger alala population and improved alala habitat will someday allow the endangered bird to thrive in the wild again.