No one in Hawaii knows what this ‘culture exam’ is exactly

This document has been floating around online for a few years, resurfacing most recently on Reddit, and it’s extremely fascinating. Especially to those with roots to the Islands given the highly distinct nature of its “exam questions” in relation to the state’s diverse population. In short: this modern-day artifact is too unique and specific to exist as-is anywhere outside Hawaii.

As it circulates online, the user who originally uploaded it to imgur stirred discussion with these images of a four-page, 30-question document titled “Cross-Cultural I.Q. Quiz,” captioning them: “I found a super old Hawaii culture exam given to students.” The person goes on to explain it was stumbled upon a few years back at a friend’s grandmother’s place and “apparently this is what they made students take to better understand one another,” or so the caption reads. 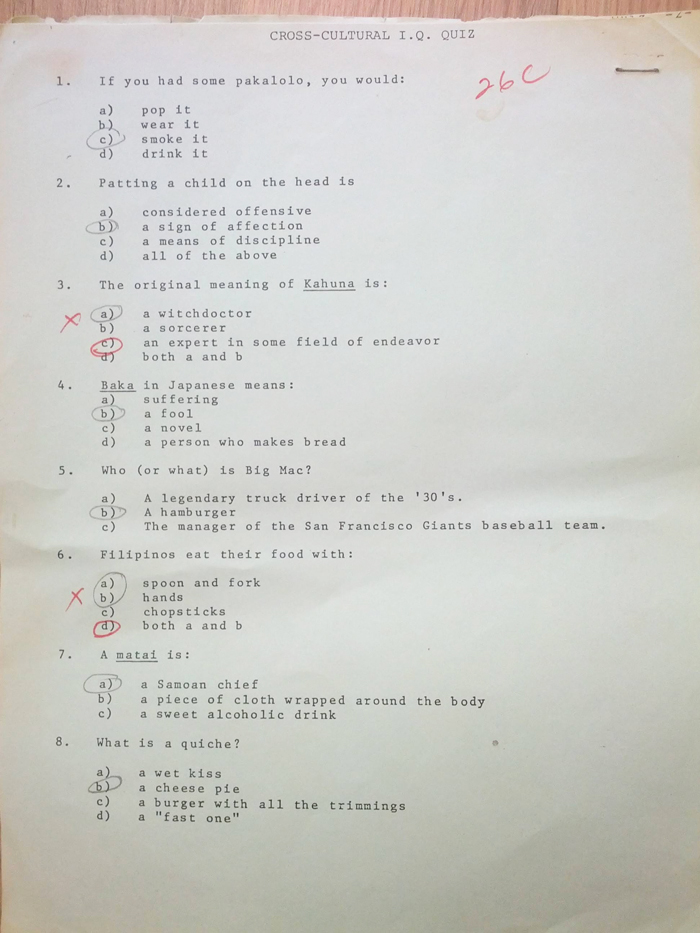 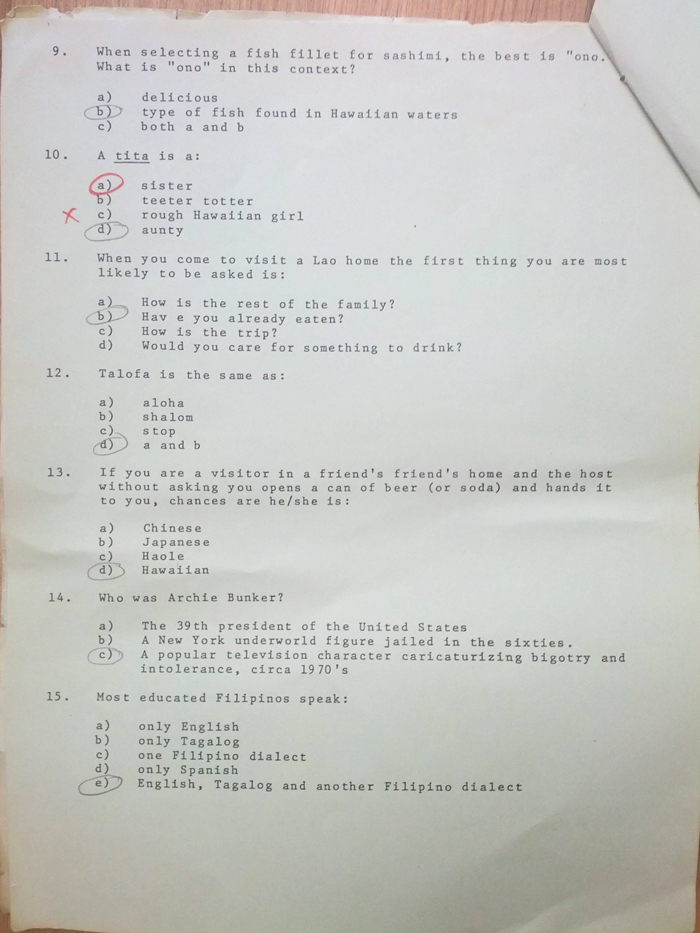 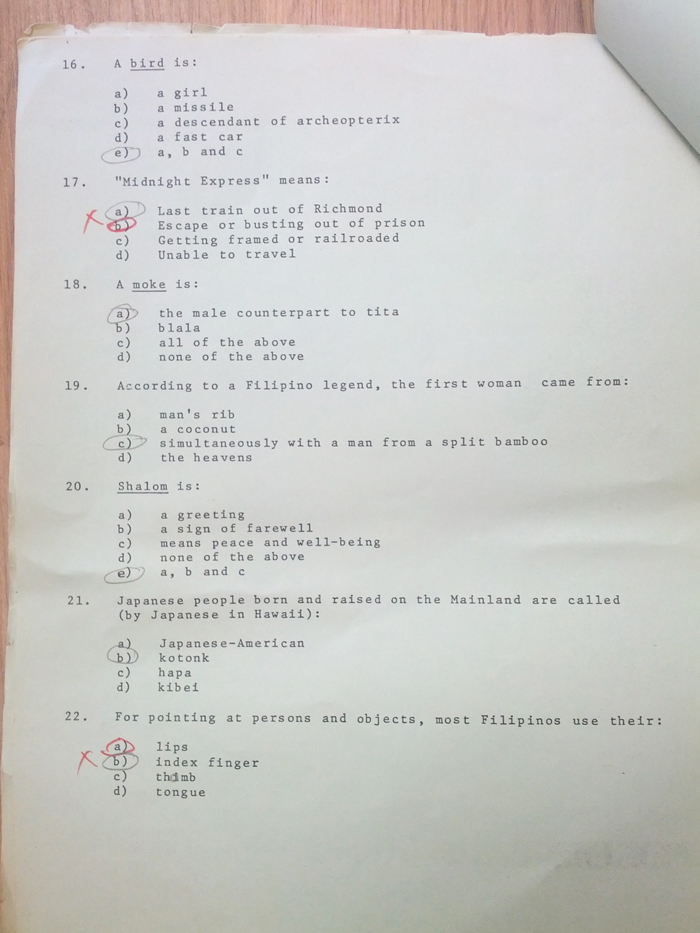 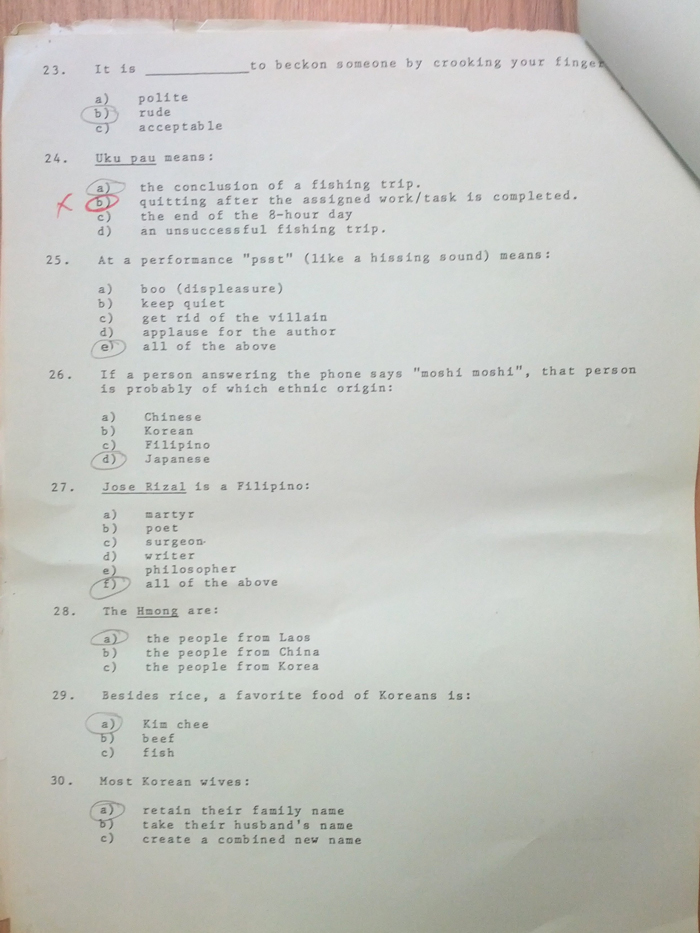 Seeking more information, I tracked down both the person in possession of this “culture test,” the individual who uploaded it, and was eventually led to the granddaughter of the woman whose house it was originally found in—a home in Kaimuki on Oahu—to get a better understanding about the document.

Where in Hawaii was it found?

While an entertaining artifact, they both asked to remain anonymous as they’d rather not have their names attached to it since the language in parts is rather politically incorrect by today’s standards and neither knows exactly what it is to begin with.

“We found it in 2009 when we were cleaning out my grandmother’s house after she passed away,” the granddaughter said. “We honestly don’t know if it was even hers—it was found with no context … I don’t even know if it was maybe from my dad’s generation either. Grandma was kind of a pack rat and kept a lot of random things.”

She was unsure of where the grandmother, who passed away in her late 80s, received her education, but, as for her children, it was Washington Middle School and Kaimuki High. I reached out to the Hawaii State Department of Education to help authenticate the materials and it could not confirm its use or whether it was from a public school.

What decade was it from?

The Hawaii State Archives, however, was able to share some insight into what it could’ve been. Because the state archives traditionally deal with materials pre-1950, it had never seen anything like it in their files or brought in to them for review before, which at least helped date it somewhat as a particularly modern find.

Luella Kurkjian, the branch chief of historical records for the archives, speculated on its possible time period. She noted that the question mentioning the Hebrew word shalom most likely wasn’t something that would’ve been in the Hawaii public consciousness during the late ’40s/early ’50s if this was initially presumed to be a test received by the grandmother during her teenage years.

Also, the question asking “Who (or what) is Big Mac?” eliminates the ’50s and a majority of the ’60s entirely; the hamburger wasn’t introduced until 1968. It also further narrows down and suggests the location to the Honolulu area, since Hawaii’s first McDonalds opened November 2, 1968 in Aina Haina. The reference to “All in the Family” character Archie Bunker excludes all of 1970. That TV show didn’t premiere until January 12, 1971.

The Hawaii State Archives has a theory

Kurkjian’s theory was that if it was a “culture exam” it could’ve been something created and dispensed by the University of Hawaii at Manoa in the ’70s or early ’80s, as an internal exercise within the university’s education department for a course focusing on experimental education as it relates to Hawaii’s diverse ethnic population. This document could’ve quite possibly then been someone’s project, she guessed.

As she reiterated, the references to “pakalolo” (Hawaii slang for marijuana) and kahuna (ancient Hawaiian priest) show there is no denying it was a test of some kind distributed on Oahu—it’s just a matter of channel and motive that’s a mystery.