Sitting in my rental car at a crossroads marking the north end of Red Cinder Road, I realize I’ve arrived a couple of days too late for a final glimpse of the last stretch of original dull cerise asphalt that gave the rural Big Island thoroughfare its local nickname. The red has already been paved over.

The moment is somewhat sad for me.

When I’d heard in early April that Big Island road crews were days away from laying a fresh blanket of modern asphalt over the final two miles of 50-year-old red cinder once spanning the entirety of Route 137 (Red Cinder Road’s official name), I booked a flight to Hilo. 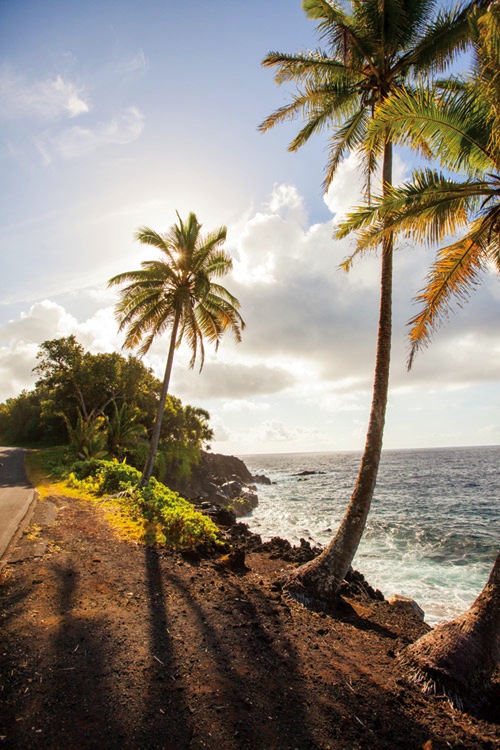 Red Cinder Road winds alongside coastal views like this one.

I’m aware it sounds silly—racing to my former home island to see an old length of asphalt before its obliteration by a new length of asphalt. But I was also anxious to drive Red Cinder Road again. A dozen years had passed since I’d last navigated the 15-mile, single-lane coastal road linking the eastside small towns of Kalapana, Kaimu and Kapoho.

I remembered Red Cinder Road as uniquely scenic—darting into and out of alternately lush and scrubby forest canopy to reveal breathtaking swaths of close-up, wave-weathered Puna coastline. I remembered its surrounding landscape as rugged, unspoiled and—some 30 miles south of Hilo in remote terrain—blissfully devoid of tour groups and tour buses. 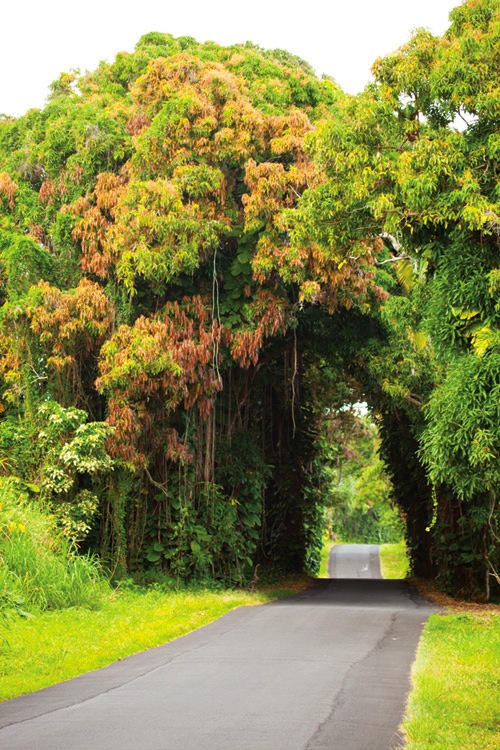 Mostly, however, I recalled Red Cinder Road as a place of comforting memories from my childhood. After mornings watching surf and walking the black sands of Kaimu Beach—now long lost to a 1990 Kilauea volcano lava flow—my grandfather took me for long drives on the bright-red road before heading home. On summer Sundays, my mother and aunt gathered us kids in the car to pick low-hanging fruit off heaving mango trees alongside the road.

As a child, I loved the road’s terrain-clinging twists, turns, steep climbs and sudden drops. I associated its red color with its coolness factor. None of the island’s dark-paved roads were as adventure-filled.

Save for patchwork fixes, the road retained much of its red asphalt until the 1990s when road crews began paving over long stretches with dark asphalt. Residents complained, fearing the end of the road’s  signature identifier, but there would be no do-over. The heavy bunker oil and red cinder mix used to build the road in the 1960s was by 2000 banned by environmental laws. Multiple options were considered to keep it red. But by the early 2000s, all that remained of the original red road was the two-mile stretch near the Kapoho crossroads. When Big Island officials announced this spring that the final stretch would be paved, barely a hint of protest arose. 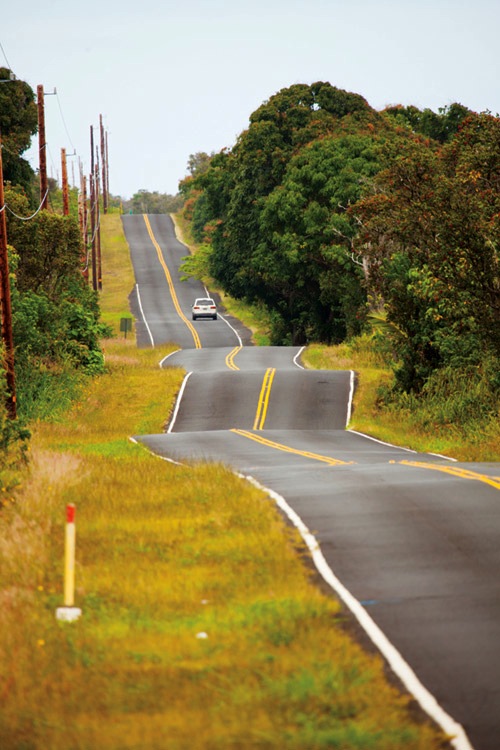 Sadly, all of the main road’s red cinder asphalt has been paved over.

Just past the towering stand of ironwood trees and sea cliffs of MacKenzie State Recreation Area, I drive beneath the mango tree canopies of my youth, a few filled with early season fruit. Pitching rocks to knock a few down, I revel in my success. 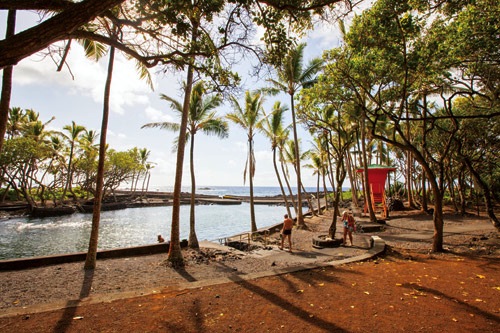 The disappointment of missing the last red remnants of Red Cinder Road still a few miles away, I stop at nearby Isaac Hale Beach Park to watch surfers ride waves into Pohoiki Bay, then take a quick dip in the volcanically heated, ocean-cooled warm springs of Ahalanui Park. 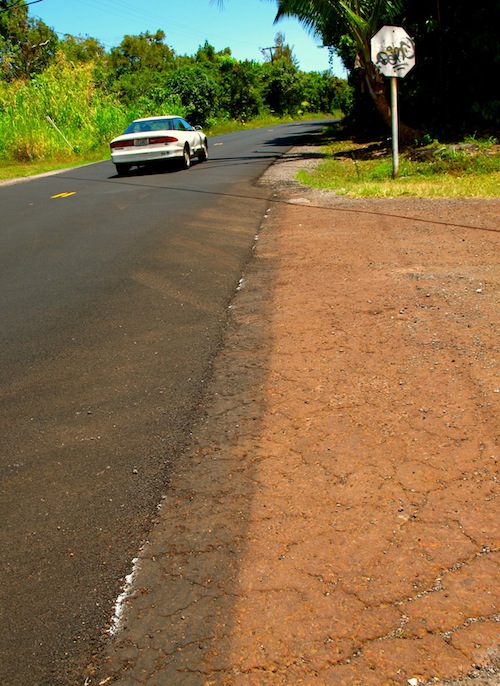 A dull red sliver of the original pavement of Red Cinder Road is visible at this turn-off from the main road near Kapoho.

For now, there is only the sweet-tart taste of semi-ripened mango. And memories, of course. Great memories of this still wonderful old road. 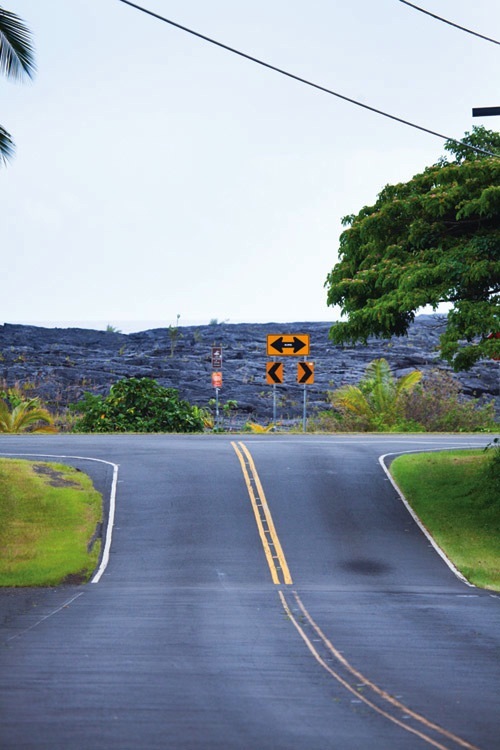 T-intersection and shelf of hardened lava where Kaimu Black Sand Beach once stood.

Hours before idling at the road’s Kapoho crossroads in my rental lamenting my late arrival, I stood at the dark asphalt T-intersection start of the road’s southern Kaimu/Kalapana end. Before my feet, where surf once swirled around the trunks of stately palms and luxuriant black sands at Kaimu Beach, a shelf of hardened 20-year-old lava now stretched 1,000 feet out to sea. 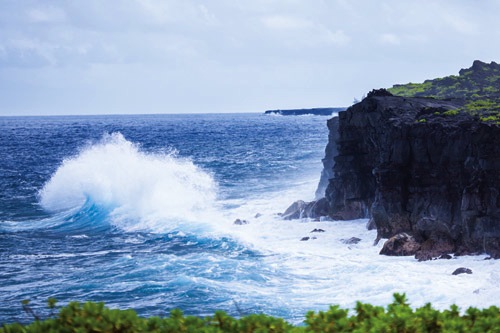 Red Cinder Road was constructed in the early 1960s to connect this seaside community with the agricultural town of Kapoho up the coast. A long-discussed 1950s government plan to bring visitor industry development to the area via a series of modern parkways never panned out. Red cinder was used for the Kalapana-Kapoho connection when plans were scaled down to a single-lane coastal road for area residents. In the years that followed, locals and adventurous visitors would become enamored of the rust-colored road with the unspoiled, unhindered scenery. 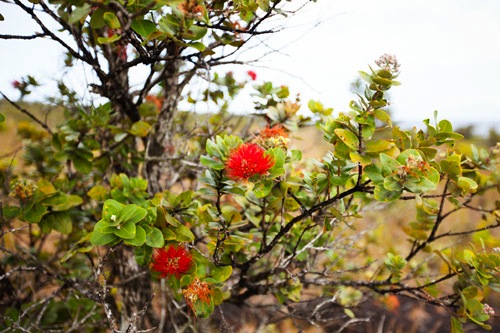 Lehua blossoms on an ohia tree alongside the road.

Heading north from Kaimu, I found the road’s landscape largely the same as I remembered. Tree forests sparse and lush still rise from ancient lava flows until the pullover for unofficially clothing optional, black sand Kehena Beach. From there, Red Cinder Road winds evenly between forest and coastline, often skirting so close to surf pounding against sea cliffs and shoreline that blankets of thick salt spray waft across the asphalt. Along the way, I guided my rental into makeshift pullovers once part of the original road before erosion from crashing waves necessitated bypass loops around them. At each, I sat to watch the angry ocean fight the lava rock coastline.