Buckle up and get ready for an exciting ride.

The dusty red-dirt road I’m bumping along seems to disappear off the mountain ahead of me.

“Where did the road go?” I yell out over the sound of rocks crunching beneath my Jeep, completely aware it’s an optical illusion. My friend in the passenger seat laughs loudly.

It never occurred to me that off-roading around Lanai could be this much fun—I’ve been laughing myself to tears most of the way because of the awkward descents on steep slopes and bumps in the road that have us occasionally catching air. And now, here I am creeping closer to the edge of the mountain waiting for the road to reappear. “There it is,” I say, and my eyes scan its length as it dips down below the mountain’s horizon and continues to snake its way to the sea.

Other Islands discourage off-roading in a rental, but Lanai, with only 30 miles of paved road and over 300 miles of dirt roads, embraces it (as long as the roads are dry). That’s a lot of area to explore on an island that’s only 17 miles long and 12 miles wide. It’s a Hawaii adventure not many know about, especially since most people’s knowledge of the island only goes as far as its former nickname: The Pineapple Island. 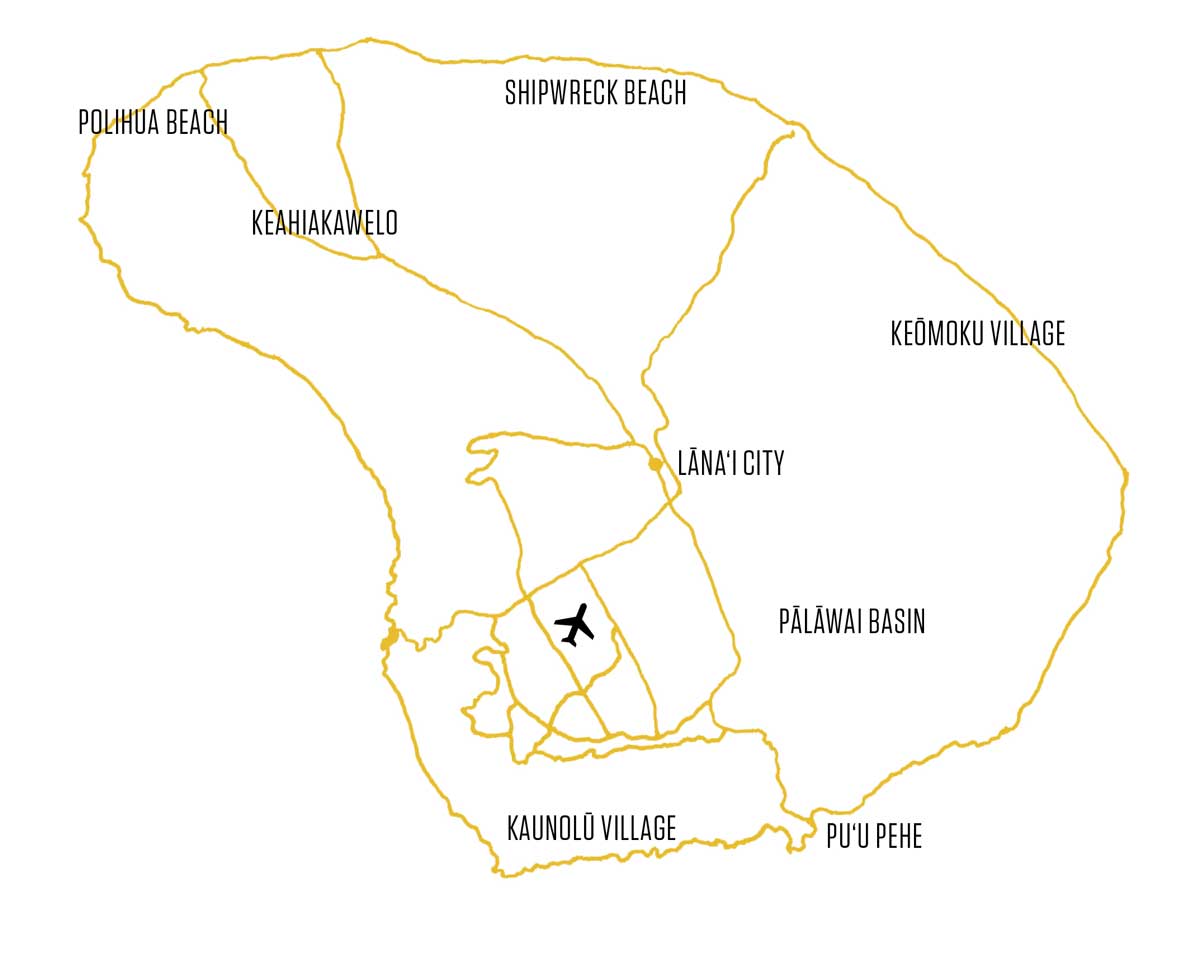 Virtually every piece of usable land—roughly 20,000 acres—was once covered by pineapple plants, but there are no signs of pineapples anymore except for the unfortunate litter of black plastic, once used to keep the soil moist, embedded in the dirt everywhere. The last pineapple was harvested in 1992, and in 2012, tech billionaire Larry Ellison (commonly referred to by residents as “Uncle Larry”) bought 98 percent of the island from Castle & Cooke, one of the five sugar companies that dominated the Hawaii economy.

For first-time visitors to Lanai, the landscape may appear unusual compared to other Hawaiian Islands, with its Cook Island pine trees, few coconut trees and even fewer native plants and flowers. That’s partly due to its plantation history and the brutal effects of wild animals, but today the island seems like its land is in repair: The destructive pigs, goats and sheep have been eradicated; the thousands of deer are being managed through year-round hunting; community groups are meeting to restore an ancient fishpond; and native plants are slowly being replanted.

Lanai is an island with the small-town charm you see in TV shows, where drivers wave to each other on the roads, neighbors drop by with food to share and everyone knows everyone. I feel completely safe navigating the mazes of dirt roads crisscrossing the island, and very fortunate to see some of Lanai’s most cherished archaeological and historic sites.

Upon stepping foot in the fishing village of Kaunolu, the mana (spiritual power) of the place is immediately apparent. A National Historic Landmark, the structural remains of the residents who lived here until the 1880s are well preserved—stones outline where houses, shelters, pens and garden patches once were.

A fan of the famed fishing ground, Kamehameha the Great frequented Kaunolu, and the remains of his house can still be seen on a bluff at the beginning of the trail, overlooking the bay, town and Halulu, a sacrificial heiau (temple) across the gulch.

Petroglyphs mark boulders along the trail from the shoreline to the bluffs—look for the half man, half bird depictions of the deity Halulu. This is a sign you’re getting close to the heiau and an 80-foot precipice with a perfect view of Lanai’s western sea cliffs. At this natural gap, lele kawa (cliff jumping) was once practiced; it’s also where chiefs forced criminals to jump for their lives.

The hike is less than a mile and well-marked with interpretive signs that bring the place to life with stories and descriptions, but be respectful when you visit the historic village and do not disturb these important cultural sites.

Directions: Take Highway 440 toward Kaumalapau Harbor, pass the airport and turn left onto the four-wheel-drive Kaupili Road. At approximately 2.5 miles, turn right and continue your descent another 3 miles toward Kaunolu.

The first plantation on Lanai produced sugar, not pineapple, and remnants of the era can be found at Keomoku, formerly the headquarters for the Maunalei Sugar Co. plantation. The venture was short-lived, lasting from 1898 to 1901, but it increased the population by 700. Some of those people chose to stay in the town following the company’s closure, until the 1950s when the remaining families moved to Lanai City.

Once you reach the end of the paved Keomoku Road on the island’s Windward Side, it will take about 45 minutes of off-roading to reach the town’s centerpiece, Ka Lanakila Church, which is the last standing wooden structure in the village. It was built in 1903 by Hawaiian families, and continues to be cared for by the Lanai community. An old bread oven, a boat and the mill site are some of the other fragments of history you’ll find on the marked trail through this once vibrant town.

Directions: About an hour and a half from Lanai City, take the highway past the Lodge at Koele and turn right onto the paved Keomoku Road (Highway 430). Drive down the windward slopes to the shore and you’ll reach the four-wheel-drive road, where a sign will point you straight ahead in the direction to Keomoku.

Strong trade winds and big channel swells have made the north shore of Lanai a hazardous area for navigation, evidenced by the ships that have wrecked along its 6-mile coastline called Shipwreck Beach. There are at least a dozen vessels known to have been accidentally, and sometimes intentionally, grounded here, from barges and steamships to schooners.

The two most prominent wrecks are World War II-era navy vessels that were intentionally grounded: the YOGN-42, a ferro-cement navy fuel barge (the first wreck you see, near Kaiolohia Bay), and the navy yard oiler YO-21 that’s 6 miles away by foot at Awalua Bay. The YO-21 is one of the few remaining vessels that was present at Pearl Harbor on Dec. 7, 1941. Between those two bookends, you’ll find 19th- and 20th-century ship timbers deteriorating along the shore, while their boilers, anchors and engines have become part of the ocean’s coral reef ecosystem.

Directions: About 45 minutes from Lanai City, take the highway past the Lodge at Koele and turn right onto the paved Keomoku Road (Highway 430). At the sign, turn left onto the dirt road and prepare to hike a short distance on the beach. You’ll see the YOGN-42 about 200 yards offshore.

Writer Alexander Hume Ford compared this windswept lunar landscape to Colorado Springs’ national landmark, Garden of the Gods, back in 1912. Ever since then, that nickname stuck on Lanai, but this wahi pana (legendary place) already had a good name attached to it, as well as a great story. Its traditional name, Keahiakawelo (pronounced kay-aw-hee-aw-kaw-veh-loh), means “the fire of Kawelo” in Hawaiian.

In ancient times, there was a kahuna (priest) on Molokai who became angry with the people of Lanai, thus sending prayers of ill will across the channel to the livestock and the island’s people. Kawelo, who was the kahuna of Lanai, kept a fire lit at an altar in the uplands of Kaa to ward off the evil spirits and send them back to Molokai, inevitably saving his people.

The landscape of Keahiakawelo, as we see it today, is the result of wind erosion and the large numbers of wild animals that once roamed the island.

Directions: About 45 minutes from Lanai City, drive past Koele then turn left onto Kanepuu Highway; this will turn into Polihua Road. When red earth is strewn with large car-sized boulders, you’ll know you’ve arrived. It’s windy; bring a jacket and sunglasses to prevent loose dirt from getting in your eyes.

The white, sandy beach of Polihua is just 30 minutes away from Keahiakawelo. Translating to “cove of eggs,” Polihua refers to the honu (turtles) that frequently climb on the beach to lay their eggs. It’s not a swimming beach—the channel between Molokai and Lanai is known for its powerful currents—but you can beachcomb, eat that picnic lunch you packed (take your trash with you; there are no facilities here), and gaze at Molokai across the sea in solitude, because chances are you’ll be the only one on the 2-mile-long stretch of sand.

Directions: Thirty minutes past Keahiakawelo; just continue down the northwestern slopes of Lanai to the sea. Driving on the beach is prohibited.

If you prefer to let someone else drive, the Four Seasons Resort offers Polaris off-road tours through much of the central region of Lanai, known as the Palawai Basin, between Manele Road and Lanaihale, the island’s tallest peak.

“We try to explain what is here, and we explain what is going on with the island,” says my driver, Jesse, a local girl who was raised on Lanai. After donning our required helmet and goggles, she takes us on a wildly fun ride up the mountain’s muddy roads and makes frequent stops to point out rare native plants and many invasive ones, such as the eucalyptus trees. Under Ellison’s resource management group, Pulama Lanai, efforts have been made to bring back and protect the native plants, but it’s been a difficult task.

She continues our journey upland to the Hii benchlands, and tells us about the Hawaiian dryland agricultural terraces there that are being re-cultivated, then swings us around to see the Luahiwa petroglyphs carved on 20 boulders, and Puu Mahanalua (Twin Hills), where the last eruption occurred on the island and formed Hulopoe Bay.

Among all these stops riddled with fascinating stories and legends, the Naha Trail Overlook is my favorite from the tour, a beautiful vantage from Lanai’s mountaintop with views of Maui’s two mountains, the West Maui Mountains and Haleakala, beside the island of Kahoolawe. fourseasons.com/lanai.

Don’t rely on Google Maps. Download the island’s “Lanai Guide” app on your phone for helpful directions, off-roading tips, a live map and detailed information on all the locations.