The Battleship Missouri Memorial — now located a ship’s length from the USS Arizona Memorial in Pearl Harbor (Oahu)  —will mark the 66th anniversary of the end of World War II in the Pacific with a free ceremony set to begin at 8 a.m. on Fri., Sept. 2 on the “Mighty Mo’s” forward main deck.

The program will also feature patriotic music, a rifle salute and Echo Taps from atop turret one and superstructure, and a special Old Glory Detail by the Navy Region Hawaii Chief Petty Officers.

The anniversary event is free but reservations are encouraged, as space is limited. To RSVP online, click here. Guests are asked to be seated by 7:45 a.m. For individuals without base access, complimentary roundtrip shuttle bus service from the Pearl Harbor Visitor Center will be available beginning at 7 a.m. 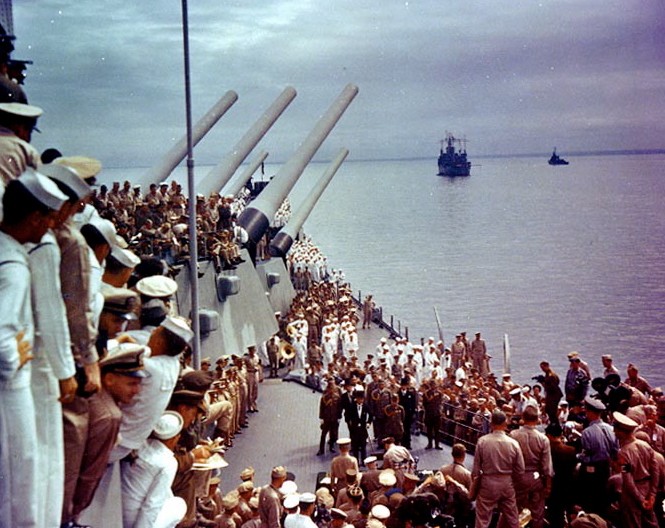 According to a press release issued by the anniversary event’s organizers, Heilman joined the U.S. Marine Corps during WWII and completed boot camp as the highest scorer on the rifle range in his platoon. He was deployed to Okinawa, arriving during Kamikaze bombing raids on the fleet. He later served on occupation duty in Japan, flying as a radio operator on staff of the Commander of the Fifth Fleet, taking intelligence personnel to Hiroshima, Nagasaki and other sites in the Pacific, and even surviving an airplane crash on Iwo Jima. Sgt. Heilman was honorably discharged on Dec. 10, 1947.

Today, Heilman is chancellor of the University of Richmond and serves as spokesman for The Greatest Generations Foundation, a Denver-based, nonprofit sponsoring the return of 20 WWII veterans to Pearl Harbor this month.

For additional information about the Battleship Missouri Memorial, click here.