Photos of Waikiki in the Early 1900s, and Now

These amazing images show how Hawaii's most famous district has changed - and remained the same.

Hawaii’s busiest tourist district has changed a lot over the last century, but some landmarks have stayed the same. Here are some incredible images that show just how Waikiki Beach and its hotels, culture and people have changed. 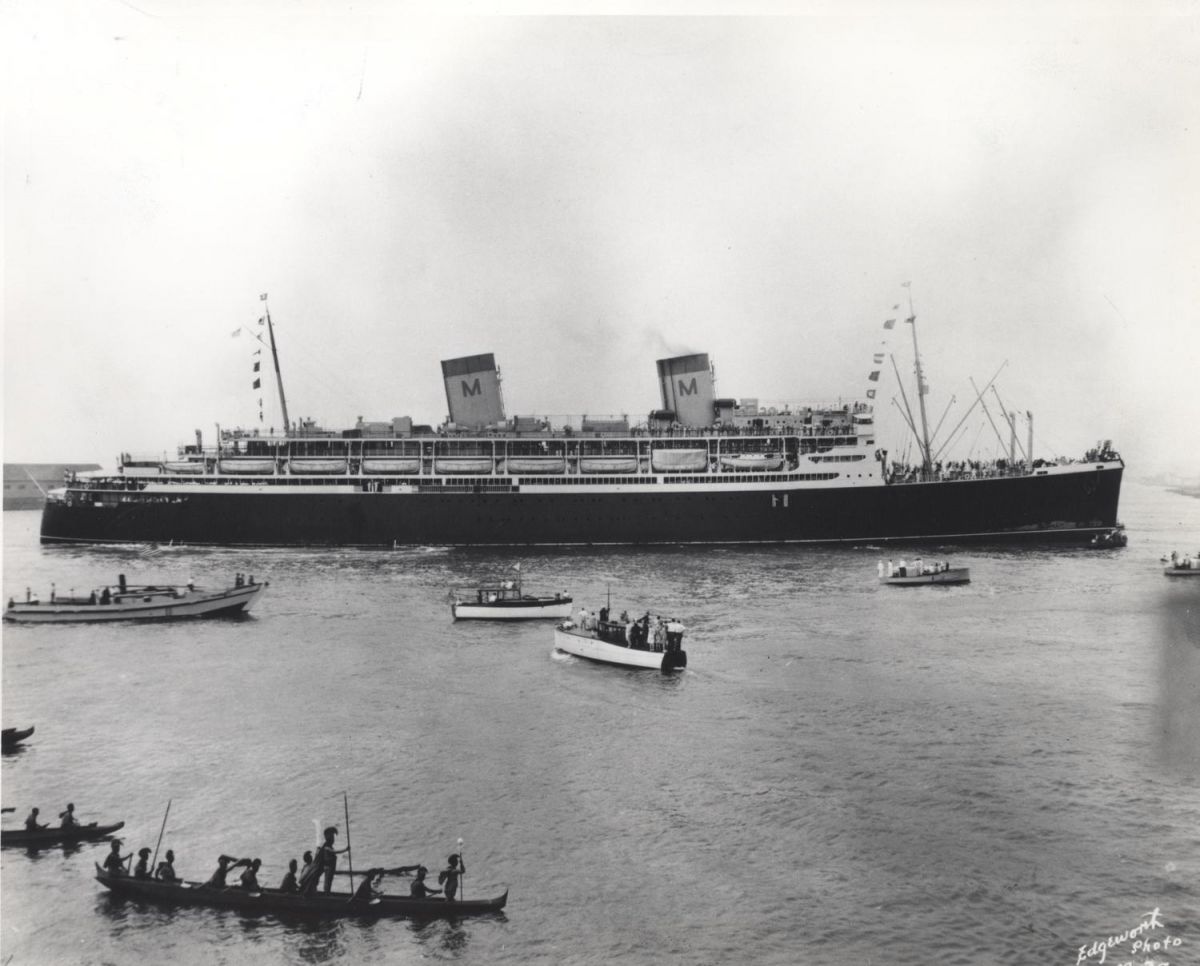 Then: Visitors arrived to Oahu after a days-long ocean voyage. In 1927, Matson built the S.S. Malolo—at the time the fastest ship in the Pacific—the same year the Royal Hawaiian Hotel began welcoming visitors to Waikiki. With passenger traffic increasing, this was the dawn of the visitor industry to Hawaii.

Now: Aloha! You’ll have an amazing view of Oahu’s coastline and Waikiki from the window of your plane as you touch down at Honolulu International Airport, the largest in the state. The airport serves 27 international and domestic carriers, three interisland airlines and four commuter airlines. 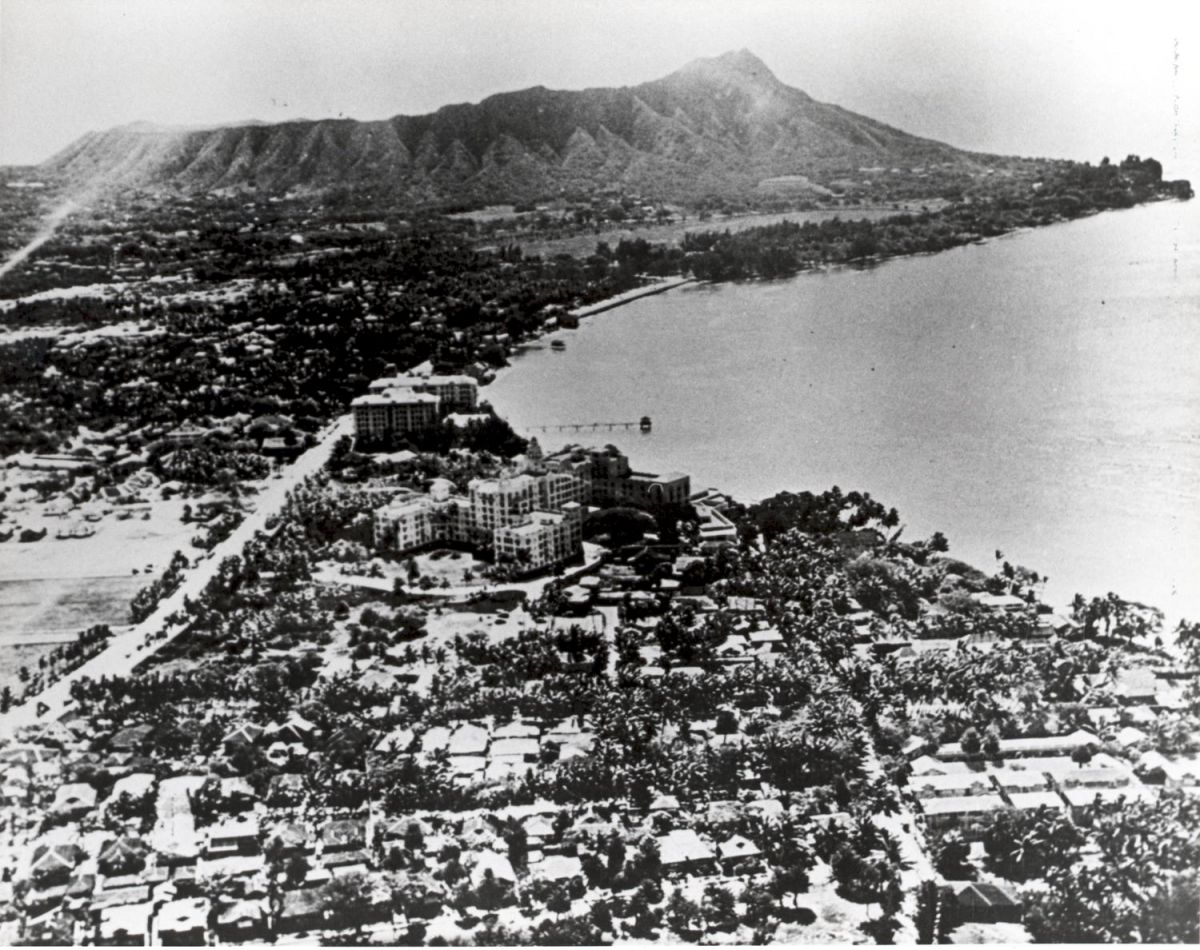 Then: Waikiki means “spouting water” in Hawaiian. It was once a more tranquil area dotted with humble bungalows and beach houses, far from the hubbub of Honolulu. The world began to take notice of Waikiki as a vacation destination when the world-class Moana Surfrider hotel opened in 1901.

Now: Waikiki has something for everyone, from keiki, or kids, who can enjoy the Honolulu Zoo or the Waikiki Aquarium, to adults, who can partake in world-class dining and bustling nightlife. You’ll find a delightful, walkable zone of shopping, restaurants, and, of course, that iconic beach.

Then: At the turn of the 20th century, Hawaiian music, distributed as sheet music, was popular with audiences worldwide. Did you know that the classic song, “Aloha Oe” was written by a Hawaiian monarch, Queen Liliuokalani?

Now: Many cultural celebrations, such as the Aloha Festival, abound in Waikiki. You can see hula performances, music and more. The Aloha Festival, held in September, features a Royal Court introduced on the grounds of Helumoa, where Princess Bernice Pauahi Bishop once lived. The Royal Court is dressed in traditional attire appropriate for Hawaiian alii, or royalty.

The ‘First Lady of Waikiki’ 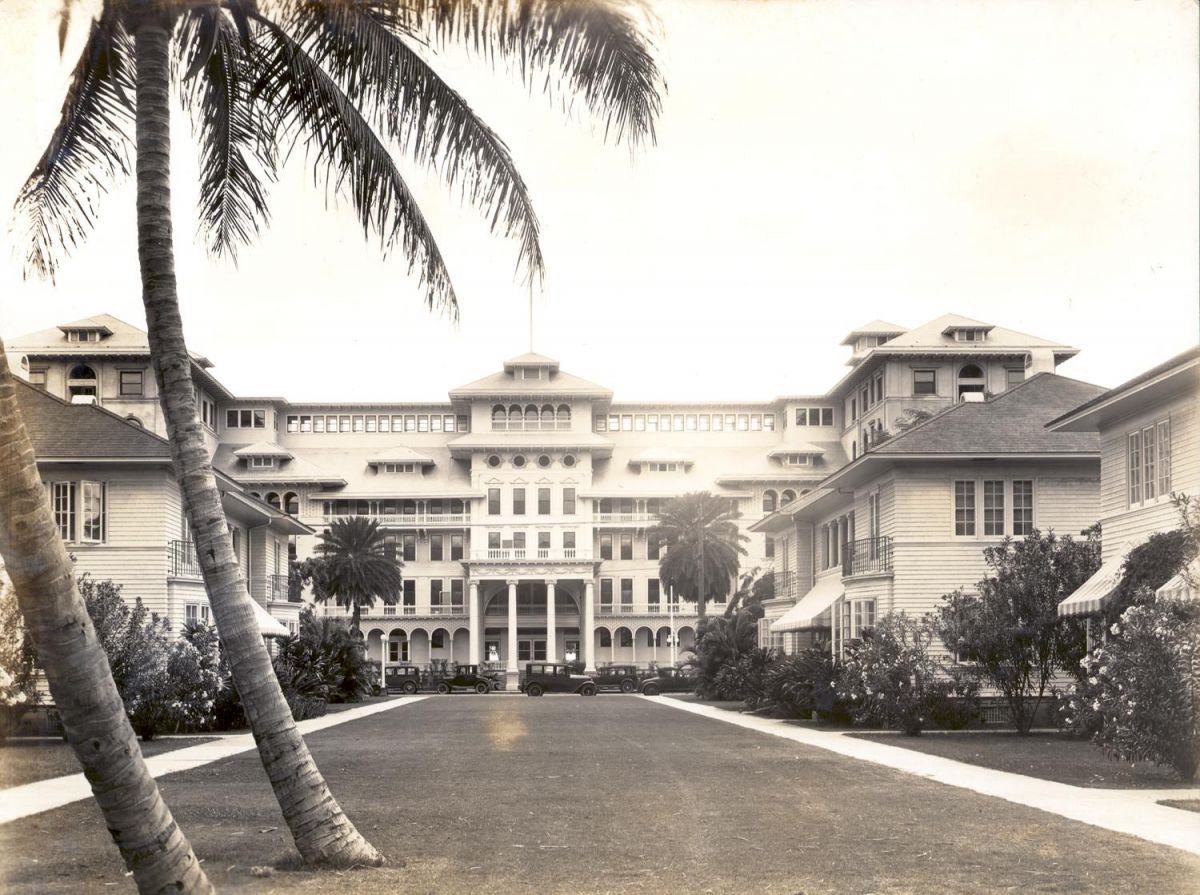 Then: The first hotel built in Waikiki, the Moana Surfrider opened its doors on March 11, 1901. Designed by architect Oliver Traphagen, the grand hotel has European features such as intricate woodwork and tall columns.

Now: Now officially known as the Moana Surfrider, A Westin Resort & Spa Waikiki Beach, the iconic hotel offers a guided historical tour on Mondays and Wednesdays at 11 a.m. Meet in the Historical Room on the 2nd Floor of the Banyan Wing.

The ‘Pink Palace of the Pacific’

Then: On Feb. 1, 1927, the Royal Hawaiian, affectionately known as the “Pink Palace of the Pacific,” opened. The Waikiki hotel hosted 1,200 travelers upon its opening and they were serenaded by the Royal Hawaiian Band. The resort’s unusual hue makes it a great landmark when you’re out swimming, surfing or kayaking, or need a marker on the beach when taking a stroll.

Now: Now called the Royal Hawaiian, a Luxury Collection Resort, it is toasting its 90th birthday. It’s still just as noticeable, even as Waikiki has grown up around it. Be sure to visit the resort’s beachside restaurant Azure, featuring romantic canopies and a seafood-lover’s menu including opah and moi. 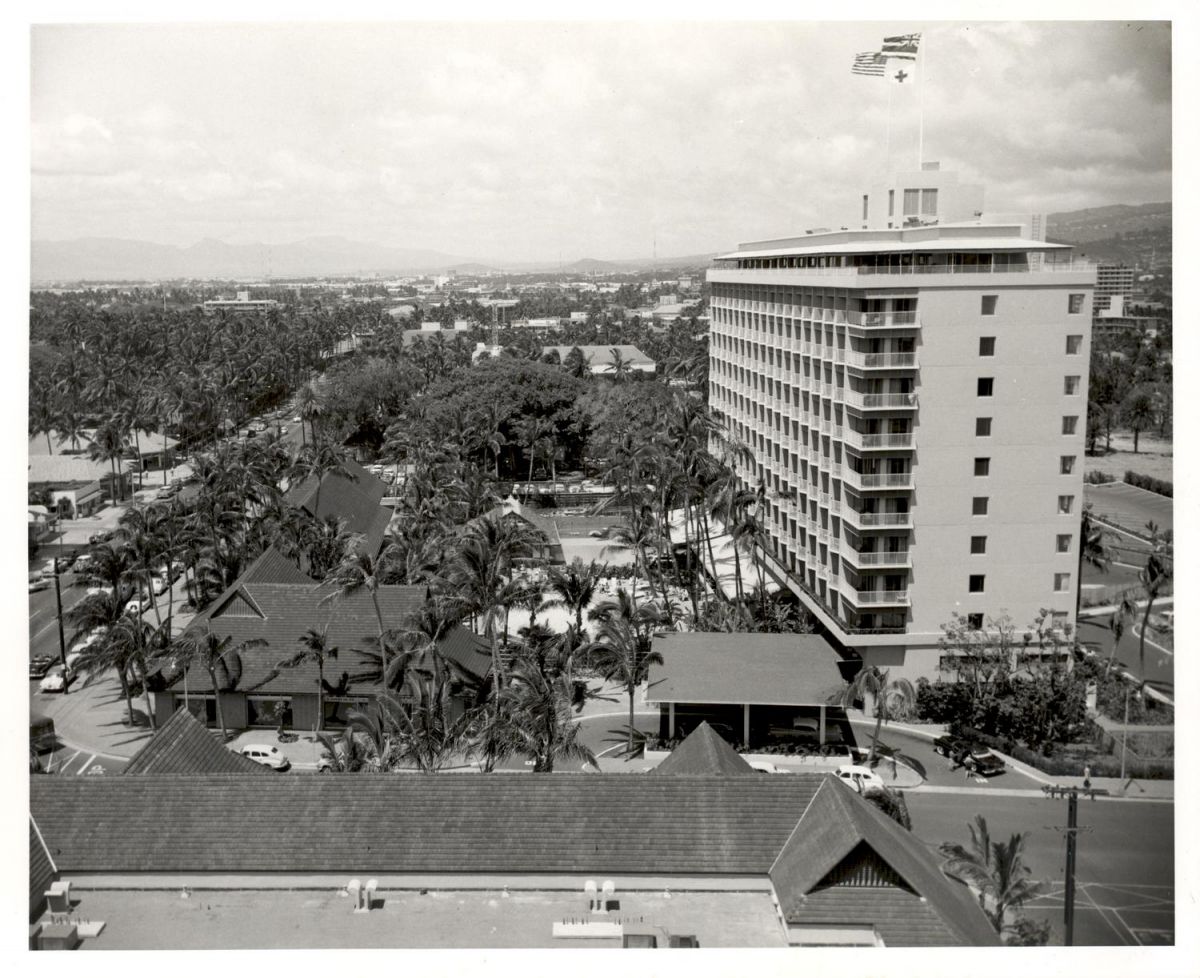 Then: The 1950s ushered in a building boom for Hawaii, just as the Islands were about to become the 50th U.S. state in 1959. In 1955, the Sheraton Princess Kaiulani opened. It was built on the former estate that once housed the hotel’s namesake, Princess Victoria Kaiulani. The hotel project was the largest since the Royal Hawaiian was built 28 years earlier in 1927. Two years later in 1957, the International Market Place, designed by noted Island architect Pete Wimberly, opened next door, offering a delightful mix of bars, shops and eateries.

Then: Starting in the 1920s, a group of young men called “beach boys” assisted visitors in learning how to surf and use outrigger canoes off Waikiki. Two clubs formed, the Outrigger Canoe Club and the Hui Nalu, both consisting of some of Hawaii’s—and the world’s—finest watermen. The most famous of those beach boys is Duke Kahanamoku, who was also an Olympic athlete and is considered the father of modern surfing.

Now: Surf, stand-up-paddle and outrigger canoe lessons are still widely available—and as much fun now as they were more than 90 years ago. However, thanks to modern technology, you won’t have to struggle with a heavy wooden longboard, and you can check what the surf is doing here, via the Internet. You couldn’t do that in the 1920s! 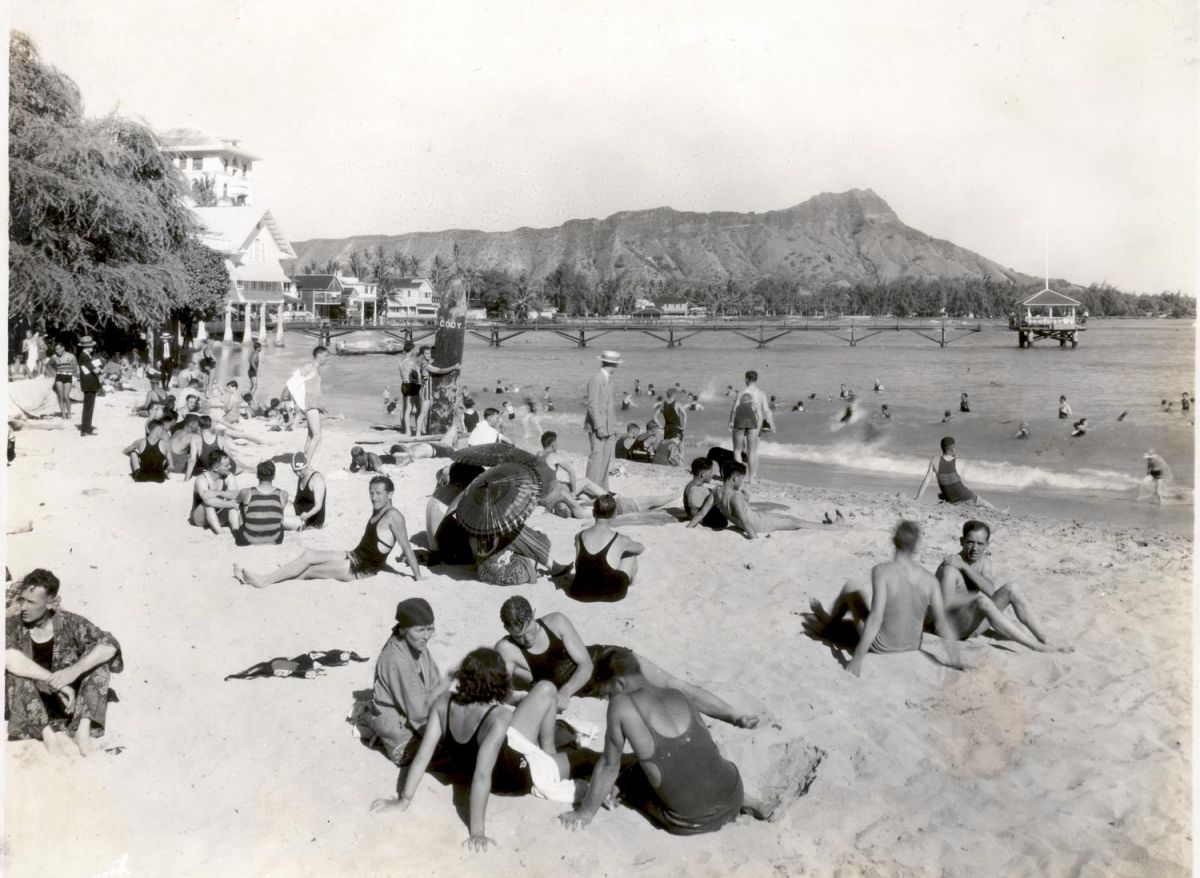 Then: Waikiki Beach is known for its long, rolling break, which makes it ideal for surfing. It also caused erosion problems, though, which is why in the 1920s and 1930s, sand was barged in from California. These beachgoers still look pretty content.

Now: In Waikiki, hotels really are oceanfront. (There’s the Sheraton Waikiki on the left with the infinity pool, and the Royal Hawaiian on the right.) No matter how time passes in Waikiki, one thing is for sure: You have your pick of luxurious places to stay, and an amazing beach.