Approaching the final week of her reign, the dancer reflects on the journey of carrying hula's most prestigious crown.

Her award-winning performances during Miss Aloha Hula, the contest for its prestigious solo title, brought a powerful duality to the stage (her oli, a rapid-fire and intense Hawaiian chant alone, was must-see television) that emphasized not just the emotional capacity of this native art, but holds a mirror to the talents and knowledge of her two kumu hula (hula teachers), Lono Padilla and Keano Kaupu IV.

As her reign comes to a close, Carr and her kumu of Halau Hiiakainamakalehua, reflect on the year-long journey, what it takes to win and the enduring bond between kumu and haumana (student).

How would you describe the student-teacher relationship for those who don’t dance hula?

Kaiulani Carr: Family. I spend more time with my kumu then I do my own parents or sisters. They know more about my life than my own parents do [laughs]. We created a bond that I’m so thankful for. If there’s anything I’m grateful for in this Miss Aloha Hula journey it’s that. I enjoy coming to hula and learning from them and being around them. I think that reflects in my dancing, too. When you enjoy coming to halau (school), it shows on stage. It shows in your performance, and, for me, just when I dance in general. I feel like I’m home when I’m dancing. Like I have a foundation.

And from a kumu’s perspective? Sounds like it’s about more than just teaching students different hula moves.

Lono Padilla: As any kind of teacher in any kind of profession, you’re more than just a teacher to a student, you become a mentor, a brother, a sister. We’ve had to be all kinds of people in our career as kumu hula. We’ve been parents, marriage counselors, we’ve even been movers [laughs]. Our students are involved in our lives just as much as we’re involved in theirs.

Keano Kaupu: Our students are our world. They’re our children, from age 3 to 65. And, from a kumu’s perspective, it’s one of the most honorific titles to have. It’s not just an ego thing that they call us kumu. There’s a kuleana, a responsibility, we have to our students and the kumu who taught us. The students look up to us, and, sometimes, the students become our teachers. Without students, we didn’t know how to be kumu.

What do you look for when choosing a student to compete in Miss Aloha Hula?

Padilla: First and foremost, there needs to be some kind of skill, a starting point to work with. You can’t just pluck a random person off the street. After that, it’s a combination of things. For instance, finding the right songs and chants to fit the person, so that you can draw on their strengths to pull out the best performance.

Kaupu: Definitely skill. But, for me, that’s only about 20 percent of it. Nowadays, there are so many good dancers, there needs to be something extra in the dancer. Charisma. Also, loyalty and committment. And, their willingness and ability to fully submit to their kumu. It’s hard for someone to do that. 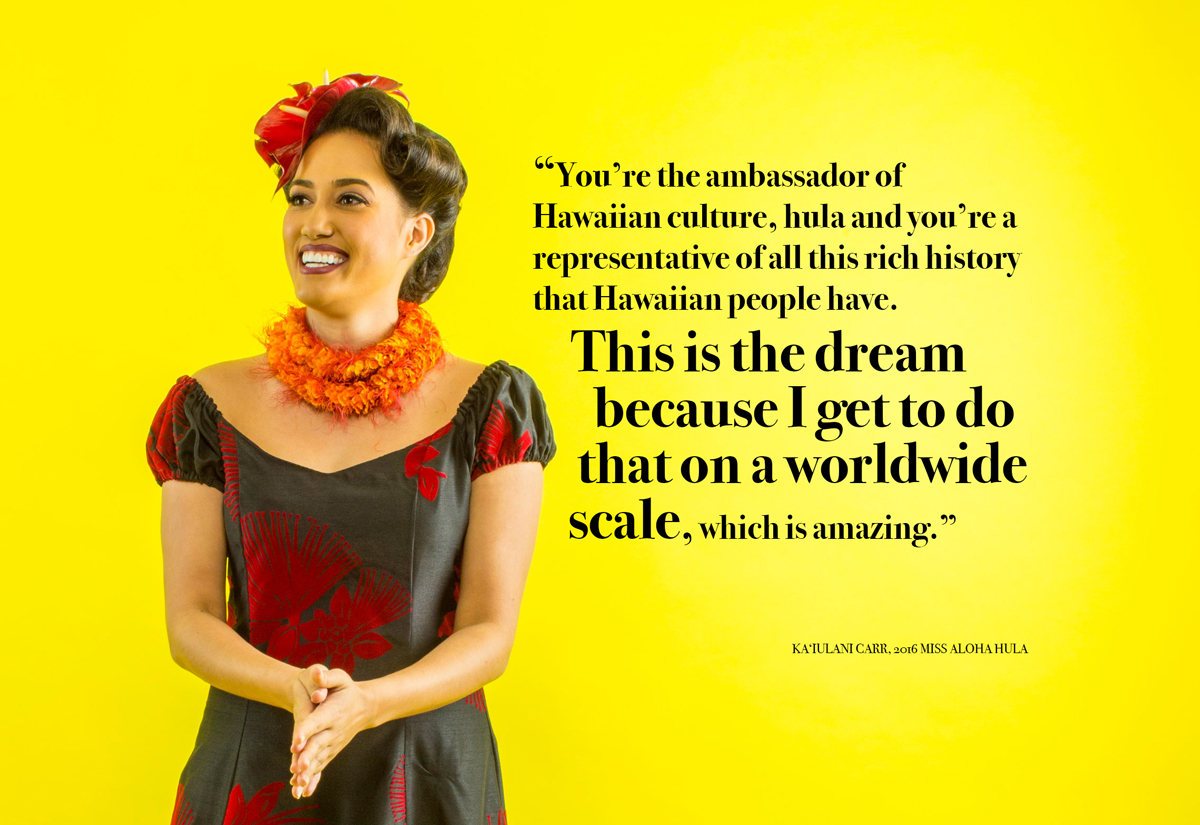 What did you see in Kaiulani?

Kaupu: With Kaiu, she was very willing to do whatever. Like, “I want to do this, just do whatever you got to do with me.” It wasn’t easy. Even though you submit, it’s not easy for the dancers. We saw her strengths and her weaknesses. We attacked those weaknesses. She’s a strong, young lady. Very strong-minded. But, sometimes she doesn’t tap into the tender side, she puts up a block to protect herself. She’s fighting and doing everything you ask of her, but there’s something missing from the hula. From her, it was the emotional connection. She loves to dance and the story she’s sharing, but to emotionally connect herself personally, she had a hard time with. She’s a very expressive dancer, but we needed the genuineness. With Kaiu, it was that sparkle of letting down the wall with us. And, as soon as she started to do that, my heart began to open. That’s when I knew: She’s the one.

Now that you’ve won this title, what does the Miss Aloha Hula title mean to you?

Carr: It took on a new meaning for me this year. I always used to think Miss Aloha Hula was the end all, be all, the greatest thing ever—and it is, it still is—but it’s become so much more than that. My grandma always said I had a kuleana in our family, that mine is to perpetuate culture through hula ever since I was little. You’re the ambassador of Hawaiian culture, hula and all this rich history that Hawaiian people have. This is the dream because I get to do that on a worldwide scale, which is amazing. Sometimes, I just sit with that and think, ‘Wow, this opportunity I have.’ I’m very thankful and blessed.

Advice for next Miss Aloha Hula.

Padilla: Be a good representative. Basically, that’s it. You represent hula well.

Kaupu: Have a purpose. Have a platform in mind in what you want to do with it during your reign and after. It can be a great stepping off point for the rest of your life. And, don’t make your kumu shame.

Carr: Enjoy the journey. It goes by really quickly. This year went by so fast. When you’re up on stage, just live in it and that because it only happens one time. And, taken from a former Miss Aloha Hula who told me this when I won: Aloha comes first in Miss Aloha Hula, so always be aloha first.