If you’re on Oahu this week and you happen to be a golfer or a fan of the sport, you’re in luck.

The LPGA LOTTE Championship, presented by J Golf, is bringing the Ladies Professional Golf Association to Hawaii for the first time in two years. The inaugural tournament, which got under way with qualifying play yesterday, will continue through Sat., April 21 at Ko Olina Golf Club. More than 140 professional women golfers are slated to tee up for a share of the $1.7 million purse.

The pros will be on the course — on the west side of the island — for a practice round today. Admission is free. Also, tournament organizers are holding a free event dubbed Ladies First! Golf Clinic, set for 4:30 p.m. at the Ko Olina Golf Club’s practice range. Golfers and non-golfers (both women and men) are invited to take part in the clinic, which will feature Paula Creamer (2010 U.S. Women’s Open champion) (pictured, below), Stephanie Kono (Hawaii native and 2012 LPGA Tour rookie), and 13-year-old Mariel Galdiano (the youngest qualifier for the 2011 U.S. Women’s open).  The pros will share golf lessons and life lessons at the hourlong clinic. To register for the event, click here.

In addition to Kono, who grew up in Honolulu and started playing golf at age 6, other well-known Hawaii golfers playing in the tournament include Michelle Wie (an Oahu phenom who turned pro shortly before her 16th birthday in 2005) (pictured, above) and Ayaka Kaneko, also of Honolulu. 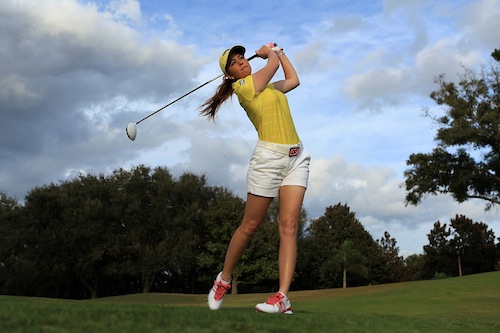 The tournament’s official “pro-am” will take place tomorrow, and the first round of championship play starts on Wednesday and wraps up on Saturday.  The championship rounds will be broadcast live on the Golf Channel each day, starting at 12:30 p.m. Hawaii time.

Earlier this year, the LPGA signed a three-year agreement with LOTTE, an industrial conglomerate in Korea and Japan, as title sponsor. J Golf, the LPGA’s television rights holder in Korea, is the presenting sponsor. The tournament will be a 72-hole stroke play event.

In a news release issued by the tournament’s organizers, LPGA Commissioner Michael Whan said: “Together with LOTTE and J Golf, we look forward to returning to the Hawaiian Islands, where our Tour has such a great history of fantastic golf.”

Admission is set at $10 per person daily, Tuesday through Saturday. Tickets are available for purchase at the main gate. Season Badges are $25 and good for admission throughout the week. Children age 16 and younger will be admitted free when accompanied by a paid adult. Parking is $5 per vehicle. The tournament provides a free spectator shuttle service from the parking area to the admissions area.

No camcorders or cell phone videos at any time throughout tournament week. No cameras are allowed from Wednesday through Saturday.

For more information about the LPGA LOTTE Championship, click here.