Scientists on the Big Island are tracking the buildup of a raised lava lake in Puu Oo crater on Kilauea volcano’s east rift zone.

A recent eruption update report issued by Hawaiian Volcano Observatory describes the lava lake, which now rises above the floor of the crater to a height of about 33 feet, as resembling an above-ground swimming pool. Puu Oo’s floor is about 170 feet below its crater rim.

On Friday, the observatory released a video, shot with a time-lapse thermal camera, that tracks the formation of the lava lake over a two-month period. (You can check out the video at the bottom of the page.)

Lava drained from Puu Oo on March 5, when the crater’s floor deflated and collapsed during the Kamoamoa fissure eruption. The thermal camera, which began recording on March 18 — shortly after the Kamoamoa fissure eruption paused — depicts an abrupt return of lava to the crater floor on March 26. Since then, lava refilling has continued in “fits and starts,” contributing to the ongoing development of the lava lake, according to observatory reports.

Lava is being funneled into the lake through a vent near the western edge of the lake. According to recent reports, small changes in the lake’s levels are prompting frequent overflows, which, in turn is building the surrounding levee higher as lava cools and hardens. The buildup is further pronouncing the lake’s perched appearance.

The lake’s recent lava levels are as described as “fairly stable,” with “nearly regular 15-minute cycles of abrupt draw-down followed by slow refilling” tied to a “tremor burst and a small tilt jump,” according to an eruption update report issued this week.

On May 20, a new vent began erupting on the western edge of the crater’s floor, also sending fresh lava into the lava-drained area around a raised lava lake.

The Puu Oo-Kupaianaha eruption of Kilauea — ongoing since 1983 — ranks as the most voluminous outpouring of lava on the volcano’s east rift zone in the past five centuries. 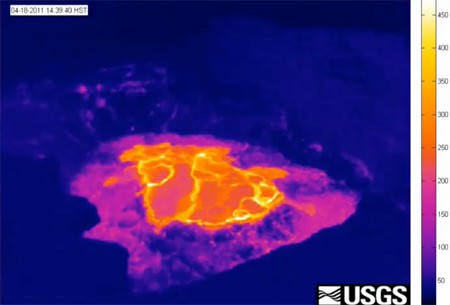