Scientists on the Big Island are monitoring a fresh stream of lava plunging into a lava lake deep within Halemaumau crater on Kilauea volcano’s summit.

At the Halemaumau crater floor, the pit’s diameter is about 460 feet. Its depth is estimated at 660 feet. Since November 2009, a lava pond surface has been visible in a hole in the floor of the pit.

Scientists are also tracking lava flow and the status of a perched lava lake in the Puu Oo crater on Kilauea volcano’s east rift zone.

Last week, an observatory report noted that the lava lake resembled an above-ground swimming pool, with its levee rising to a height of about 33 feet. At that time, Puu Oo’s floor was about 170 feet below its crater rim. Now, thanks to lava lake overflows, the floor has climbed to 128 feet below the rim, with the perch reportedly topping out at about 10 feet above the crater floor.

Lava drained from Puu Oo on March 5, when the crater’s floor deflated and collapsed during the Kamoamoa fissure eruption. The thermal camera, which began recording on March 18 — shortly after the Kamoamoa fissure eruption paused — depicts an abrupt return of lava to the crater floor on March 26. Since then, lava refilling has continued in “fits and starts,” contributing to the ongoing development of the lava lake, according to observatory reports.

VIDEO: When this video was recorded, the lava lake within Halemaumau crater’s vent cavity was 164 yards wide. Spattering can be seen in the upper-left corner of the frame. A steady lava stream is in the lower-right portion of the frame. (Click on frame to watch.) 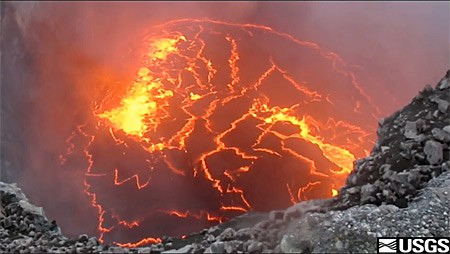