Why Hawaiian chiefs once coveted Big Island’s Kiholo Bay, and you will too

This dazzling lagoon of black sand and aquamarine water on the North Kona coastline is a magical place.

The main attraction amid this idyllic tropical setting, however, is the spectacular Wainanalii Pond. Big Island locals simply refer to the vibrant-looking pool as the “blue lagoon.”

Having resided on the island for the past 25 years, I have fallen in love with a particular handful of locations to photograph. Kiholo Bay, home to this magical lagoon, is one of these. Once you set foot inside this extensive rugged coastal environment, you will understand why.

Kiholo Bay is just one portion of the much larger Kiholo State Park Reserve established in 2002. A lava flow from Mount Hualalai created the land that forms the bay to the south, circa 1801, and the entire area encompasses 4,362 acres along an 8-mile stretch of coastline. Here, you’ll find a variety of Hawaiian archaeological features, such as a path from Kiholo Bay south to Nawaikulua Point that’s part of the Ala Kahakai National Historic Trail.

Located 11 miles north of the Ellison Onizuka Kona International Airport, Kiholo is relatively easy to find. On the Queen Kaahumanu Highway (Route 19), a scenic lookout near mile marker 82 is a good place to pull over and enjoy a panoramic view of Kiholo Bay, the South Kohala coastline and the island of Maui in the distance. Kiholo’s popularity has increased through the years; not long ago, the area was an off-the-beaten-path hidden gem with just a few daily visitors.

Such is the case today at Kiholo Bay, with hardly anyone in sight. There are two main entry points into Kiholo. The first is a bumpy dirt road slightly south of the lookout, leading to a black sand beach on the south end of the bay. Depending on conditions, this route is generally accessible by most vehicles; it provides a quicker passage to the ocean but puts you farther away from the lagoon.

Reaching the magical pool directly, via the second entry, requires parking off the highway north of the scenic lookout near mile marker 81. Just look for a few parked cars on the makai (ocean) side to confirm you’re in the right area. From there it’s a mile hike along the foot trail that winds through aa (stony) lava fields and limited vegetation. Since many of the sites at Kiholo Bay are not close together, moderate hiking is involved.

I take the second route in the early morning hours, and walk beneath the shadows of numerous kiawe trees. Hiding from the intense sun along the coast will be difficult, so I enjoy the shade while I can. Trekking onward I know that adventure looms just ahead.

Soon I arrive at the ocean’s edge, where the landscape changes drastically. It feels like the old days: The pebble black-sand beach is empty. As I make my way north toward the blue lagoon, other sights catch my attention: sea turtles basking on the beach, two large fishponds surrounded by lush tropical fauna and a vibrant blue ocean bounded on the north side by dark black pahoehoe (smooth) lava flows, providing a startling contrast in color.

The two fishponds hold special significance. These interconnected spring-fed pools host abundant native species of fish, along with opae (shrimp) and hapawai (mollusk), and the ponds have historical connections to Hawaiian moolelo (stories). Extending outward from one of them is a 200-foot stone auwai (ditch) that connects the ponds to the ocean. During high tides, sea turtles utilize the waterway to enter and exit the brackish water.

Kiholo Bay was favored among Hawaiian chiefs, including King Kamehameha, for its plentiful fish supply and protective location. Kamehameha was quick to recognize Kiholo’s uniqueness. He oversaw the construction of a large fishpond separate from the others, which was later destroyed in 1859 by a volcanic eruption from Mauna Loa nearly 30 miles away.

Heading farther north, I hug the shoreline along the pahoehoe lava rock. Over the years, other lava flows have occurred in this area, but eventually, they all ceased, leaving behind the beautiful sight before me now. The blue lagoon description might seem a bit cliché, but it fits Wainanalii Pond perfectly. The turquoise-colored pool provides a sanctuary for countless fish and other marine life. Green sea and hawksbill turtles rule the pool.

As the edge of the lagoon nears, the ocean beckons, offering a reprieve from the heat. Marine activities inside the lagoon include swimming, kayaking, snorkeling, stand-up paddleboarding and just floating atop the clear water. Out in the ocean toward the middle of the bay is a surf spot and scuba dive site.

Although enticing, snorkeling conditions inside the lagoon are not always ideal. The mix of salt water with fresh water muddles visibility. It’s estimated that around 4 million gallons of groundwater pass through the fishponds in this area each day. Nevertheless, I capture several good images with my underwater camera.

Away from the lagoon, many other sights await. The stretch of coastline south of the blue lagoon leads past several rustic beachfront homes and, often, local fishermen casting their poles. Further along is Keanalele, a sacred pool of fresh water inside a lava tube cave. It’s possible to wade into the pool, but caution is advised due to tidal changes.

Beyond lies the main part of the black sand beach. In the late 1890s, cattle ranchers used the beach as a staging area, informally christening it Shipping Pen Beach. In 1946 and 1960, tidal waves caused a fair amount of destruction in this area and altered the landscape along the shore.

The history and beauty at Kiholo Bay is limitless. No matter how many times I come to Kiholo it always feels a little different; it’s a unique environment resonating in Hawaiian history. As I hike back to my car parked along the highway, I know it won’t be long until I return. It’s one of the joys of living on the Big Island—knowing that places like this are always within reach. 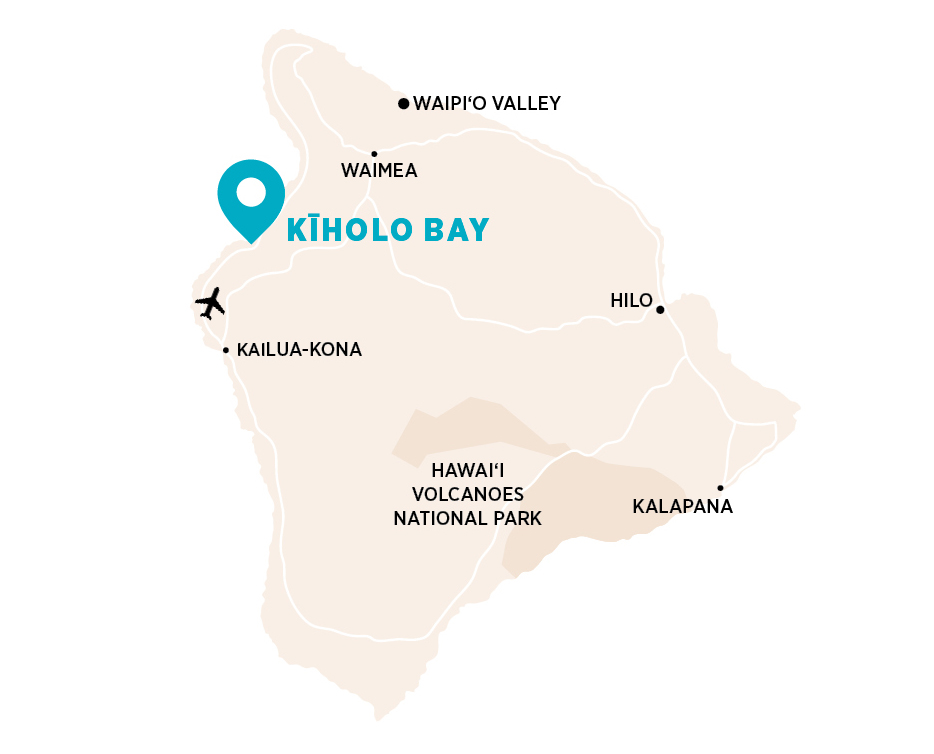