Bits of confetti may still be scattered here and there. And there may be leftover bottles of champagne in many refrigerators. But New Year’s festivities wrapped up earlier this week, right?

Not in the Islands.

Hawaii’s other New Year’s holiday, Chinese New Year, falls on Jan. 23 this year but festivities will get under way on Fri., Jan. 6 in Honolulu’s Chinatown with the start of the two-day United Chinese Coalition’s Chinese New Year Festival.

The free festival will be held in the Chinatown Cultural Plaza, 10 a.m. to 10 p.m. both days. Exhibits and entertainment include: Chinese dancing and singing, feng shui presentations, arts and crafts, martial arts demonstrations, and Chinese fortune readings. Vendors will also be serving up Asian cuisine.

Here’s a listing of other free events slated to kick off the Chinese year 4709 — a brand new Year of the Dragon — in Honolulu’s Chinatown Culture & Arts District. Gung Hee Fat Choy! Be happy and prosperous! 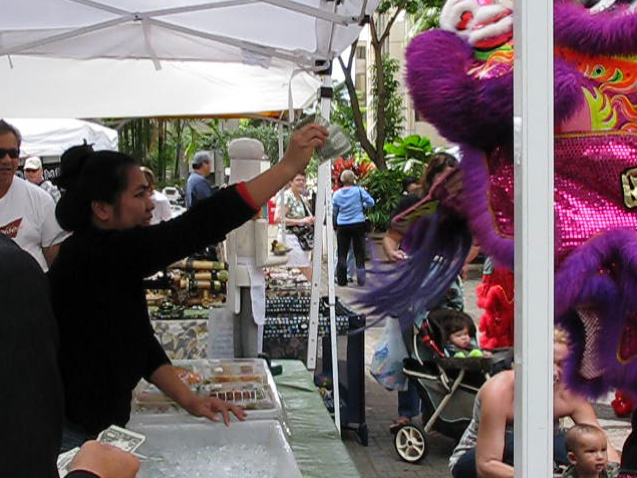 A lion dance blessing is set for 8 p.m. on South King Street. Area retail stores celebrate by lighting firecrackers and offering lisee (good luck money placed in red envelopes) to dancing lions (pictured, left). According to Chinese lore, the face of an aggressively dancing lion, along with accompanying loud drumbeats and crashing cymbals, aims to scare off wicked spirits.

This street fair event will feature four main stages spotlighting entertainers from live bands to lion dancing. Vendors will be stocked with plenty of arts and crafts, cuisine from all over the world, bouncers and more.

The parade is expected to include more than 80 marching units, with a 150-foot dragon at the end of the lineup.

Similar in format to this weekend’s event, the festival’s second round will be held on the eve of the new lunar year, and will showcase exhibits, entertainment and Asian cuisine.