Squinting into central Maui morning sunshine, I survey blue skies directly above a Hike Maui van and worry about the waves of cumulus camouflage rushing toward our alpine hiking destination: the summit of Haleakala volcano.

My heart sinks a bit at the sight. I begin wishing that the warm, sunglasses-and-T-shirt weather in the sea level Kahului parking lot I’m standing in could somehow relocate to the cinder-coated summit of the massive 10,023-foot shield volcano looming large in the distance.

“We will probably get rained on today,” Hike Maui naturalist guide Erik Thorup says offhandedly as our half-dozen strong group loads daypacks into the tour van. The other hikers, visiting the Islands from U.S. Mainland and Canada locales known for lingering cool and rainy seasons, appear completely unfazed by this dire (to me, at least) weather prediction. Instead, they prep cameras and chat about Sliding Sands, Keoneheehee in Hawaiian—the famously scenic and silent Haleakalā National Park trail we’ll be hiking, once we reach the summit.

As our van departs Kahului for the two-hour ascent to the trailhead, it occurs to me that, after living in balmy Honolulu for several years, I may be at risk of becoming a weather wimp. Inspired by the all-weather outdoorsy types around me, I resolve to toughen up and enjoy whatever Mother Nature dishes up today.

And that’s part of the fun, says Thorup, who has led countless hikes at Maui’s tallest peak.

“The weather can change in minutes,” he says, of Haleakala. “In one day, I have gone from heavy, cold rain that soaked every inch of clothing and gear, to clear sky that allowed me to dry out, followed by cloud cover and cold again. I have had days when shorts and no shirt were in order, and days when ice and sleet were blowing horizontally in 30 mph winds.”

All part of the fun, I try to remember.

As we pass by rolling ranch lands on Haleakala’s lower, west-facing side, Thorup relays details about the area, which, at one-time, included an abundance of sandalwood trees. Nearly 200 years ago, King Kahemhameha the Great and others began exporting the aromatic wood, prized in Asian markets for herbal and medicinal attributes. Within a decade, the trees had been all but harvested into commercial extinction in Hawai‘i, a place once known to the Chinese as Tahn Heung Sahn, or Sandalwood Mountains. Sandalwood restoration efforts are under way, but, for now, this Upcountry stretch of Haleakala Highway, which offers sweeping roadside views of agriculture-rich central Maui and the West Maui Mountains, is dominated by green swaths of scrub flora. 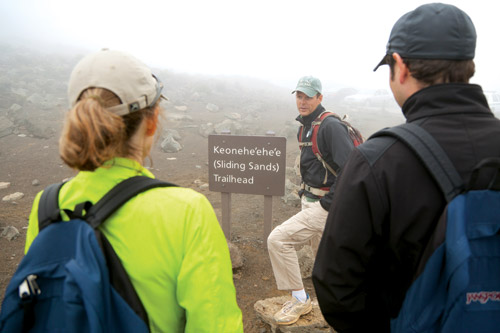 Clouds drifting into the summit area at Haleakala volcano during our hike. Photo by Peter Cooley.

At the summit, talk in our van turns to the geological forces that created Haleakala. The volcano, which makes up the entirety of East Maui—a full three-quarters of the island—is believed to have begun its rise from the ocean floor more than 2 million years ago. Now considered dormant, the volcano has erupted only six times in the past 1,000 years, with the last eruption occurring about three centuries ago. A display in the summit’s visitor center notes that the next blast could occur within our lifetime.

Mother Nature, thankfully, has other plans for us today.

Our six-mile hike starts near the visitor center, which, from sunrise until midafternoon is the go-to place for information about the day’s lineup of park interpretive programs, weather forecasts and updates on the condition of the park’s 27 miles of hiking trails.

Sliding Sands Trail descends 1,400 feet into the summit’s so-called crater—actually an erosional valley amid a colorful cinder desert of sorts. With clouds rapidly closing in on us during the first few miles, we catch varied glimpses of the volcano’s red-and-orange tinged slopes, some studded with rare Haleakalā silversword plants.

“It’s incredible. It’s like being on another planet,” says a hiker in our group, excitedly. Echoing the sentiment, others marvel at the valley’s otherworldly beauty.

Our chatter soon fades. When the only sound I’m aware of is the crunch of porous cinder under my footsteps, Thorup directs us to take note of the beautiful silence.

“If you can get past the noise in your own head. If you can quiet your mind. You can feel the sound,” he says, of the almost aching quietude of Haleakala’s wilderness area. While stashing my reporter’s notebook to give this a try, I feel a few drops of rain. Minutes later, we’re engulfed by dark clouds and getting soaked. 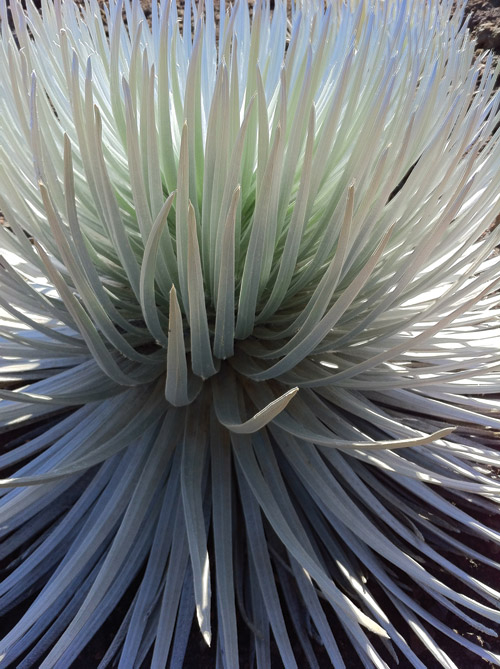 Equipped with a generous supply of Hike Maui rain ponchos and warm jackets, we double-check our gear and continue on to our halfway point, a cinder cone dubbed Puu o Pele (Hill of Pele), named for the Hawaiian goddess of volcanoes. The view from here on a clear day is breathtaking, but no one complains about the blanket of cloud and mist blocking our vistas today. Instead, we enjoy a slightly spooky trek around the pu‘u rim, observing wispy clouds slipping over the path.

It’s late afternoon when we retrace our steps and finish the climb back to our summit starting point. Piling back into the van, we peel off soggy jackets and tear into Hike Maui’s stash of hearty snacks, which includes tasty, locally baked banana bread. Comparing our hike snapshots, we do not have many that are postcard-perfect. What we do have, though, are still-vivid memories of a fascinating outdoor experience. (“Experience” being Thorup’s favorite one-word description of the hike.)

Thorup says he is always hopeful that hikers “take away a desire to care for our beautiful planet” from their experience of Haleakala. I hope they do, too.

On the drive back to Kahului, the clouds lift and we spot a double rainbow. Now, convinced that I’m not a weather wimp after all, I promise myself a return visit to experience more of whatever the enchanting and ever-changing slopes of Haleakala have to offer.

(This feature was originally published in the January/February 2013 issue of HAWAII Magazine.)
Categories: Maui