Dancing with Rays: An Evening Snorkel with Mantas in Kona, Hawaii Island

Watching the massive manta rays' fantastical displays is something many people consider a once-in-a-lifetime experience.

A cosmos of plankton swirls near my face as I breathe through my snorkel, making sounds not unlike Darth Vader. Tiny orange shrimp, just-hatched, staple-sized translucent larval fish and green algal blobs dance in front of my mask, all driven by internal instinct to the surface by a spotlight facing the seafloor. Beyond, blackness is everywhere. There’s something both comforting and unsettling about the penetrating light, which allows me, floating on the ocean’s surface, to just make out coral and lava rock amid the white sand some 30 feet below. Like an underwater campfire, the light hones my focus, and that of the tiny sea critters; they’re attracted like moths to a flame, and I’m watching their emberlike dance, simultaneously mesmerized and terrified.

It takes a special kind of person to hop on a boat and slip into the ocean at a time when all other reasonable people are finishing dinner or watching primetime TV. Yet, in the waters off Kailua-Kona, upwards of 80,000 people test their comfort zones in exactly this way each year. Their reward is an all-but-guaranteed front-row seat to an underwater ballet: black and white manta rays, many as long as a basketball hoop is high, somersaulting through the water to feed.

My father and I had boarded the long, white van from Jack’s Diving Locker downtown for expressly this purpose about an hour earlier. If Dad was nervous then, he didn’t show it. Visiting Hawaii Island for the first time, he was eager to see and learn everything about my new island home, even if it meant doing something everyone else said, “No way!” to. Wedged in the back, we rolled our eyes at our snorkel guide’s Spero Soros’ overt attempts to lighten the group’s mood: “What do you call an alligator with a GPS?” Silence. “A navigator.” More silence.

At the harbor, the grey sky unleashed a drizzle, obscuring our chances of a colorful sunset, and we rode the chop aboard the Na Pali Kai from Honokohau Marina south to Keauhou Bay. This, we were told, was one of two popular places the mantas congregate nightly.

Revered by some Native Hawaiians as aumakua (family or personal gods), mantas have been frequenting Keauhou Bay’s nutrient-rich waters for eons. Still, mantas remained largely mysterious until about 30 years ago. A few brave nighttime scuba divers began to notice the mantas regularly congregating off the coast to filter-feed on plankton and they started to pay attention to the mantas’ behaviors and patterning.

In the early ’90s, one of the divers realized the dark patterns on the mantas’ white undersides seemed to be unique, like human fingerprints, and launched a manta ray identification project. As word of Kona’s majestic mantas has raced around the world, plentiful visitor photographs have helped document the comings and goings of the area’s more than 200 named mantas. To sweeten the pot, if you snap a new pattern, you earn naming rights. Regularly spotted and easily identifiable mantas include Righty, whose right cephalic fin—the forward facing flap that funnels plankton into its gaping mouth—was damaged by errant fishing wire, and Koie, whose left cephalic fin is missing a chunk. Other more inventively named mantas include Rachel Ray, Death Ray and Ray of Hope. 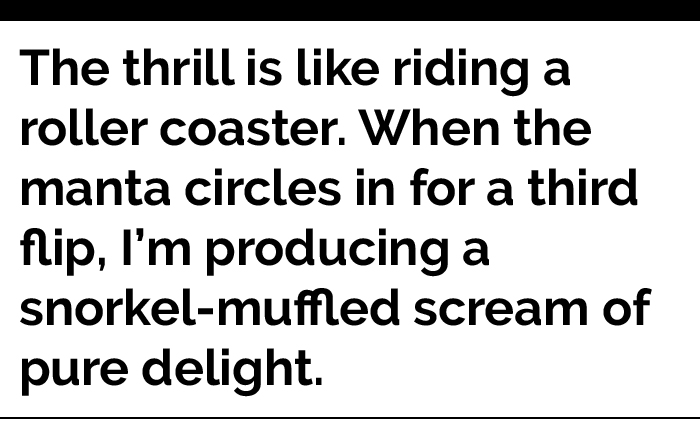 As we don our buoyant wetsuits, Soros’ fellow snorkel guide, Katie D’Innocenzo, gives us a briefing. “Mantas are not stingrays, their tails won’t hurt you,” she says. “They are cartilaginous and are related to sharks, but the only teeth they have is like a strip of sandpaper at the back of their mouths.”

Mantas, she explains, are filter feeders and will be attracted to the plankton that are in turn attracted to our spotlight-affixed flotation boards. They eat 10 to 12 percent of their body weight per week, a sizeable sum considering how small those plankton are (less than a millimeter) and how large mantas are (adult wings span 10 to 12 feet on average). Weighing an estimated 50 to 100 pounds per square foot of manta, that percentage equates to at least 50 pounds of specks per week for adults.

We learn that two species of manta rays inhabit Kona’s waters: the rarer pelagic Manta birostris and the most often seen Manta alfredi. We’re also taught how to identify male from female, and how to pronounce “ovoviviparous” (oh-voh-vie-vyp-a-rus)—a word that describes mantas’ reproductive method of hatching an egg internally and giving birth to live young. “They come out all rolled up like a 3-foot-long burrito,” says D’Innocenzo.

Just after nightfall, light sticks are affixed to our masks so we can easily be spotted in the water. With a few final commonsense reminders—“Don’t stick your GoPro into the manta’s mouth” and “Don’t touch or kick the mantas”—Dad and I take giant strides into the inky sea.

Water laps at the sides of nearby boats and colorful lights indicate their presence around us on the horizon. At least 20 other groups clinging to handles on “light boards,” constructed similarly to ours, peer through conical pockets of pale green light penetrating the darkness.

I lie on the surface and look down. Giddy and nervous while we watch for shadows, I glance behind me but there is nothing to see. “Where are they?” I ask through my snorkel, more out of nervousness than anything. “I dunno,” comes Dad’s snorkel-muffled response. I keep looking toward my feet, but there’s nothing there. So, I focus on the planktons’ dance. Silvery fish begin to materialize, eating up the free feast.

“What do you call an alligator in a vest?” questions Soros from across the board. I am relieved it’s not a shark joke. “An investigator!” he answers, perhaps too quickly. I think I hear Dad sigh.

Just then, snorkelers to our right emit muffled squeals. Knowing this couldn’t possibly be a reaction to Soros, I look in their direction just in time to spot a 6-foot manta gliding in our direction 10 feet below. Its cephalic fins are coiled; he’s not eating, just cruising. A few minutes later, another drifts past far below and just barely visible. I squirm.

I’m beginning to think the spectacular feeding flips we’d heard about might not be in the cards given the sheer volume of visitors tonight, when, as if on cue, I spot a massive, white, deeply grooved mouth some 15 feet down. With a single flick from its pointy pectoral fin, the manta veers upward with alarming speed. It looks as though it’s going to ram our light board cephalic fins first. I let out a childlike shriek as it turns back toward the seafloor, so close I can feel a thin cushion of water form a current between its body and mine before it plummets. “Whoa!” says Soros. Dad chuckles.

The thrill is like riding a roller coaster. On the manta’s second loop, I pay more attention. I see the dark patterning on its underbelly and note that she’s female. She is so massive her body not only graces mine, but Dad’s and my neighbor’s as well—she dwarfs our light board. “That’s Big Bertha,” says Soros. “She’s the biggest manta out here!” When she circles in for a third flip, I’m still producing a snorkel-muffled scream of pure delight. As quickly as she came, she’s gone like a stealth bomber into the night. Our plankton cloud is noticeably thinned.

I lift my head out of the water and, suddenly self-conscious of my screams, meet the eyes of a fellow snorkeler. He nods knowingly. No one seems to mind. Someone else says, “So … that just happened.” We return to waiting.

Three more close encounters and multiple cruise-throughs later, it’s time to depart. As I reluctantly climb aboard the Na Pali Kai’s ladder shivering—more from adrenaline than from cold—I can’t stop smiling. “That was incredible,” says Dad. We huddle in towels and hunker down for the bumpy ride home. And, for the first time, no one can help but laugh at Soros’ jokes.