It may be the world’s first resort to incorporate a working taro loi, water slides erupting from a faux volcano, and Disney characters doing the backstroke in its pool. Not to mention steel roof designs that look like pili grass hale.

The resort will include 350 hotel rooms and 480 vacation villas, the latter dedicated to Disney Vacation Club timeshare members. Plus an 18,000 square-foot spa, 8,000 square feet of convention and banquet space, two restaurants, a kids club and a wedding lawn. Water features include an inland saltwater lagoon, quiet pool and a water park with slides, rapids and waterfalls. The resort also claims one of the crescent lagoons along the Ko Olina shoreline.

Disney plans to market toward luxury family travel. The company declined to reveal the project’s cost and room pricing. Renderings of timeshare units and hotel rooms were not available.

“There are always economic ups and downs. We have confidence in Hawaii as a continued family tourist destination for the long-term,” said Walt Disney Parks & Resorts chairman Jay Rasulo.

Disney first announced the project in October 2007, after purchasing the 21-acre Ko Olina property the resort will occupy. The Hawaii resort will be the largest of three Disney Vacation Club properties, and the first to combine hotel and timeshare offerings. The family-travel-oriented Disney Vacation Club claims more than 350,000 members worldwide.

“We ask our Disney Vacation club family members all the time, ‘Where do you think you would like your next home?’ And every time, Hawaii always stacks up in the Top 5,” said Djuan Rivers, vice president of Disney Vacation Club Resort Hawaii.

UPDATE, 3/6/2009: Construction has begun. Here’s a recent photo of the oceanside site. 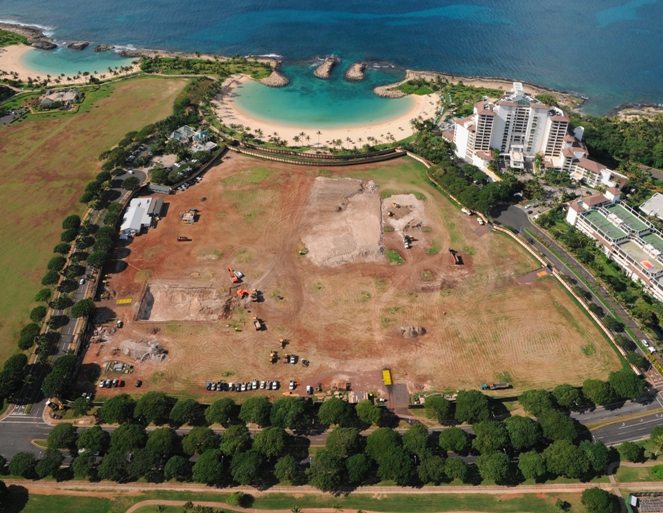