Pull your telescope out of the closet, there’s a new dwarf planet in the skies. And it’s been given a Hawaiian name, Haumea, after the Hawaiian goddess of fertility.

The International Astronomical Union just made it official. Discovered in 2005, the astronomical entity was classified as a dwarf planet only days ago.

Just what is a dwarf planet? Basically, it is a celestial body that orbits around the Sun. It has sufficient mass that its gravity makes it rounded, but it is not gravitationally dominant in its own region of outer space.

Haumea is our solar system’s fifth dwarf planet (the others are Ceres, Eris, Makemake and recently demoted Pluto is another). Haumea is roughly one-third the mass of Pluto. 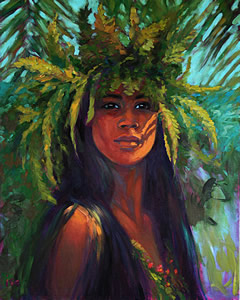 The name was proposed by the researchers who discovered it —Mike Brown of CalTech, David Rabinowitz of Yale, and Chad Trujillo of Gemini Observatory in Hawaii).

According to myth, Haumea’s children were created from different parts of her body. Similarly, the moons of the dwarf planet were believed to have been broken off its body by an ancient collision.

Coincidentally, the goddess Haumea was a personification of stone, and her namesake planet is believed to be made almost entirely of rock.

Haumea also has the distinction of being one of the few non-spherical planets in our solar system, resembling a football or perhaps a plump cigar. Astronomers think its shape comes from its rapid rotation, possibly the result of a collision with another object billions of years ago.