From Stilettos to Slippers

How the Boys & Girls Club changed the recipe and found a winner.

Honolulu may sport more slippers than stilettos, but when it comes to the annual social calendar, big-name events in Palm Beach and Bel Air have nothing on us.

Rhinestones and taffeta steal the show at the Heart Ball, an event that’s been raising money for the Heart Association of Hawaii for 40 years. Devotees count on big names, big entertainment, and a big wads of cash every year as they dance away the night in the glitziest ballrooms in town.

The Wish! Gala, benefiting keiki with life-threatening illnesses through the Hawaii Make a Wish Foundation, ensures a run on all things white in the weeks before the event. While the theme may change from year to year, the dress code is decidedly pure white, adding to the magical atmosphere of what’s possible when a wish is made and you make it come true.

Come Halloween, the GIFT Foundation’s themed and costumed soiree takes top billing. Since its debut in 2003 under the stars at the Pacific Club—where rumor has it that the merriment and revelry caused the club to suggest the foundation find a new venue the following year—this event’s committed team of young professional volunteers guarantees a great time for great causes (and almost certainly great stories for the months that follow).

But one signature event eschews the stilettos, taffeta and rhinestones, choosing the country’s quiet beauty over city ballrooms and twinkly lights. For this one, it’s rubber slippers, walking shorts, your best sunglasses and that kicked-back attitude that comes with a potluck at your auntie’s house. 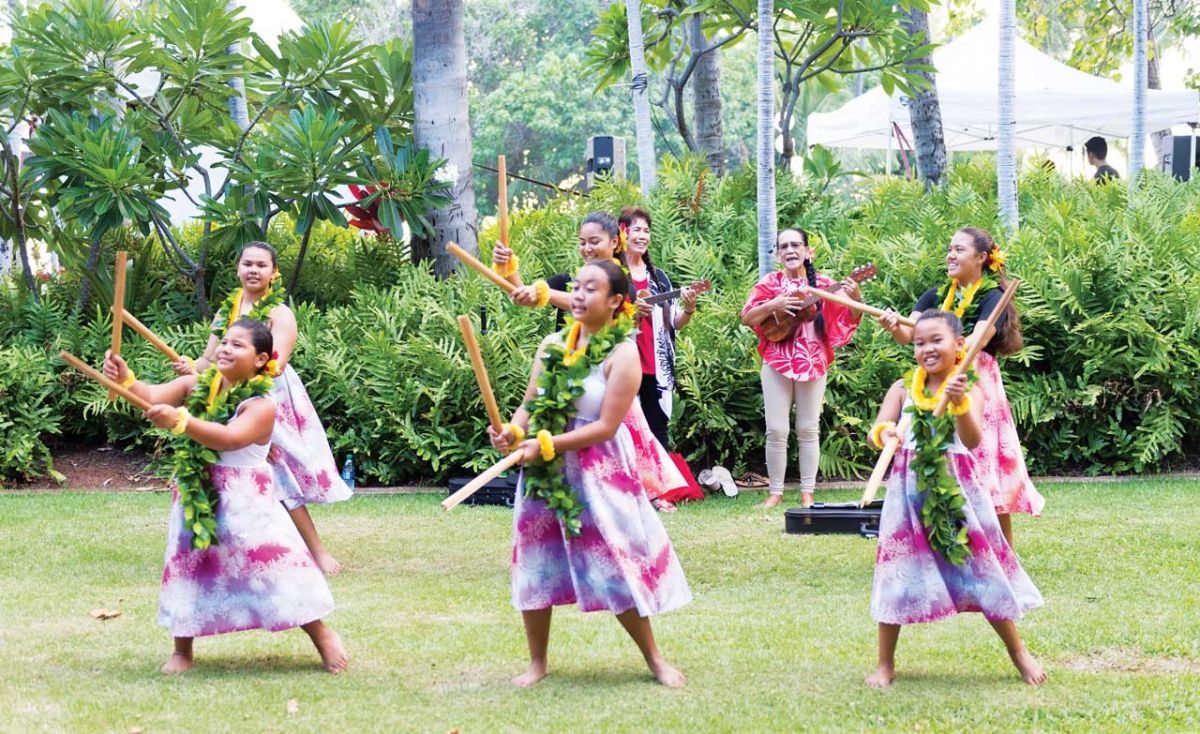 Walk in the Country, the Boys & Girls Club of Hawaii’s signature event for more than two decades, counts on the natural beauty of Leeward Oahu’s Lanikuhonua and the good vibes that come with comfortable shoes to bring people out year after year. It works.

“Back then, nobody would drive past Aloha Stadium,” laughs Suzy Churchill, a longtime BGCH board member and one of the event’s founders. “People thought we were crazy!” But she and her fellow board member and instigator, Sharon Fairbanks, got the last laugh.

“I think they’d figured out that it was virtually impossible to get their husbands to get dressed up and go to another fancy dinner,” says David Nakada, a longtime executive director, now retired. “But the thought of driving to Ko Olina! I couldn’t wrap my head around it!”

Churchill and Fairbanks persisted, however, getting a commitment from the property and enticing local artists to showcase their works and to talk-story with the guests. “We started calling them the Pointer Sisters,” Nakada says, remembering the two women showing up at board meetings, selling members on the event and pointing at different people, telling them why it would work and what each of them would do to ensure it.

Nakada laughs when he says he’s pretty sure board members weren’t sold on this new and “out-there” idea—they just knew better than to argue with Fairbanks and Churchill. “You tell us what to do and we’ll do it,” Nakada remembers board members telling the two women. “‘We don’t get it, but we’ll do it.’” 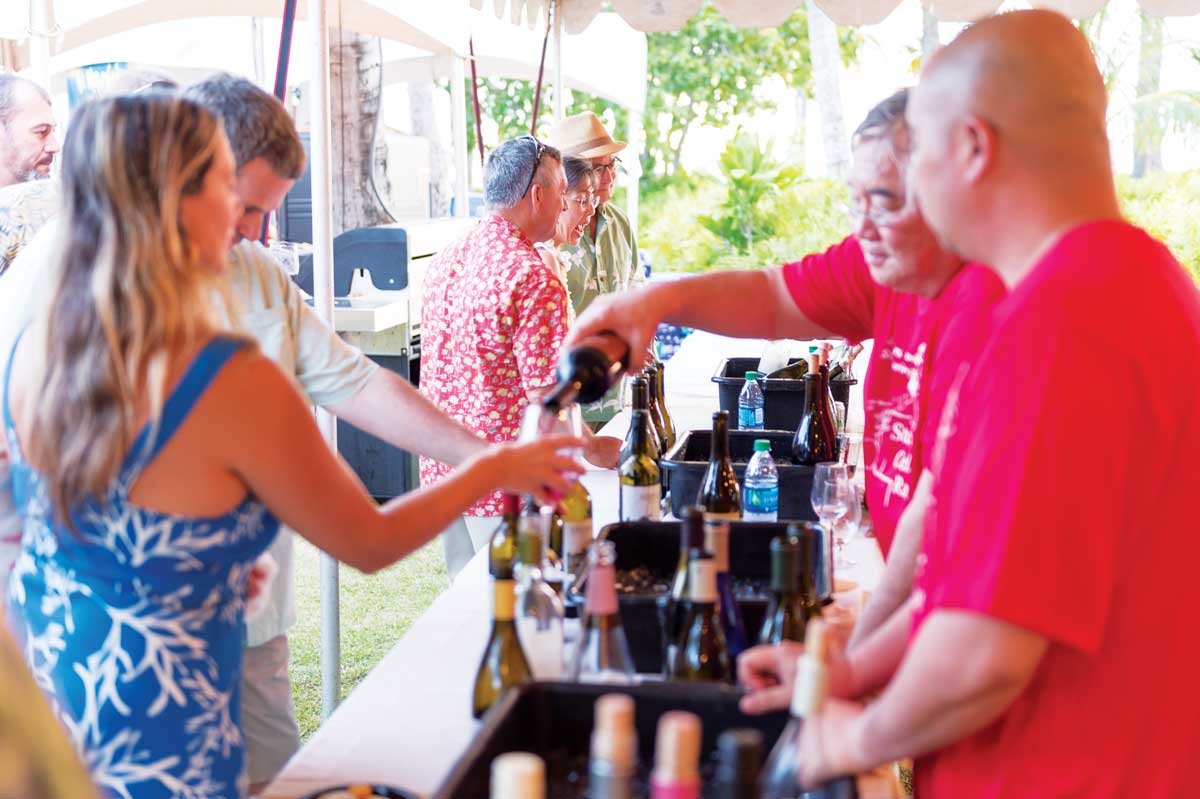 Attending the event now, where all elements seem perfectly orchestrated and the vibe so perfectly relaxing, it’s hard to imagine the chaos that got it off the ground. Or that it took much to make it happen in the first place. “After the first one,” Nakada says, “it was an easy sell.”

For Churchill and Fairbanks, one of the perks was staying overnight at Ko Olina, the only hotel on the coast at the time, and not having to drive back to town. But nobody thought about all that money. “We didn’t think about the need for a night deposit,” Nakada recalls, “or what we’d do with all the proceeds when the night ended.” When everything wrapped up, the two women looked at the bags with all the money stuffed in them and did what any self-reliant woman would do: They took the bags back to their hotel room and stuffed them under the mattress.

Nakada laughs, remembering the two of them at the next board meeting, recounting how it was the most frightening night of their lives, some $100,000-plus in proceeds, much of it cash, stuffed under their mattresses, doors locked and chained, neither of them getting much sleep. The next year, they remembered to make better plans.

Over the years, board members started bringing their young children, and as the kids grew older, they’d show up early and help with the setup. “I’ve watched these kids grow up because of Walk in the Country,” Nakada says. But even including kids was a lively debate, he adds, because kids and the gala circuit don’t usually go hand in hand. “But this is family, it’s a backyard, it’s different,” he says with a laugh, and soon, kids were as much a part of the vibe as the comfortable shoes and killer sunsets.

While today the dress code is permanently set, those early visionaries laugh about the struggle to get to this point. Despite strict instructions from Churchill and Fairbanks, many of the board members had a tough time convincing their wives they were supposed to wear slippers and shorts to a fundraiser. Nakada recalls one guy showing up in his dress slacks and aloha shirt, only to return to his car, retrieve his shorts and slippers and change, right on the spot. “His wife didn’t believe him,” Nakada says with a laugh, “so he stashed his comfortable clothes in the car and changed on-site, while his wife was overdressed all night.”

After 35 years as BGCH executive director, Nakada retired in 2011, turning the reins over to the new president and CEO, Tim Motts. While Churchill and Fairbanks still sound off at board members from time to time, they, too, have stepped off the board to make room for new ideas, new generations. But Walk in the Country lives on, the “backyard casual” event known for its good food, good friends and ever-lasting commitment to the works done at Boys and Girls Club clubhouses across the state.

Now, Nakada spends most of his time surfing, still reveling in the notion that he can catch early morning waves on the North Shore and not have to race back to town for a meeting. But he stills drives past Aloha Stadium to attend the annual event. “You get out there, see that sunset, enjoy friends and a cocktail, it’s so casual—it’s like somebody’s backyard,” he says. “You forget about the drive.”

That drive—not the 21 miles from the stadium to Ko Olina, but the one that motivated those “Pointer Sisters” to try something so different—is the magic of Hawaii’s nonprofit sector. Passionate, dedicated and determined, generations of volunteers make it happen year after year, raising the money, raising the bar, and sometimes even finding a way to do it all in slippers.