My guide for the afternoon, Patrick, smiles as he asks the question, watching me poke at a mound of dark green sand in the palm of my hand. We’re standing on a smallish patch of the stuff washed up by waves onto lava rock, somewhere between Ka Lae, the geographic southernmost point of the Big Island, Hawaii and the United States, and Papakolea, a larger, more famous, and more remote, green sand beach that is our final destination.

The granules I hold are larger and coarser than the fine white sands of beaches on the island’s west side South Kohala Coast, and black sands of the east side’s Hilo Bay. The bright sun giving them a lovely luminescence, the sand crystals in my palm gleam in the light like miniscule, uncut olive diamonds.

I drop the sand back where I found it and Patrick and I hop into his road-beaten, salt-air-rusted pick-up truck. The vehicle groans disapprovingly as he shifts it into four-wheel-drive mode and begins heading north on a  series of crisscrossing coastal dirt roads hugging the coastline.

Papakolea “Green Sand” Beach isn’t easy to get to. Once you negotiate the 20-mile, single-lane South Point Road to its car-rattling asphalt conclusion at Ka Lae peninsula (“the point” in Hawaiian), there’s a three-mile, moderately strenuous hike to Papakolea over dry, windswept coastal grasslands and dirt dunes to contend with. Always keep the coastline in  sight and you’ll definitely find the beach; but the hike can still prove tough on folks unfamiliar with the topography of the area. Loose dirt particles from the dunes are ever swirling in the strong tradewinds. And blazed by ATVs and off-road vehicles, those aforementioned crisscrossing roads can be confusing and labyrinthine.
Patrick is one of a dozen or so South Kona residents who gather daily at Ka Lae to offer rides to-and-from Papakolea, for a fee, to folks unwilling or without time to hike. It’s a clever venture and Patrick is one of its more enterprising guides. Instead of setting a fee, as several other guides do on stenciled signs attached to their weather-beaten vehicles, Patrick tells me I can pay him whatever I wish at the end of my round trip. Easygoing, friendly and patient, Patrick often ends up with twice what other guides pre-set as their fee.

(Note: Since the Papakolea guide-business is unregulated and unapproved by the state, we are not revealing Patrick’s surname.) 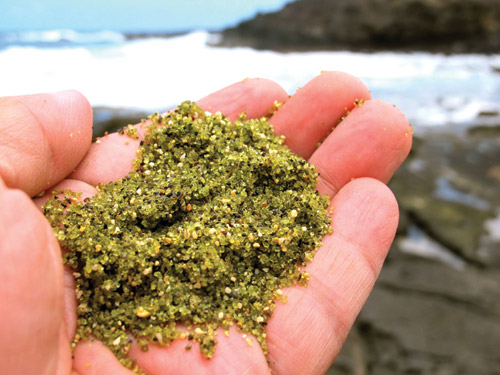 A handful of green sand shines in the afternoon sunlight. Photo by Derek Paiva.

The ride on the ruddy, rock-strewn dune roads to Papakolea is rough and tumble. But after hundreds of trips on them, Patrick negotiates the roads like a pro, taking the smoothest and shortest possible route. Along the way, we pass the stone foundations of long ago settlements perched along a natural border where dirt dunes meet sea cliffs. A National Historic Landmark District since 1962, Ka Lae is believed to have been settled by ocean voyagers from the Marquesas Islands, more than 2,000 miles southeast of Hawaii, as early as 124 A.D.

I begin to see the promontory of the 49,000-year-old collapsed cinder cone Puu Mahana, which looms sentinel-like over Papakolea’s north end, about a quarter-mile before we reach the beach overlook. Papakolea and its scenic crescent bay were likely created by millennia of ocean waves wearing and ultimately breaking down Puu Mahana. The green sands that inspired Papakolea’s English name are olivine crystals, a silicate mineral element that forms as Hawaiian magma cools. (Papa kolea translates to “plover flats” in Hawaiian, referencing the Pacific golden plover, which the Ka Lae area attracts seasonally.) The beach is one of only four stretches of green sand in the world, the others being found in the Galapagos Islands, Norway and Guam.

The view of Papakolea and Puu Mahana from the overlook is uniquely breathtaking. Up close, Puu Mahana’s eons of geologic evolution are revealed via layers of hardened volcanic sediment from multiple lava flows and eruptions—the last of these occurring roughly 10,000 years ago. Standing a couple hundred feet above Papakōlea, I watch deep blue ocean water turn teal within the bay before crashing gently on the black, brown and green-tinted sand.

A two-minute foot-trail descends from the overlook to the beach, where I quickly scoop up a handful of sand to compare with my last one further south. My first impression? The granules aren’t as gleamingly green. Mixed with brown dirt and black sand, the green sand doesn’t show as luminescent close up unless one digs a bit under the beach surface. When I do, I find the sands’ green hue almost as impressive as I did my handful earlier in the day. 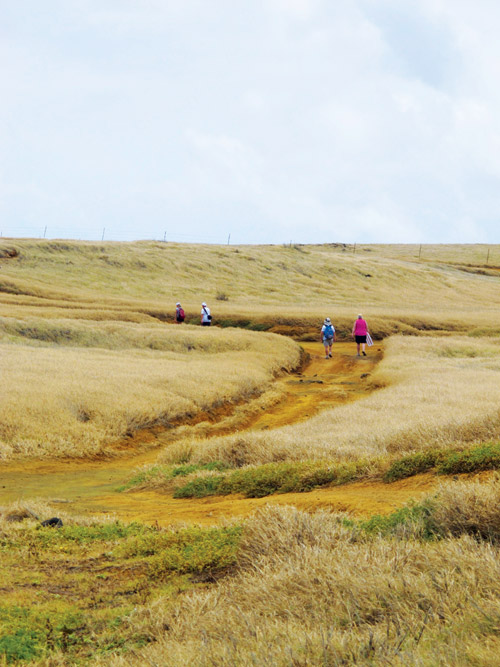 I spend a couple of hours at Papakolea exploring its strikingly dissimilar, boulder-strewn southern end and watching people wade in waters a few yards off the beach, which is not recommended for swimming. Burrowing my feet deep into the sand, I marvel at the contrast of the bay’s turquoise waters against green-flecked Papakolea sand. It’s a unique and altogether cool sight.

Having given Patrick a set time to meet me back here, I find him waiting at the overlook after I climb to the top, gazing at the bay and beach. Puu Mahana’s slow but constant erosion into the ocean is expected to replenish Papakolea’s olivine sands until the last of the cinder cone’s green mineral crystals is swept out to sea, perhaps thousands of years from now.

“Pretty rad, yeah?” asks Patrick, still gazing at the view, still in awe of it.