If you happen to be in the Islands tomorrow, you’ll be in one of the best places on the planet to witness a rare celestial alignment, during which Venus passes between the Earth and Sun.

The planet’s trek across the disk of the Sun — known as a transit of Venus — will be under way on Tues., June 5, between 12:09 p.m. and 6:46 p.m. Hawaii Standard Time. Chances are you’ll want to strap on a pair “solar viewers” — sunglasses alone do not provide enough eye protection — and check out the black-dot silhouette (Venus) crossing the bright face of the Sun as it won’t transit again until 2117.

Transits of Venus occur in pairs eight years apart.  The “twin” of the 2012 transit occurred in June 2004.  But that transit occurred after sunset in the Islands, so we missed it entirely. This time around, Hawaii and Alaska will be the only places in the United States where you’ll be able to see the transit in its entirety.

Over the last few centuries, transits have played an important role in helping scientists examine the size of the solar system.

According to transit information provided by Imiloa Astronomy Center of Hawaii, part of the University of Hawaii at Hilo, there have been 53 transits of Venus across the Sun between 2000 B.C and 2004 A.D. The first eyewitness account of a transit by Venus dates back to 1631. 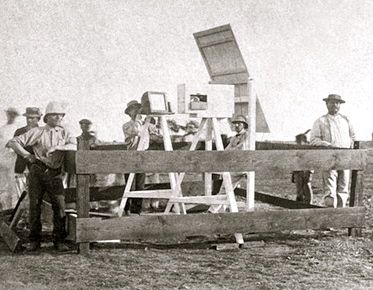 The Institute for Astronomy at the University of Hawaii at Manoa provided the following information about Hawaii history tied to the transit occurrence.

“In Hawaii, this event has a special historical significance, for it echoes a transit of Venus that occurred during the reign of King David Kalakaua. On Dec. 8, 1874, a British expedition made the first scientific astronomical observations in Hawaii (pictured, above) by observing the transit from a site near the corner of Punchbowl and Queen Streets in Honolulu, as well as from locations in Waimea on Kauai and Kailua-Kona on Hawaii. They observed the transit to gather data that would be used to determine the precise distance between Earth and the sun, and thereby, to measure the size of the solar system.”

The Institute for Astronomy will be distributing solar-viewing eyewear and holding events from noon until sunset at Waikiki Beach, the Pacific Aviation Museum, Ko Olina and at the institute’s headquarters in Manoa. For details about the events, click here. Also on Oahu, the Bishop Museum will host a Transit of Venus Festival, complete with volunteers from the Hawaiian Astronomical Society to assist festivalgoers with viewings; special planetarium programs; and talks about Venus given by Hawaii astronomers. For more information about the festival, click here.