About five miles northeast of the historic Haleiwa town on Oahu’s North Shore, on the grounds of Kawailoa Plantation, construction of Hawaii’s latest clean-energy effort is completed and commercial operations are under way.

At full output, the 69 megawatt Kawailoa Wind project has the potential to meet up to 10 percent of Oahu’s annual electrical demand and thereby avoid the annual burning of some 300,000 barrels of oil.

Schatz added, “We should all be pleased and proud that we are making good progress towards more affordable, sustainable energy. We’ve got more work to do, but this is an important moment in our efforts towards a clean energy future.” 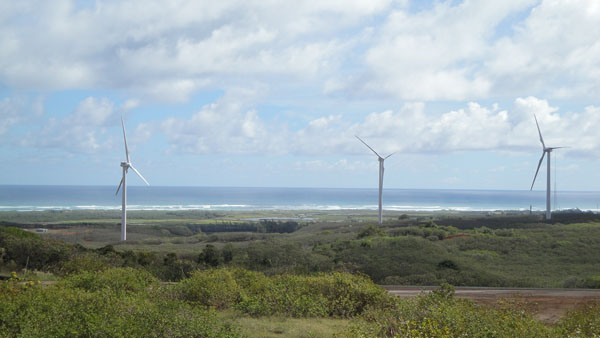 First Wind CEO Paul Gaynor said: “We are proud to complete work on our Kawailoa Wind project, which represents our fourth project in Hawaii to achieve commercial operations over a six-year period.”

The other projects include: Kaheawa Wind (two projects) located in West Maui (total: 51 megawatts, 34 wind turbines); and Kahuku Wind, also on Oahu’s North Shore (30 megawatts, 12 turbines). When the Kaheawa project started generating wind energy in 2006, its commercial operations were the first of its kind nationwide.