The crew of Polynesian double-hulled voyaging canoe Hokulea and its sister tech support canoe, Hikianalia are hoping to sail on the first international leg of a historic and ambitious three-year worldwide voyage tomorrow (May 30).

Pending weather conditions, the two voyaging canoes will depart Hilo on the Big Island, where they have been docked for the last week, and sail south to Tahiti on Friday.  The crew had originally planned to leave on the 2,600-mile leg to Tahiti last Saturday. Light tradewinds approaching from the wrong direction were the reason for the delay

There are no public or media events planned for the day of departure. 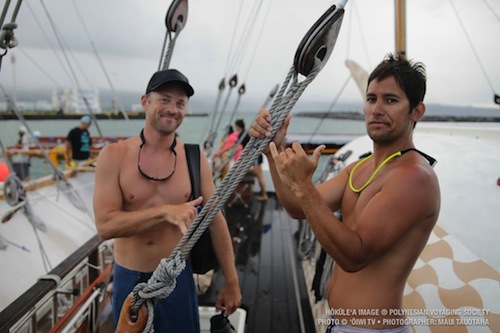 The 26-member crew has been resting and preparing for the long voyage ahead.

This trip to Tahiti will be the first international leg of the Polynesian Voyaging Society’s ambitious Malama Honua (“Care For Our Earth”) Worldwide Voyage for Hokulea and Hikianalia. The full voyage calls for stops in 85 ports and 26 countries, including 12 of UNESCO’s Marine World Heritage sites, through June 2017, during which crew members will connect with schoolchildren, educators, indigenous groups and others to exchange future-focused ideas and practices linked to environmental sustainability. The two canoes will cover more than 46,000 nautical miles.

The voyage’s first stop, Tahiti, was where Hokulea finished her first trans-Pacific voyage in 1976.

The 62-foot by 20-foot Hokulea accommodates up to 14 voyagers, while the slightly larger Hikianalia can sail with up to 16 crewmembers. Neither uses fossil fuels. Both rely on wind in the sails and photovoltaics for their lights, communications and, in Hikianalia’s case, engines.

During the worldwide voyage, no single crewmember will be on board Hokulea for more than 30 consecutive days without taking a break. By the time the canoe completes its planned circumnavigation of the globe, an estimated 400 crew members from a total of 16 different countries will have sailed on the vessel. The crew will consist of navigators, students, educators, scientists, documentarians, medics, and cultural leaders, including some of the voyaging society’s early members who are now in their 60s. 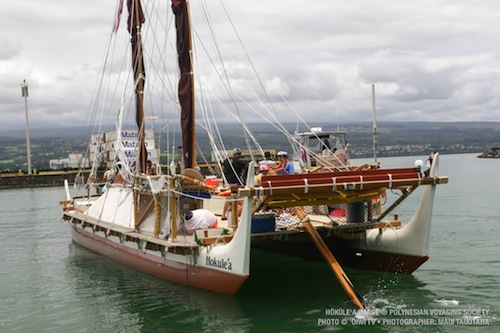 Founded in the early 1970s, the Hawaii-based Polynesian Voyaging Society’s early members set out to address unanswered questions about how Early Polynesians made their way to Hawai‘i and other far-flung islands in the Pacific Ocean.

To date, Hokulea has sailed by way of traditional voyaging more than 135,000 miles of Pacific Ocean, traveling to the corners of the Polynesian Triangle as well as to the U.S. Mainland’s West Coast and Alaska, Japan and Micronesia, and other areas. The worldwide voyage will mark the voyaging canoe’s first venture into other oceans.