We talk to restaurants serving the Hawaiian dish, from LA to London, about how they’re adding their own innovative spin and regional flair.

The small restaurant in New York was supposed to be a burger and sandwich joint. But when the utilities company took forever to turn the gas on, Sons of Thunder decided: When life gives you a cold stove, you make poke.

So, in October 2015, faced with raw tuna that was originally destined for tuna steak sandwiches, it started serving poke, Hawaii’s beloved raw-fish dish.

“We almost closed because no one knew what poke was,” says James Kim, a partner in Sons of Thunder.

What a difference a New York Times article makes. Four months after Sons of Thunder opened, Ligaya Mishan, a Times restaurant critic originally from Honolulu, named the spot as the best place for poke in Manhattan. Kim went from correcting people’s pronunciation (it’s poh-kay) and explaining what it was (most commonly, chopped raw fish seasoned with shoyu and sesame oil) to serving more than 600 poke fans a day. Sons of Thunder’s blue-and-white logo is still a burger, but Kim has long given up on that idea. As much as he tries to push other items, the people just want poke.

Since Sons of Thunder first opened, at least half-a-dozen new poke spots have sprung up in New York. But New York isn’t the only city now enamored with poke. It’s exploding in popularity around the world, proliferating in cities from Los Angeles to London to Sydney. Poke puns abound in Canada, where a shop near Toronto is named Pokeh, and poke is even trés chic in Paris. So how did Hawaii’s most popular pupu (appetizer) suddenly become one of the biggest food trends of the year?

Poke has always existed where there are pockets of homesick Hawaii transplants. Take Takahashi Market in San Mateo, California. Originally a Japanese general store, it started catering to Hawaii transplants who came to work on the San Francisco airport in the late ’50s. Since then, Takahashi Market has sold Hawaii comfort foods such as poi, laulau, Zippy’s chili and poke, made with limu (seaweed) brought in from the Islands.

But this new wave of poke on the mainland is something different. Sons of Thunder may have accidentally tapped into the zeitgeist, but for the poke chains really driving the trend, it was conscious capitalization from the start.

For the entrepreneur, poke perfectly captures three of our current obsessions: Hawaii, fast-casual dining and healthy food. Hawaii is suddenly hot: witness the rise of Hawaii-themed restaurants, modern aloha prints and visitor arrivals to the Islands, which are at an all-time high. Then, there’s the swell of fast-casual dining, as restaurateurs apply the Chipotle model on concepts from salads to Indian cuisine, and now, poke bowls, where eaters can mix and match bases, sauces and toppings. The third obsession is nothing new, as old as McDonald’s, as pervasive as guilt: the striving for healthy foods … and few things taste as healthy, and yet satisfying, as poke.

Nowhere does this perfect storm of trends come together as powerfully as in Los Angeles. The food website, Eater, recently polled food writers and experts for one word to describe LA’s dining scene—“poke” emerged as the common denominator. Places such as Sweetfin Poké are at the forefront of the trend; Sweetfin opened its first location in April 2015, its second in October 2016 and is planning three new locations in LA for 2017.

“We fell in love with poke on trips to Hawaii and thought that it was so apt for the LA market, given how everyone loves sushi,” says Seth Cohen, one of Sweetfin’s partners. Cohen had sampled poke at Foodland and Da Poke Shack in Kona, the latter which may have also had a hand in the poke boom. In 2014, Yelp named Da Poke Shack as the best place to eat in the U.S., thrusting the tiny takeout counter hidden in a condo complex into the national spotlight, and taking poke along with it.

With Sweetfin, “We are not trying to be traditional in any sense,” says Cohen.

First, there’s the accent on the poke, which Cohen says makes it easier for customers to pronounce correctly. And while most poke in Hawaii is sold by weight and scooped into plastic deli containers for pupu, Sweetfin serves it in a bowl over rice or vegetables to turn it into a more filling meal. It enlisted “Top Chef” contestant Dakota Weiss to come up with the recipes, resulting in a mango albacore poke with ponzu-lime sauce, toppings that include wasabi toasted coconut and pickled shiitake mushrooms and bases like a kale salad and kelp noodle and cucumber slaw. Sweetfin calls its poke “California inspired,” which Cohen interprets as incorporating flavors “from all over the Pacific—predominantly Japan and Hawaii—and also the influence of Californian cuisine and the abundant local produce.” Los Angeles is, after all, where sushi was literally turned inside out and the California roll invented.

Rapidly growing businesses, such as Sweetfin, are sending poke along the highway traveled by other popular fast foods like pizza and tacos—foods brought by immigrants, popularized in America by chains, and evolved away from their original inspiration, resulting in pizza from Domino’s that barely resembles pizza in Italy.

But, in a way, the folding of new influences into poke is how the raw-fish preparation Native Hawaiians used to eat evolved into the poke we know now. Centuries before Western contact, Hawaiians seasoned chopped reef fish with salt and limu harvested from the sea, and sprinkled it with inamona, roasted and crushed kukui nut.

In Hawaii, we still eat inamona- and limu-seasoned poke, usually called Hawaiian or limu poke, but it’s the ahi shoyu poke that’s the most popular, both in the Islands and abroad. This poke offers an abbreviated version of modern Hawaii history. Post-Western contact, chili peppers and onions made their way into the chopped dish. Following the rise of longline fleets plying the Pacific, the bony, nearshore reef fish gave way to deep-sea ahi, now made more accessible. Descendants from the Japanese, Chinese and Korean laborers—brought to work the sugar and pineapple plantations—influenced poke with their own raw-fish traditions and replaced the salt and inamona with shoyu and sesame oil.

But it wasn’t until the ’70s that poke really became popular. Tamashiro Market, a seafood market in Kalihi that offered—and still does—one of the best selections of fish and shellfish in Honolulu was one of the first to offer different varieties of poke in its glass, refrigerated cases. What we now take for granted—poke in every supermarket and even Costco—has only been a thing in the past few decades. 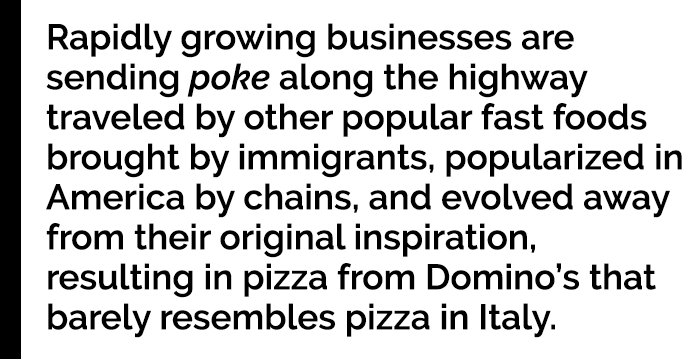 While newer places such as Ono Seafood on Kapahulu Avenue, which opened in 1995, began tossing poke to order and serving it over rice, most locals know poke as the marinated salad we buy by the pound for potlucks and parties. It’s this poke experience that Sweetcatch Poke in New York, which opened its first location in October 2016, and has two more in the works in Manhattan, is hoping to re-create.

Sweetcatch tapped Lee Anne Wong, a chef who splits her time between Honolulu and New York, to design its menu. “I want to bring to New York something similar to what you get in Hawaii,” Wong says. Which means poke sold by weight and marinated poke, unlike other New York spots that season their poke to order. “When you marinate the fish, you’re changing the flavor and the texture,” she says.

Sweetcatch is also like Hawaii seafood counters in that it offers a dozen poke varieties, from a classic Hawaiian shoyu with inamona and ogo to a Korean-style seasoning with sesame leaf, Asian pear and macadamia nuts. Fish include staples such as ahi, albacore and salmon, as well as a catch of the day from Hawaii, which might include opah, kajiki or nairagi. Wong also plans to offer a local seafood poke, envisioning a Long Island steamer clam or Maine lobster poke. And yes, there will be poke bowls. For Wong, it’s a balance between preserving Hawaii’s poke tradition and adapting it for modern times and new tastes.

Kim from Sons of Thunder is mindful of this, too. Sons of Thunder serves only one poke sauce, the typical shoyu-sesame oil, but finds the sweet spot of marination time to be between 10 and 30 minutes. Past that, it takes on a texture that he finds New Yorkers don’t like.

“I know that [Hawaii locals] are not always excited about people doing poke,” Kim says.

Some Islanders have vocalized their disapproval at how some new businesses have misspelled poke, by adding a diacritic on the ‘e.’ Mark Noguchi, a chef in Honolulu, has written about the poke trend as another example of the “commodification of Hawaiian culture, throwing an accent on poke was just another notch in the belt,” Noguchi says. “There are people out there opening poke shops because it’s a trend, but the dish itself is very unique to Hawaii. It has a very strong sense of place … It’s very important to understand Hawaii’s culture and history with food.”

Kim gets that. “As a Korean, I know how it feels when the food is taken and bastardized,” he says. He is not from Hawaii, though his grandparents once lived in Honolulu and he grew up eating raw fish with Korean seasonings and has tasted poke in the Islands. “But, in general, I think I’m appreciative of people doing Korean,” Kim says. “I hope [Hawaii locals] overall think the same way. We’re trying to do the best we can with it.”

Martha Cheng is a food writer based in Honolulu. Her new book, “The Poke Cookbook: The Freshest Way to Eat Fish,” will be published in hardcover on January 24, 2017.