It only took 37 years, $1.3 billion in funds and an immense amount of controversy.

There’s nothing quite like driving from Honolulu to the east side of Oʻahu—especially if you’re using the Interstate H-3. Literally cutting through the Koʻolau Range using a series of tunnels and positioning drivers high above the treeline of Haʻikū Valley, the route reaches its crescendo as commuters come out of the tunnel’s eastern exit and are presented with a jaw-dropping view of Kāneʻohe Bay and Oʻahu’s windward side. Never has keeping your eyes on the road been a harder task. But it’s not like the island was made with an island-crossing highway in mind. Before its opening on Dec. 12, 1997, the Interstate H-3 was the source of decades of planning, $1.3 billion in funds and an immense amount of strife and controversy among the Native Hawaiian community. This is how the Interstate H-3 was made.

Authorized alongside the H-1 and H-2 interstate highways in part of the Statehood Act of 1960—Hawaiʻi technically became a state in 1959 following the overthrow of the Hawaiian monarchy—the H-3 was granted interstate funds—even though it does not actually cross into any other states—due to its designation as a defense highway, linking the centrally located Pearl Harbor to the Marine Base Hawaiʻi in Kāneʻohe. After a cooperative systems planning effort was completed by federal, state and local agencies from 1963 to 1967, it was agreed that the H-3 would go through Moanalua Valley as a six-lane highway with a total construction cost of $250 million. However, things did not go according to plan. 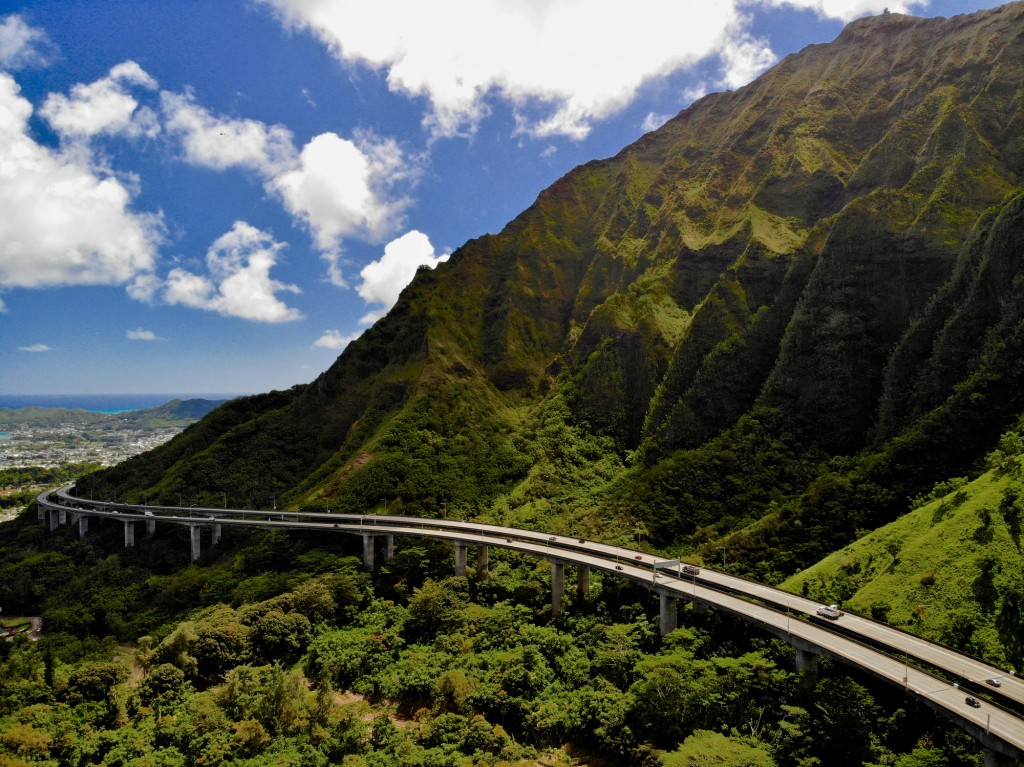 The first major stall in the H-3’s construction was the National Environmental Policy Act, signed into law in 1970 by President Nixon, which made it mandatory for projects such as this to complete an Environmental Impact Study. This would stop construction of the H-3 for years—and environmentalist groups as well as many Native Hawaiians came together to protest against the H-3, which would level sizable amounts of Oʻahu’s forests, with some sections being home to endangered native birds. The Moanalua Valley has also been a culturally significant area for kanaka maoli (Native Hawaiians) for hundreds of years, and there had been records of heiau (sacred temples) and funerary mounds in the valley.

For a period, it didn’t look like the H-3 was going to happen. In 1973, the Damon family—who had inherited large parts of the land in Moanalua Valley—set up the Moanalua Gardens Foundation and submitted an application to the U.S. Department of the Interior and to the Hawaiʻi State Historic Preservation Office to have the area declared a National Historic Landmark. Following a ruling in 1977, which sided with protecting Moanalua Valley as a historic landmark, the H-3 Highway had to find an alternative route—after years of environmental impact studies and papers which, when stacked on top of one another, had reached a height of four feet. After a series of forums to get the public’s opinion, the North Hālawa Valley was chosen to be the highway’s new way forward. 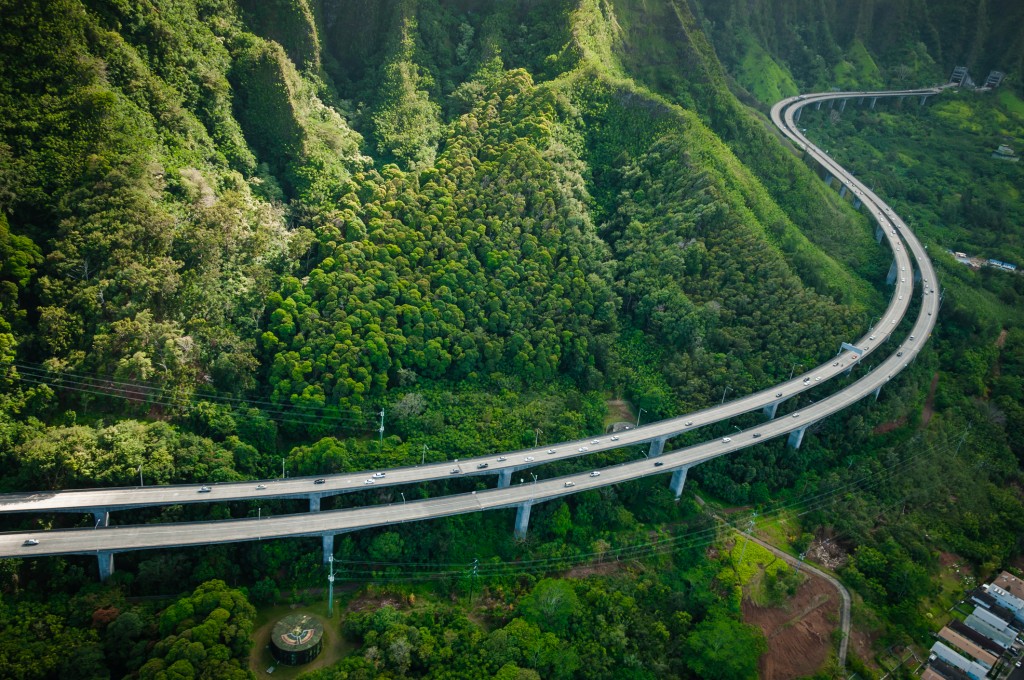 However, the North Hālawa Valley route experienced many of the same problems as Moanalua Valley, with construction in the area having to demolish native forests and plants while also desecrating Native Hawaiian land. This would lead the H-3 to being stuck in a legal quagmire for a handful of years, with Native Hawaiians coming together to form lawsuits against the state and halting construction due to environmental concerns.

Fast forward to 1986, over two decades since the H-3 began its planning, and Senator Daniel K. Inouye makes a significant move. Pushing for the H-3’s construction to be exempt from most environmental laws, the senator found success on September 23, when the U.S. Senate voted in favor of the exemption for the H-3 project as an addition to a Department of Defense budget bill. And in October, President Ronald Reagan signed the bill into law, granting the H-3 its free pass. Moving quickly, The Federal District Court dismissed the Stop H-3 and Office of Hawaiian Affairs lawsuits in 1987, and lifted all injunctions effective June 15 of that year. 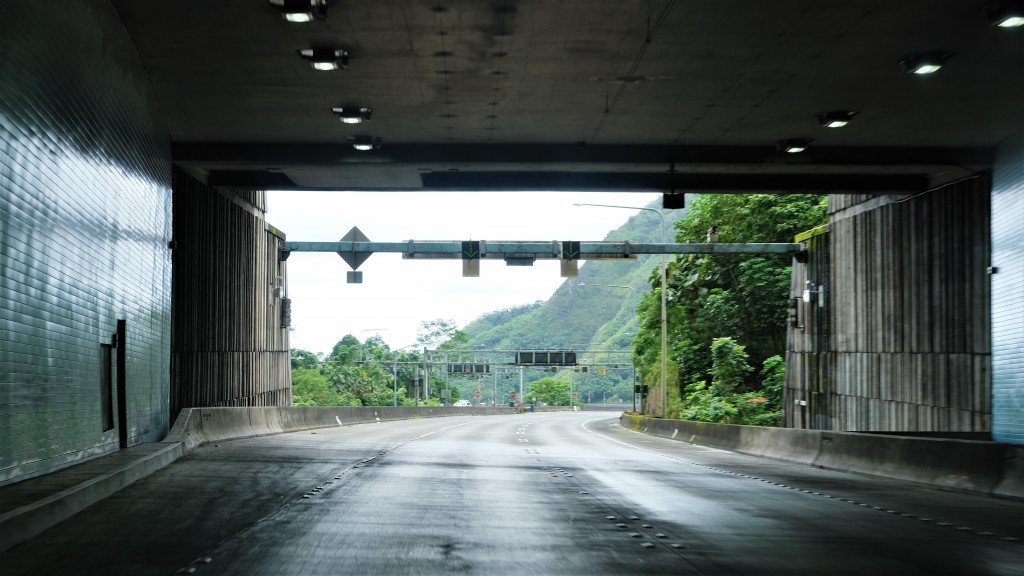 Finally, construction begins through North Hālawa Valley. In an effort to be environmentally-minded, engineers on the project used a variety of eco-conscious construction methods to limit their impact on the native land. Erosion control matting and hydro mulching were used to prevent erosion and promote quick regrowth of native vegetation during construction. The concrete viaducts on both sides of the H-3 were designed with long spans to limit the number of piers necessary to hold the highway up, lessening the disruption on the forests below. But while numerous specialists in fields ranging from botany to archeology and native Hawaiian culture were consulted, many residents and environmentalists still saw the construction of the H-3 as an utter loss of Hawaiian land. A smear on the once pristine Koʻolau Range.

Probably the most impressive feature of the H-3 are its Trans-Koʻolau Tunnels, the longest tunnels in the state of Hawaiʻi—with the Hālawa bound tunnel measuring in at 5,165 feet long and the Kāneʻohe bound tunnel reaching a length of 4,890 feet. Built in a set of six different construction packages costing the state more than $300 million. Engineers actually used an additional exploratory tunnel, located beneath and between the two main tunnels, to estimate the most cost-effective tunneling methods, gauge the water table and find details necessary to build the final tunnels. Using explosives, the excavation of the two tunnels required multiple steps—the initial demolition, lining the tunnels with a temporary meld of welded wire fabric and cement mortar and creating air ports every five feet to provide proper ventilation.

After nearly a decade of construction from 1989 to 1997, the H-3 was completed. Using 27 different construction packages by seven different contractors and four joint ventures, the H-3 had exceeded its original budget by over a billion dollars, and from planning to completion, took 37 years to build. On its opening day, an oli (chant) was performed by the Native Hawaiian group Nation of Kū, who were worried that the highway may be cursed—and ultimately, after a long battle opposing its construction—wanted to make peace. Afterward, a maile lei was untied, to signify the H-3 coming to life, and motorists, busses and commuters took the official “first ride” on the freeway. The entire opening day went just as planned—in fact the freeway opened 30 minutes earlier than scheduled—an ironic moment in the history of one of Hawaiʻi’s most troubled, but beautiful, highways.