Hawaii’s largest winter vacationers are back!

The first humpback whale of the 2013-14 Hawaii whale-watching season was spotted off Maui on Sunday morning and confirmed by the Pacific Whale Foundation, officially kicking off the start of the season.

And right on time, too.

Over the last 15 years, the majority of annual first sightings of migrating humpback whales took place in October, said Greg Kaufman, founder and executive director of the Pacific Whale Foundation, in a news release. One of the earliest appearances of a humpback whale in Hawaiian waters occurred last year, when operators of an ocean recreation tour spotted one in Honokohau Harbor near Kona on the Big Island on Aug. 30. The tardiest appearance of the last 15 years happened in 2005, when the first humpback was spotted on November 11.

The first humpback whale of the 2013-14 season, spotted on Sunday at 7:36 a.m., did a fluke-up dive in front of excited crew and passengers on board Pacific Whale Foundation’s vessel Ocean Voyager. The sighting of the adult whale occurred about two miles from South Maui’s Molokini Islet, as it was heading north in the direction of Maalaea Bay.

“I was the first to spot a single blow on our way out on the port side,” said Capt. Gabriel Wilson of Ocean Voyager, in a news release. “I couldn’t believe it, so I headed in that direction.” 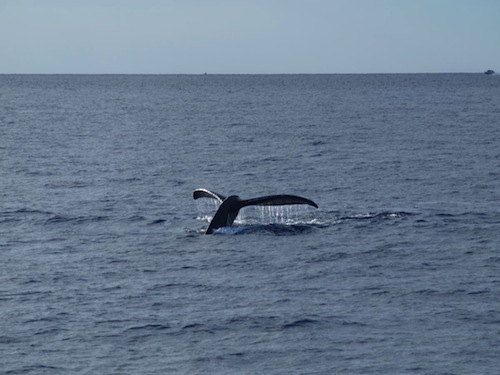 Hawaii’s whales of winter don’t arrive all at once. After summering and feeding in the coastal waters of southeastern Alaska, thousands of North Pacific humpback whales spend the fall making the 3,000-mile journey south to mate, give birth and nurse their calves in warmer waters where they are protected. Scientists estimate that out of more than 20,000 humpback whales in the North Pacific, an estimated 12,000 make the journey to Hawaiian waters each fall.

The whales arrive throughout the season, moving in and out of Hawaiian waters through the winter. Peak humpback whale viewing months in Hawaii are January through March. The last remaining mothers and their calves usually depart our Islands for Alaska in May.

The National Oceanic and Atmospheric Administration, which monitors whale activity in the Hawaiian Islands Humpback Whale National Marine Sanctuary reminds mariners to keep a safe distance from these 45-ton visitors. The sanctuary, which lies within the warm, shallow (less than 600-feet deep) waters surrounding the main Hawaiian Islands, constitutes one of the planet’s most important humpback whale habitats.

The best way to see Hawaii’s humpback whales up close is aboard a whale-watching tour. In recent years, though, thanks to an increase in the number of whales gliding along in the channels between the Hawaiian Islands, it has been fairly easy to spot them from the shoreline. For shoreline recommendations, check out HAWAII Magazine’s Landlubber’s Guide to Whale Watching in the Islands.

Humpback whale breaching off Maui in 2008. Photo by David Croxford.