Is there still Kilauea volcano vog on Hawaii’s Big Island?

Is there still volcanic smog, or “vog,” along the Kona-Kohala coast? When we last stayed in Keauhou the vog arrived around 11:00 a.m. and never left. Would another island be a better choice to visit right now?

The answer to your first question, Wendy, is “yes”—vog is still often present along the Big Island’s Kona-Kohala coast.

“Vog” has been a familiar term to Big Islanders since 1983, when it was coined to describe the volcanic smog emanating from Kilauea volcano’s east rift zone eruption, occasionally drifting 40 miles north to the town of Hilo. Vog is formed when sulfur dioxide—a colorless, noxious gas naturally produced by volcanoes—combines with oxygen, moisture and sunlight creating a murky haze.

Kilauea’s east rift zone eruption continues to this day, producing vog that primarily drifts east out to sea. But for the last 15 months, a steam and ash plume pouring from a vent at Kilauea volcano summit’s Halemaumau crater further south has been spreading vog to the west side of the Big Island—and on rarer occasions, the rest of the state.

Where the vog ends up on any given day is up to nature. Once out of the Halemaumau vent and in the atmosphere, vog is at the mercy of the Hawaii’s prevailing southwest-traveling tradewinds, or lack thereof. 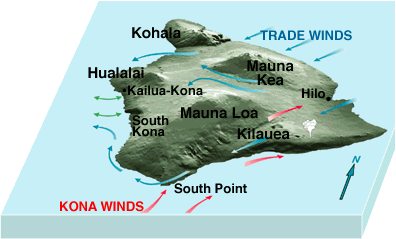 The tradewinds carry the vog south and around the southern end of the Big Island—indicated by the blue arrows in the graphic (right)—before lighter north-traveling winds blow it north. Blocked from prevailing tradewinds by the height and mass of Mauna Loa, the vog settles in the Keauhou and Kailua-Kona area and parts of the South Kohala coast beyond, casting a soupy bluish haze across the sky.

Conversely, when strong south-emanating Kona winds—marked in the graphic by the red arrows—interrupt Hawaii’s tradewinds, vog is blown further north toward Hilo and sometimes the rest of the Islands. Because Kona wind patterns occur only once every couple months, this scenario isn’t common.

Vog pattterns and concentration are also affected by other factors such as air temperature, humidity and rainfall.

Now for the answer to your second question, Wendy. Our opinion is the unpredictable nature of vog shouldn’t discourage anyone from vacationing on the Big Island. The presence of vog won’t affect the Big Island’s diversity of natural wonder and outdoor activities such as snorkeling, stargazing atop Mauna Kea and driving the island’s many scenic roads. And where else in Hawaii can you explore an active, erupting volcano? 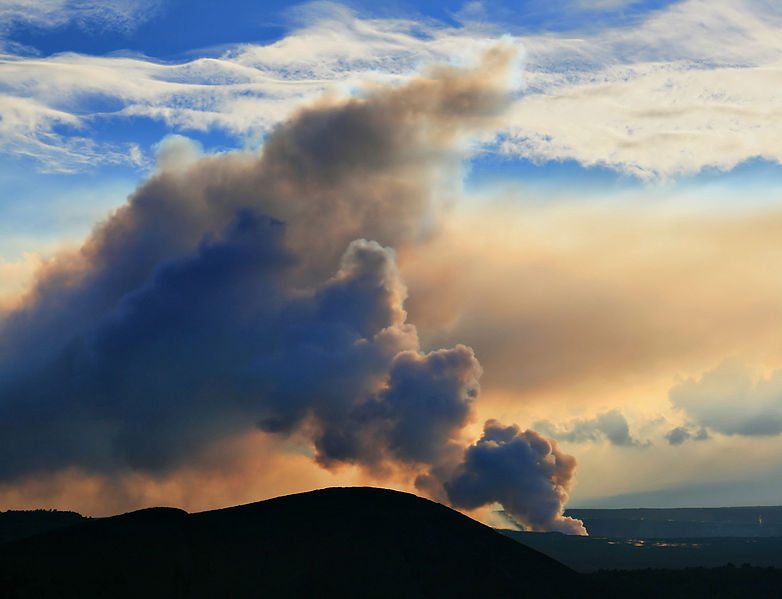 If you still insist on changing your vacation plans because of the vog, any of our other Hawaiian Islands would do. According to the Hawaii State Department of Health, the distance from Kilauea is too great for sulfur dioxide to travel across the ocean in significant amounts. The exception? When the temporary slowdown or disappearance of our prevailing tradewinds causes vog to slowly bloom outward beyond the Big Island to the rest of the state.

If you have health concerns, speak to a doctor before your vacation. Health-wise, the effects of vog vary from person to person. Hawaii Volcanoes National Park monitors current vog and sulfur dioxide conditions on the Big Island and posts the information online here.